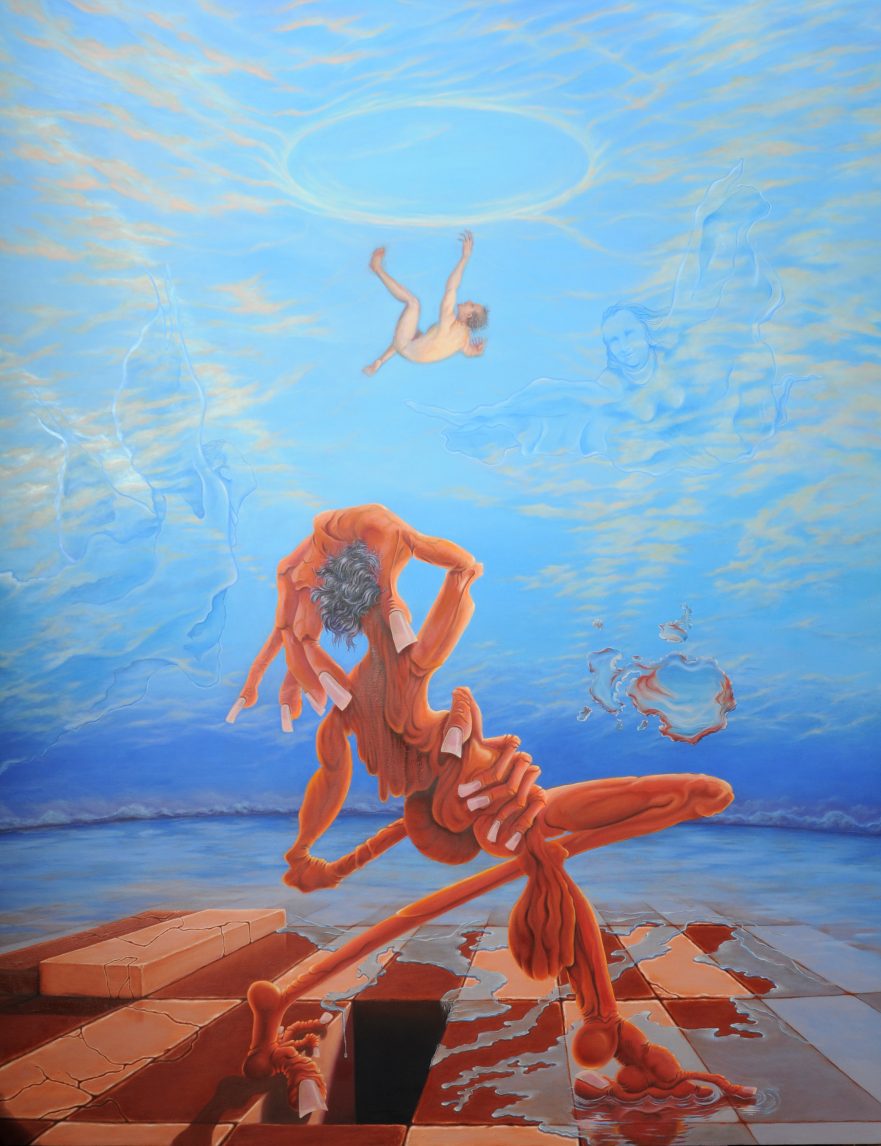 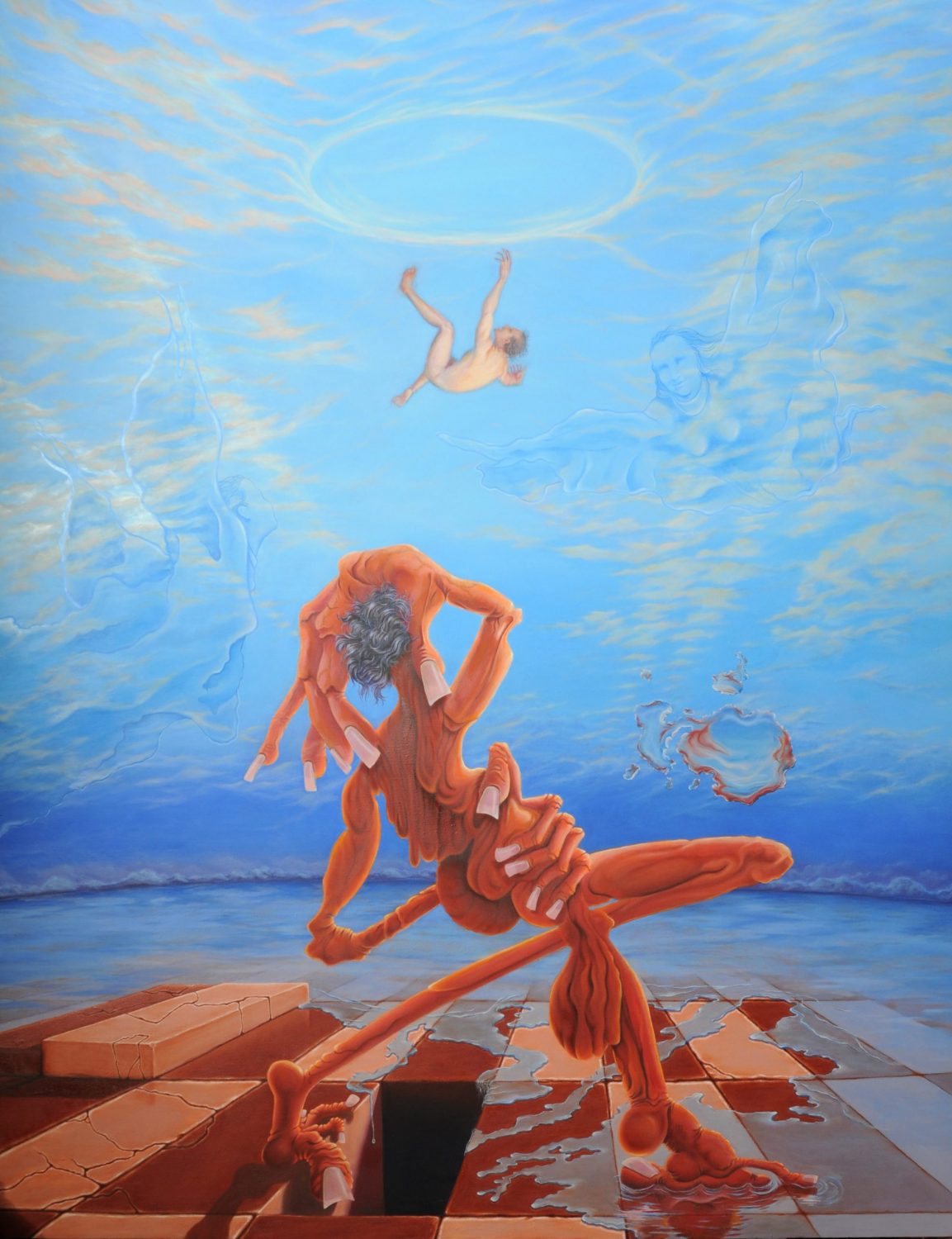 This last week in Mad Swirl’s Poetry Forum… we bereaved a poor blighter of a lost typewriter; we danced in the day of “Laissez le;” we put the stops on a bottle of schnapps; we tripped in a twirl to love a cut girl; we squint sustained to blur self-shame; we gave adoration to a benign creation; we let memories try to forward justify. Forward or back, we write what we lack. ~ MH Clay

I sit in silence this evening
pondering how past events have led up to this day
how each feather of wisdom
drifts silently in the medium of memory;
the know becomes the unknown
thoughts linger for a brief moment
evoking overwhelming fear,
the distant sound of hunting dogs
merges with listless regrets
that never find resolution
but drift in and out of memory
questioning endings and beginnings
forming the garment of the self;
this wooly coat is pulled tight
against a chilly world.

This mirrored reflection stings the heart.
Yet each fully experienced moment
lights the darkness
leaving us no time to question
what might have been,
comfort is found only in hindsight.

I hope to touch vague longings
seeking intangible resolutions
that move through this experience of succession,
I search for another pattern
to hold reason and passion in tension.

I am lost in the marsh of memory
where phantoms lead me into speculation
searching the might have been
I tread over long-dead leaves
seeking lost hopes.

I struggle with these unresolved contradictions
as I move towards a dark future
where shadows juxtapose dissimilar images
erasing the known;
these images intertwine into frightening shapes
forming reflections that are not one but many;
tearing myself from myself
I know this pale future
laughs at these futile attempts
to avoid knowledge too painful to face.

Still, something remembers;
memory is present to a self,
something is explored
someone does this exploring;
or is this feeling a card house
built by the imagination
to protect the self against a cruel night
too severe to meet with an unprotected gaze?

editors note: Our future laughs from a dark beyond. Maybe shades are best for looking into the past? – mh clay

If I were a god by Susie Gharib

I live by a harbor in the Mediterranean Sea,
where a breed of mosquitoes with enhanced immunity
has robbed my Summer and Autumn nights of elysian sleep.
I pray for Winter to kill their unhatched offspring
but coldness that relieves brings pain in its wake:
it displaces birds with sparse and denuded trees,
kills butterflies and other fragile species.
We pay for the sins of Adam and Eve,
but what have birds done to almightiness
that freezes the frail on frosted twigs?

I confess thoughts that many would consider blasphemous.
If I were a god, I would keep warm with the palms of my hands every feathered friend;
I would decree an exodus of butterflies to every household that has to have a winter-proof compartment,
where children and butterflies play as snowflakes perform their annual rituals;
I would forbid killing for sustenance,
so no creature will have to feed on the other in a cycle of violence;
I would erase the stigma of Cain from every forehead;
I would allow man to pluck apples that are sagacious;
I would not inflict everlasting suffering because of a single act of disobedience;
I would be more forgiving.

editors note: Praise this god for a fine and benign, new creation (but, no mosquitoes, right?). – mh clay

Supermodel by Kleio B

The lenses were large,
The mirror larger!
With squinted eyes,
She stared at the mirror.

The sun rays suddenly,
Blurred her squints;
Creating a mirage,
Of a girl gone slim.

She liked this moment,
She prolonged the pause;
Creating an illusion,
Fashionable and posh!

The clouds cleared the image,
But with the squint intact;
She strutted down the aisle,
A supermodel in her thoughts.

editors note: Squint sustained to the opposite of shame. – mh clay

As if the pain were inseparable
from the stagnant air
or the waves of gravity
flowing from her coal black hair.
Her pale skin the color of death
accenting a dagger pierced nose and brow.
Her glossed black lips snarled
beneath cold weapon like eyes all blank
on a dank day in a nowhere song
sung like the random knife cuts
up and down her arm.
Scars that stitched the air with tragedy
and carved reality into the solitude
of her desolate mind.

Her savage Gothic eyes
passionately glaring in despair,
sooth blissfully turbulent
and radioactive.
Every word she spoke
madly adorned the sadness of her soul
with enmity.
For, the enemy was conceptually me
and she was the number seven
dressed in black
playing chess with the devil
like a character in a Bergman film
tattooed to her left thigh.

I wonder who promised her salvation
cashiering in a drug store at Bar Harbor, Maine
where I stopped in for a beer
all parched and worn
on a warm summer’s day dying
as the sun wept crimson sighs setting
behind dark magenta clouds on the horizon
and bled.

Its tears collected along the razor’s edge
when the red droplets flowered and flowed
and I know she wanted to kill me.
I would be the revenge
for a dark love crafted in her crazy dreams.
Yet, I wanted to tell her that I loved her
but could manage only a mollified pity
that felt dirty and shitty
so, I had to get away
and though suicide may save the last cut girl
I’m hoping somehow this poem
might keep you alive.

editors note: Love this one and run for your life. – mh clay

Perhaps I will dodge the bullet and not pull the cork from the bottle and say screw it now I will not awake with a smell of peppermint schnapps fluid.

Perhaps I will remember the steps while the clock strikes twelve as I prevail, driving nails into that craving beast that dwells inside of my fragile frame of a shell, so I will not feed the hunger of that beast inside.

To be happy I left the dry river, trees without leaves that bare no shade, no more quivers nor heaves from cascading beer cans and whiskey bottles shadow lingers, step by step I see clear, no more fears, I maintained as the seasons changed and words of my peers made me brave to fight the crave.

When Spring is in
the air, but not quite arrived,
when the King’s Cake is naught but crumbs,
after Endymion and Rex
have strutted their stuff,
we will endure
the fuzziest examinations of ourselves,
the day after we have hoarded
all those bejeweled singing strings
and rolling doubloons, but
in the meantime,
let the good times roll!!

It’s a universal feeling of loss
forlorn longing,
an unfilled void
defying sense or wisdom.
For some it malingers
a few weeks, months.
For others
it never ever leaves.
There is no end to it—
malingering for years.
We miss a voice
the touch
a ragged smile
a telling word.

Akin to the emptiness
a famous poet
feels after separating
from his portable type-
writer lost
between our campus and his home
in New York City.
He called me often–weeks
& months
still missing
his writing companion.
I called him some
to be in touch.

More than a year
later we met
I saw for a palpable
second in his eyes
his need to hear about
his help mete.
My friend, the poet,
is now gone.
I try to assuage our losses
–the poet’s and his portable typewriter–
by bringing us together
in lines of this poem.

editors note: Whatever we use to bring the muse, it hurts so much to lose. – mh clay

This week’s Need-a-Read comes to us from Mad Swirl Contributing Writer Mark Benedict.

Here’s what Short Story Editor Tyler Malone has to say about this wild story:

We think “Summer Creatures“ is pretty foxy… for a story, of course. But don’t take our word for it, give this one a look-see for yourself… 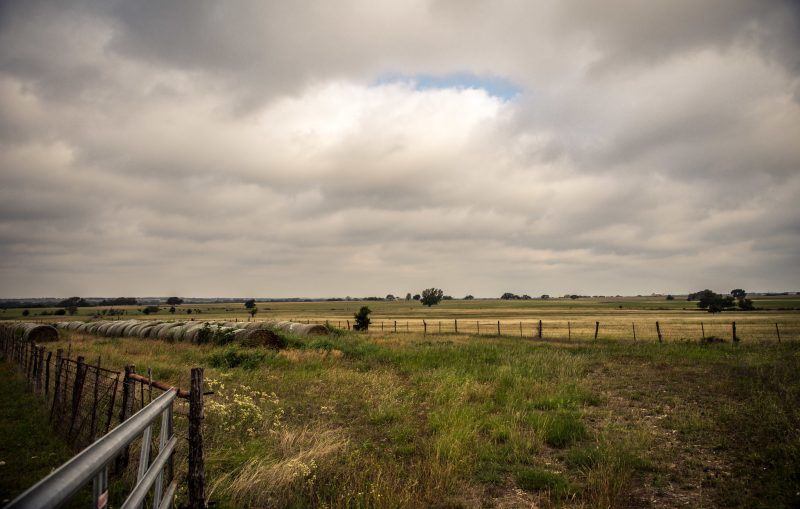 (photo “Oh, to Be an Animal” by Tyler Malone)

Jasper shrugged. What was there to smile about? In another month, it was back to stupid school and no friends and dumb teachers. Not to mention that the fox sanctuary wasn’t exactly his idea of a thrilling summer job. He liked the foxes okay, but it wasn’t like he sat around all day cuddling them. More like cleaning up their turds. Also, despite the dumbbell courses they put him in at school he was smart enough to realize that Anna, blonde and earthy and a year older, would never like him even as a friend. Except later that very same day he started to wonder…

Wonder how this one will end? Wonder no more! Fluff up that tail & get the rest of your read on here! 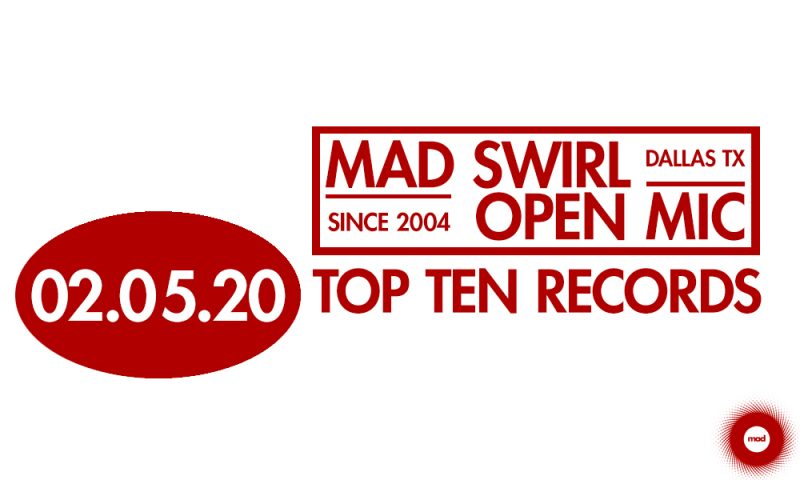 This past 1st Wednesday of February (aka 02.02.20) Mad Swirl whirled up our open mic madness! Once again we did our thang at the historic Top Ten Records! HUGE GRATS to TTR for opening their arms to us Mad ones & shout out to all you mad poets, performers, artists and musicians who helped swirl us up some googily madness!

Here’s the Mad ones that contributed helped us Swirl-abrate by sharing their poetic & musical gifts with us: 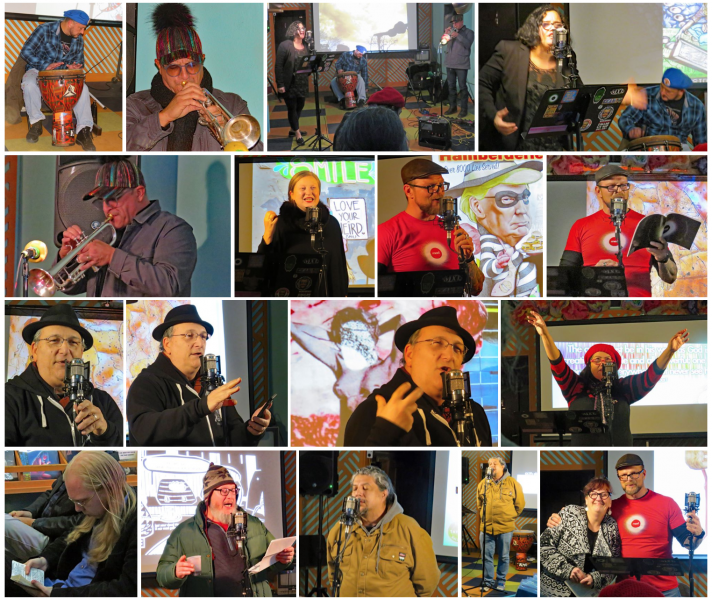 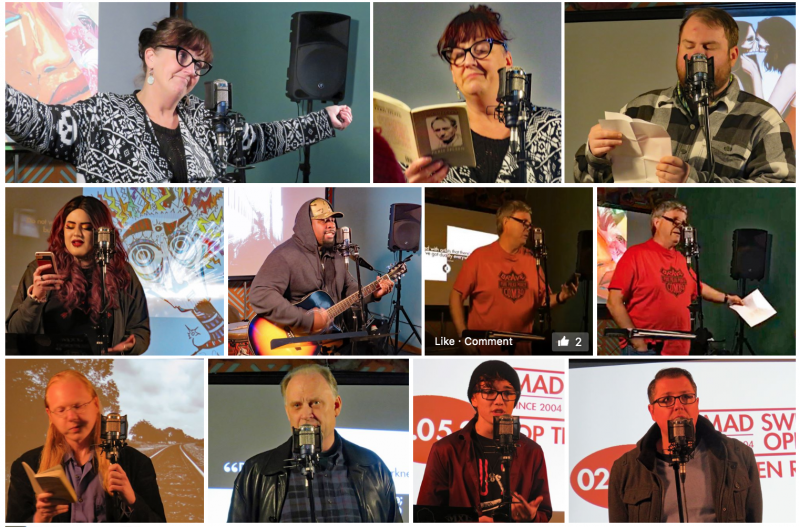 Thanks to ALL WHO CAME to support our creative collaborative love-child & share in this lasting night of poetry and music!