“Stare, pry, listen, eavesdrop. Die knowing something. You are not here long.” 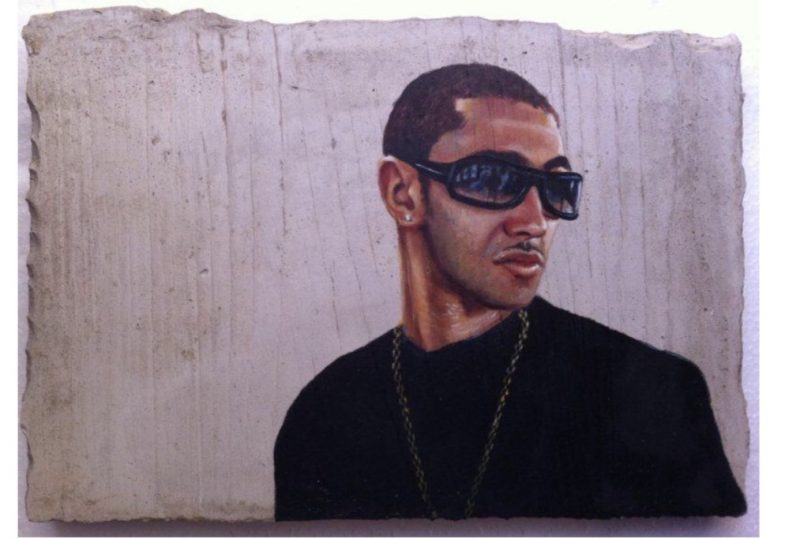 This one concludes Mario’s feature Mad Swirl set. But don’t fret… we got another featured artist lined up for you to feast your eyes upon! Stay tuned…

To see ALL of Mario’s mad-nificent works, as well as our other featured artists (45 total!), visit our Mad Gallery!

This last week on Mad Swirl’s Poetry Forum… we felt the flare of mobile air; we postponed dinner for the insect winner; we gave up social mores in the fog of smokers’ wars; we recalled the prayer of a slug slayer; we entertained the odds of belief in projected gods; we wrote to find the good in being blind; we had sex and music played after she said, “cavalcade.” We pull perfection from word selection. What rhymes with…? ~ MH Clay

Get Lucky in Kentucky by Jason Baldinger

Writing a Letter by Ahmad Al-khatat

I will be writing a letter
to nobody brave or I know
I want to say I am sorry
for the ones, who hurt me before

I know that life is more
than one locked door
perhaps, my heart is the
house with a broken lock to protect me

yet, my enemy wins over my
innocent moves, his words
are sharp knives, and my answers
are the seeds of the plants in heaven

being blind means, you are
gifted, you just believe in the
ones who wish you death
and nothing else of good in darkness

editors note: A sad post to an address unknown. (We welcome Ahmad to our crazy congress of Contributing Poets with this submission. Read more of his madness on his new page – check it out.) – mh clay

IF IT SERVES by Tony Gentry

Feeling contrary
that night at the observatory
we looked down instead
found a latch to a room
where the projector and its timer
played the ghosts that stalk our woods
the speaker that whoops
its echo in the trees
that busloads come to see and hear
with gifts and totems and tufts of hair
the musty place so long abandoned
its makers lost in the myst.

But you shot me that look —
Yes, that look was a gift that said,
“No, why would you? Leave it so.”
Wiped away grime at the skylight
to see them twirl and marvel
their lanterns like bobbing fireflies.

But no, I must have dreamed that.
Went back later and could not find the door.
In the dark, though, an image played on my face,
pilgrims said I seemed inspirited, they touched me.

So then I grasped your reticence.
You don’t remember, do you?
But, of course, it was a dream!

And you said, with a shrug,
as you turned down the path,
“In the end, what does it matter
if this pageant in the woods
is just some artist’s cartoon?
If the only gods we know
are simply handmade projections?

editors note: Scary or exculpatory? It was an image of the thing not the thing itself. Boo-lieve it! – mh clay

editors note: Sanctuary comes in all forms… so does evil. – mh clay

The smoke from a cigarette bleeds exultant and haphazard,
its white length a smooth segment of time during which
the celebrant takes their pleasure, as with a cheroot,
notionally after sex, or before gunfights
in The Good, The Bad, And The Ugly.

Once we had no option but to be casually asphyxiated
by the thick rolling upper deck smog
if we couldn’t find a seat below
on the 19A to school.

Now outlaws gather outside Grogan’s
in reduced and disenfranchised bands.
Music wails, the camera frames each in turn;
disgruntled, twitchy, about to fire.

editors note: The shoot-out between smoke and smoker. Smile and draw. – mh clay

feeling lonely and
alone
on a hot summer afternoon,
no one to play with
or talk to
nothing I know to do–
I sat on the walkway
beside the Larson’s house
next door; ants began to
come up out of cracks
and the little volcano-shaped dirt
piles, a vast horde writhing
on the plain of the walkway
as other ants
with wings
flew in out of the
blue sky and
a battle began,
squadrons of winged ants
attacking the ground forces
a ferocious struggle
like Hastings or Waterloo
the Queen of the wing-less
crew rolled over
her winged foe,
the dead piled up
the battle raged
the afternoon slid into
shadow;
I did not hear my grandmother
call me in to
supper.

Quietude yearning for mobile air churning
as the stillness takes root in the soupy skies,
mountain tops wreathed by a bluish haze,
the tepid clouds growing tired and sleeping,
days and nights beset by the same quiet air,
the sagging sun thirsting for a drink of water,
a plunge into the glassy, invigorating seas,
a paradise in the cool from the balmy air
where the angels sing the same old song of yore,
where the stillness lays in the lazy skies,
the dawn of the days in its old familiar mood,
going through its routine in a halfhearted way,
Mother Nature dancing the same old dance again,
looking for the mobile air to break loose
and dance with the wind around the hilltops.

Alas, a stirring in the upward skies,
a breath of air to make the barley dance,
a sympathetic churning prescribed
through the mercy of the Gods,
an assemblage of the hot and cold,
a westbound air rolling with the flow,
a new sky of vigor and life and mobility,
the brewing of the wizards from aloft,
a gentle stirring of a compassionate nature,
the tears of the invisible sky born giants
with their sob stories and gentle crying,
their newfound happiness in their home,
the answer to their supplications,
the restoration of the air, the invigorating air,
the return to life as it was in the beginning,
the spirit moving across the waters,
the winds across the glades,
the breath of the gentle giants,
the mercy of the Gods,
and the mobility of the air,
thanks be to Mother Nature
and the way she moves.

editors note: A wonderful wind up of words for wind. – mh clay

This week’s featured Need-a-Read comes to us from our very own Short Story Editor (& Contributing Trifecta-ist) Tyler Malone!

“Our hearts are like teardrops in the flowing waters of life.” 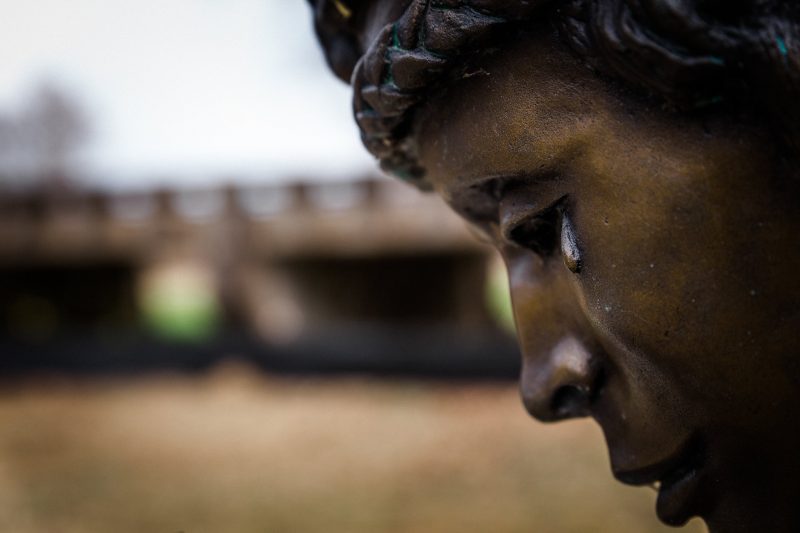 Rise to the click occasion & get your read on right here! 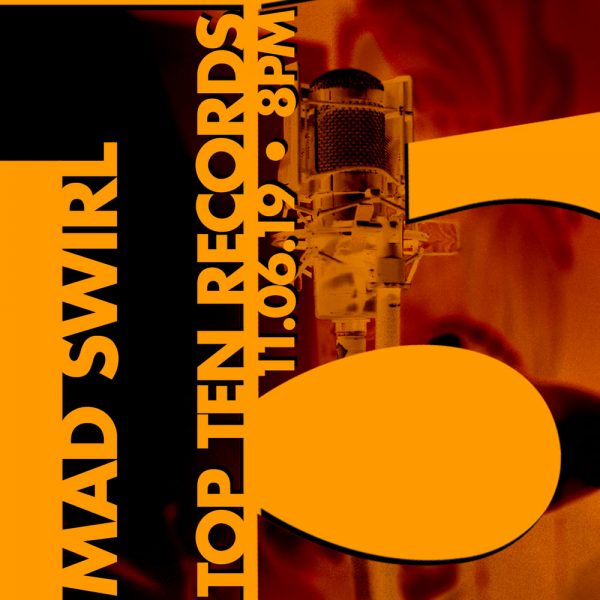 Mark your calendars to join Mad Swirl Open Mic THIS 1st Wednesday of November (aka 11.06.19) at 8:00 SHARP as we swirl it up at once again at Top Ten Records!

This month we will be Swirl-abrating our 15 year of open mic Mad-ness! We can’t believe that all those years have slipped by since we first hosted our event at Absinthe Lounge back in 2004. Such fine Mad mic memories from back then and a whole lotta new ones to make!

To kick things off, Chris Curiel’s Swirve will start us off with some Mad musical grooves. After that, hosts Johnny O & MH Clay will invite all y’all to join in & share in the Mad Swirl’n festivities.

Top Ten Records’ mission is to develop and sustain a piece of Oak Cliff history as a resource for media literacy and cultural study, while preserving, restoring, and making available to the public an archive of music and film through the retail shop, the library project, the Texas Music Archive project, and small cultural events like concerts, film screenings, workshops, and classes. www.toptenrecords.org