Ode to a Drunken Muse by Paul Hellweg

Ode to a Drunken Muse, published by Alien Buddha Press, is a collection of poems by Paul Hellweg. I love Hellweg’s play on the Keats odes, though we can expect that he has other ideas in mind than dancing around reciting verse with Greek boys.

Many of the poems are loaded with heft. I hear the hollow emptiness of lonely moments in these pieces. But I also hear Hellweg’s ironic voice. What I especially like about this collection is that the poems are enjoyable to read. Many are terse, packed with heavy thoughts on life, on death. Or reflections on other writers and artists. They are tuneful and ring in your head. 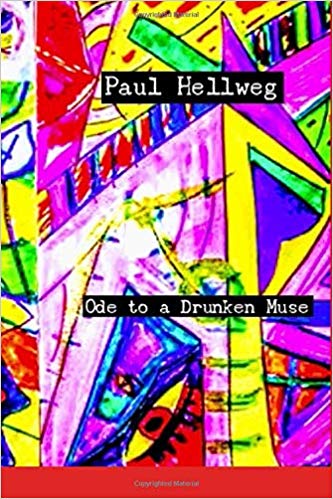 In “The World is Divided,” Hellweg writes:

The world is divided between
those who think and those
who feel, wrote Graham Greene.
Pity the poor souls who live deeply
in both worlds, belonging to neither,
dreaming of elusive hearth and home,
love too incomprehensible to long embrace.
Beauty, for them, curse and goddess
warring muses pull in nine directions.
Normality both bane and goal,
life too short to come to terms,
forgetting everything, remembering all,
hungry, always hungry.

What a profound notion. And I think the writer knows he dwells in both worlds. He is a thinker and someone who can’t contain his emotions. I can relate to that. I’ve often been accused of thinking too much. Of being too analytical. And it’s not uncommon for me to be struck with emotion, my throat choking, my eyes tearing. And over something small. A memory. An old toy of one of my sons. An old picture. And I know not everyone is like that. I have plenty of friends who don’t get gripped by that kind of feeling. Or friends that aren’t blown away every day by things like the infinity of the universe, the incomprehensibility of life. How we sit in the fold of an infinite cosmos going about our everyday lives concerned with petty things. How we hold grudges over stupid shit and get angry when someone tries to claim a piece of our little world. But there I go again, thinking too much.

To be sure Hellweg isn’t a one-trick pony.

He can make a full turn into the unexpected. In “The Great Mystery” Hellweg enacts a drunken scene in which he has an epiphany. Hellweg reminds us that in our drunken states, we can also achieve the highest thoughts. We can be pure and holy even after a few whiskeys and beer.

Lit up my altar to Kuan Yin
Chinese goddess of mercy
five candles
her white porcelain figurine
smiling at me,
lit up myself too
five beers
five Scotches
now
half-past drunk
all the candles burned out
but the one
in the center
highlighting the sacred secret
between her thighs
makes me wonder
what it would be like to …
and
I feel like I’m dangerously close to
blasphemy
but at least the goddess of mercy
doesn’t condemn to eternal hell
those who don’t believe
or are disrespectful,
and as she smiles
that beatific smile
I know what she means,
her hands cupped in Yoni
make me understand
that the Great Mystery
isn’t sex
but
life itself.

And who hasn’t traversed from holy to horny and back to holy again before letting out a long exhale of whiskey breath? Who hasn’t stood before a mirror at four in the morning looking into their retinas, transfixed by what they see? Who hasn’t felt the presence of something so profound, you run away scared of your own reflection? A tickle of the neck that sends you back into the living room where the whiskey waits. It’s frightening when you come face to face with who you are. When, for a moment, you might see yourself as others see you. Maybe realize that sometimes you’re an asshole. And then you forgive yourself. You’re a decent person, struggling with your own demons, just trying to make it through the night. This life shit is complex.

I especially like and admire the full range of emotions and reflections that Hellweg explores in his poems. Frankly, I read them as the mature thoughts of a person who has tried to take a measure of themselves. A person who has grown and knows that growth is not a destination but a constant process. In “Party Animal #2” Hellweg writes:

Went to a party last night,
second time in as many years.
Room heavy, sweaty, warm,
jostling, bumping, squeezing through,
“excuse me” the most frequent words,
no place for a wallflower to hide.
Free wine, all you could want, but
ate dinner before, too full to drink,
too depressed to chat,
too self-conscious to flirt.
Wanted to leave immediately,
forced myself to stay an hour,
remembering my therapist’s words,
people unwilling to face their fears
risk living
isolated and withdrawn lives.
But what about those of us
who go out and brave
that bewildering world
other people inhabit, only to find
it’s not for us?

Tucked in the wisdom of Hellweg’s poems, there is a lot of play between deadly serious and poking fun. Sometimes there’s great wisdom in just drinking and throwing caution to the wind, as Hellweg asks in “What is?” What is what? What is it all about? What is the point? What the fuck?

If I’m going to be a poet,
now’s my chance,
two beers, two Scotches,
and one more at the starting gate
makes this the perfect time to be
human and honest
and blunt about
life
and pain
and horror. Ah,
fuck it all anyway,
I think I’ll have another beer.

In the tradition of Hemingway, Celine, and Bukowski, Hellweg makes writing poetry look easy. Like it just issues from his pen effortlessly after a few tumblers of whiskey. But everyone who’s ever dared to write words down knows that isn’t how it works. It takes thousands of hours of writing and years of effort to cast away our crutches and write with a modicum of freedom. In “Lisa & Garrett’s Wedding,” Hellweg writes:

Hemingway liked bullfights
Bukowski the horse races
F. X. Toole the boxing matches
Saroyan gambling
and so on,
all of which have more life
than my preferred entertainment –
reading their novels,
and I understand that
if I want to breathe life into my writing
I have to breathe life into myself.
I need to change.
Tomorrow night
I’ll be a groomsman
in a friend’s wedding,
so why be my usual self
shy, retiring, withdrawn.
Why not be someone else
and just pretend he’s me?

The bar was beer and wine only,
but a friend brought
three flasks of Black Label,
which I enjoyed to the point
of falling and breaking my ankle, and
as I sit here now in pain, I thank
the universe for granting me
one night of freedom from myself.

And like his heroes (and our heroes, too!), Hemingway, Bukowski, and Celine, Hellweg finds himself the victim of a little literary theft. But he doesn’t go to the Library of Congress or call a lawyer. He rejoices. In “Plagiarism is the sincerest form of Flattery” Hellweg writes:

Thirty-two years a
university professor
preaching about the perils of plagiarism,
then tonight read a poem
in an online ‘zine
that borrowed lines directly from me.
Move over Hemingway,
move over Bukowski,
move over Céline,
you ain’t the only ones
with words worth stealing.
I’m giddy with excitement,
I’m drunk on joy (well, Corona too),
I feel like I’ve finally arrived …
I’ve been plagiarized.

I suggest you get a copy of Ode to a Drunken Muse. Maybe have a whiskey in your grasp when you’re reading the poems. Maybe not; that’s up to you. Hellweg’s poetry is enough. His honesty is bound to catch you off guard and then set you at ease. We’re all uncertain of ourselves, reaching for meaning. Some of us drink too much. Some of us care too much. We think too much. But it’s damn good to know there are others out there with the same affliction.

And for this we are grateful.