“I give thanks everyday that I’ve been able to take my craziness and make it work for me.” 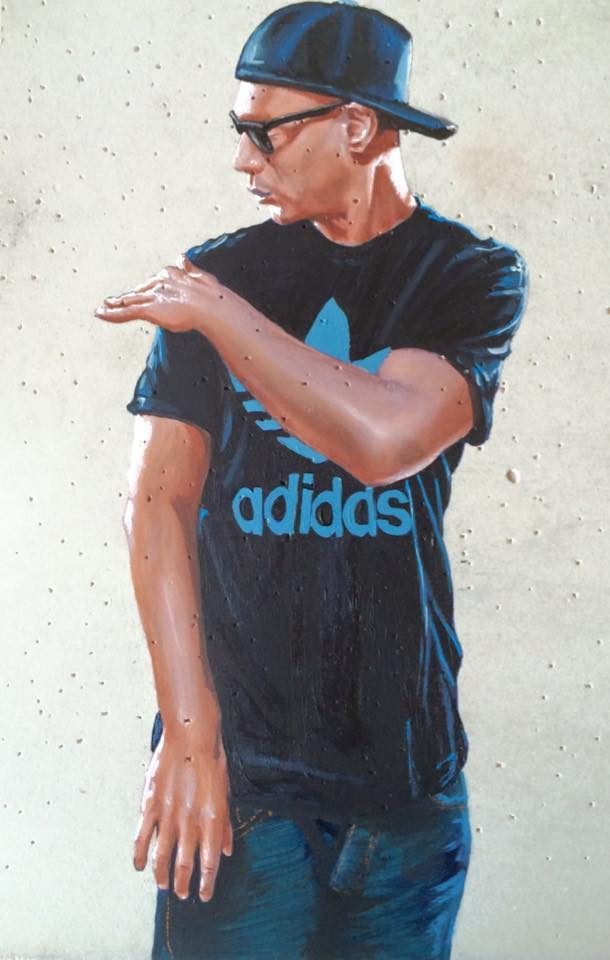 To see ALL of Mario’s mad-nificent works, as well as our other featured artists (45 total!), visit our Mad Gallery!

This last week on Mad Swirl’s Poetry Forum… we ate write on an off night; we bore the breaks of table stakes; we love longed more behind closed door; we saw one slash and burn for guaranteed returns; we strummed recovery from cord discovery; we watched a feast of murder on beast; we blasted a sad and soul gone scene in hummingbird red and asylum green. So differently written, these many missives; all with words in common. ~ MH Clay

Newly dead Ernie throws his scrambled brains
Quick into the sky as hummingbird turns
Red the predominate color, the second in command
Is green, sick green looney bin locked rooms
Long hallways with echoes
The window’s grasping fluctuations
Touchy inside seconds of electroshock therapy
For a minute, only banshee shoulders for the lightning struck

Nostrils flatulent with snotty brain bubbles
Pupils staggered in terrorizing mirrors
As the soul looks at the body bag
“I love you.”
In the last molecule exchange
In the last biting fire

editors note: Out with a bang. Farewell to the bag and the cleanup crew. (See another mad missive from Chris on his page; something on the lighter side of lust and horticulture – check it out.) – mh clay

Gift of the Autumn Forest by Peggy Turnbull

six crows make
a hexagonal shape
around him

obsidian feathers
like priestly garb
at this fresh altar

editors note: This murder brings no conviction except that greed is good. – mh clay

Nothing Is Best by Randall Rogers

I discovered the lost cord
strung up
in Iowa coming to terms
with the thought of my
non-death chiming
at the fifteenth fret.

A Day In The Life of Cobra Commander by Roderick Richardson

Decades of exploiting the
Poor and raw-dogging
Regulations as the CEO
Of everything made him
Countless billions.

Make no make, he already rules the world.

So, he puts on his costume
Again to play his favorite game.
Fascist religious extremist warlord!

A game to create a civilization
Through the teachings of Apep.

Wednesday, he destroyed a
Third-world country before
Finally losing to G.I. Joe.

“I’m getting better at this!”
He said to himself.

Friday, he puts on his suit.

Goes to D.C. as the All CEO

Demands that his losses
Get returned to him by Monday.

I am scared that you know how to leave,
how to get up and slam the front door behind you,
leaving me with all the dishes left over from the meal I made in my tiny apartment on West Main Street.

I am hopeful that you will forget what it means to say goodbye,
and that the door will look less appealing over time

I am embarrassed each time I make a joke that isn’t quite funny,
or send one too many messages in the middle of the night,
because then I think you might know how much I really clutch onto you and stand in between
you and the doorknob.

I am excited each time I see your name,
and it makes me want to jump out my window onto the pavement because I don’t like this sense that this is meant to be and I really have something worth losing.

I am unsure of where you stand;
I see you in the kitchen and want to pull you over,
make you come closer to me,
so I can hold your hand and ask you how you’ve been.

I am helpless to you as I watch you fix all the clocks for me,
because I have never been on time for anything,
and now all of a sudden I am exactly where I am supposed to be.

I am overwhelmed and can’t fall asleep because of the fear I feel about the door being unlocked,
and me, unhinged;
you could wake up and realize that I am a nightmare that you dare not stick around for.

I wish I could erase the door.

I wish I could fall asleep knowing that the door is there,
and you are here and neither is going anywhere.

editors note: If freely come, no will to go. Keep the door unlocked. – mh clay

THE CONFERENCE TABLE by Robert Demaree

When his mother died,
Thirty years ago now,
The principal gave his school
A conference table.
It weathered the abuse
Of ninth-grade boys,
Restored, its polished cherry stain
An elegant gesture of memory.
But he was not surprised to learn
The other day, quite by chance,
That someone he did not know
Had judged it no longer needed
And packed it up for storage.

Where is the little plaque
That bore her name?

You can say these things happen,
That no one had set out
To dishonor her memory.
He has no wish to share
The resentments of the heirs
Of Confederates on horseback,
But he does wonder if
The people in Omaha
Had thought to give
The Rosenblatts a call.

editors note: In the need for remembrance, we are Rosenblatts, all. – mh clay

editors note: Tapped out with take-out, when it’s muse’s night out. – mh clay

This week’s Need-a-Read comes to us from longtime Contributing Writer/Poet/Artist and Associate Editor Mike Fiorito.

“It’s not that we don’t exist–it’s how much do we exist.”

Here’s a few words from his tale “Calling Vito a Guido“ to get your goombah goin’: 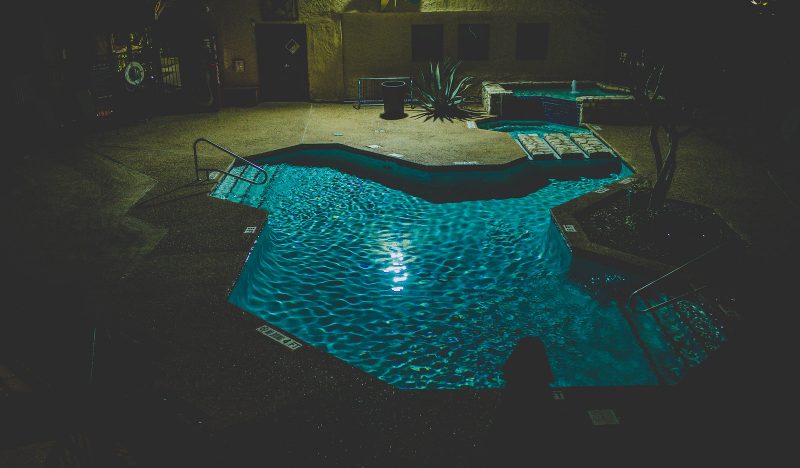 (photo “A Name Written in Water” by Tyler Malone)

Having tied his Capezio shoes, Vito brushes his white slacks and gets up from the chair. He walks over to the mirror in the living room to brush his black hair — again. He tilts his head to one side, looks at himself from the corner of his eye and runs the brush across his coal black mass of hair.

He smirks at his reflection, pleased with what he sees.

Vito leans in closer to admire the blue sparkle of his eyes. He often asks his girlfriend, Gina, to call him Ol’ Blue Eyes, like Sinatra.

“Do you think my eyes look like Sinatra’s?” he asks.

“I don’t know what Sinatra’s eyes look like,” she replies, wincing, like it’s painful to have to discuss this.

Vito gazes at the picture of Sinatra on the wall in the living room. Sinatra is tipping his hat with one hand.

“See, we even have the same shaped mouth,” he says, urging Gina to look at the picture.

“Oh my gawd,” she says. “What is wrong with you? You’re so stupid, Vito. You don’t look nothing like him.”

“You’re just jealous of my blue eyes.” Vito brushes his hair again, then adjusts the gold chain on his neck. Hanging from the chain is a bulky Christ-head pendant…

Andiamo to get the rest of this paisano read on! 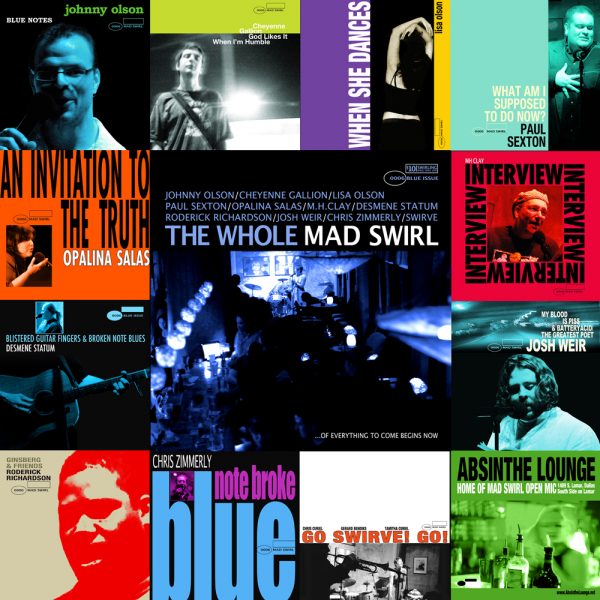 This past 1st Wednesday of October (aka 10.02.19) Mad Swirl once again whirled up our open mic madness! This time we did our thang at the historic Top Ten Records! HUGE GRATS to them for opening their arms to us Mad ones & shout out to all you mad poets, performers, artists and musicians who helped swirl us up some googily madness!

This month we revisited 2008’s Mad Swirl Blue Note Issue. It’s was hard to believe it has been 11 years since we released this collection and thought it due time to resurface this mad-tastic line-up!

In case you weren’t there back in 2008 (or need a refresher), here’s the Mad ones that contributed their poetic & musical gifts for this collaborative project:

Here’s a visual of who is who (HUGE grats to Rosie Lindsey for these mad snaps): 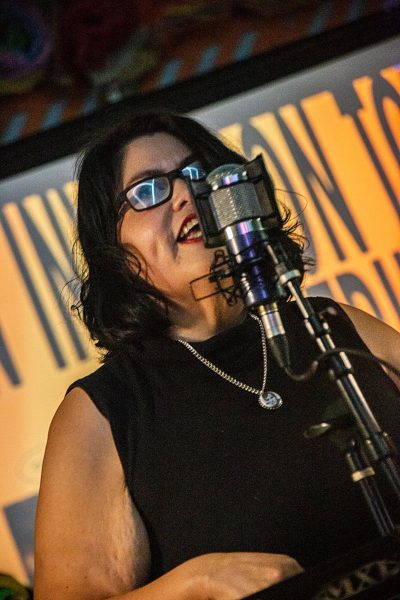 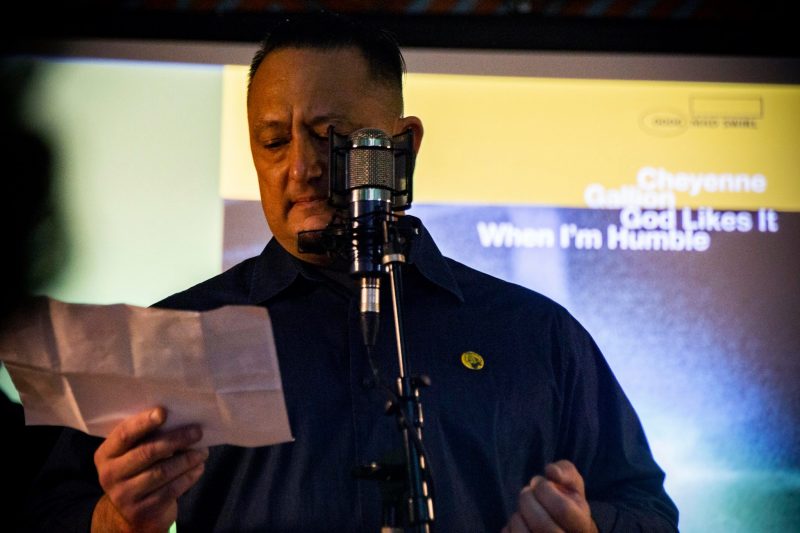 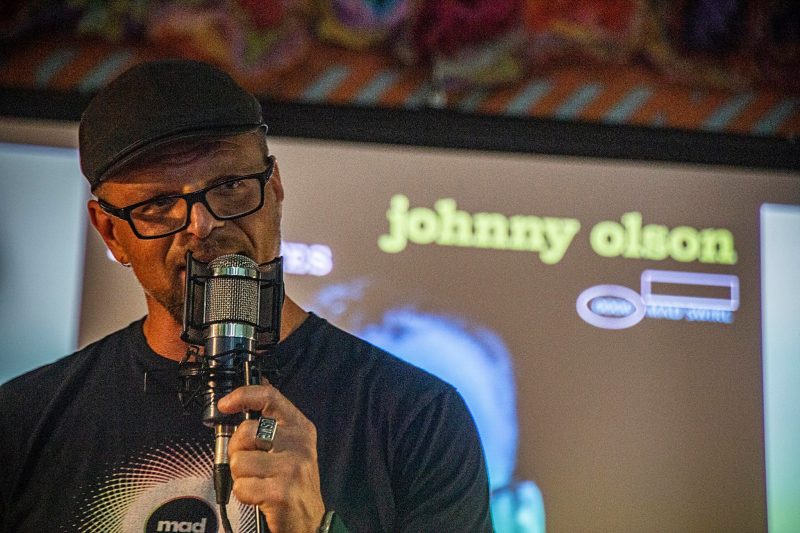 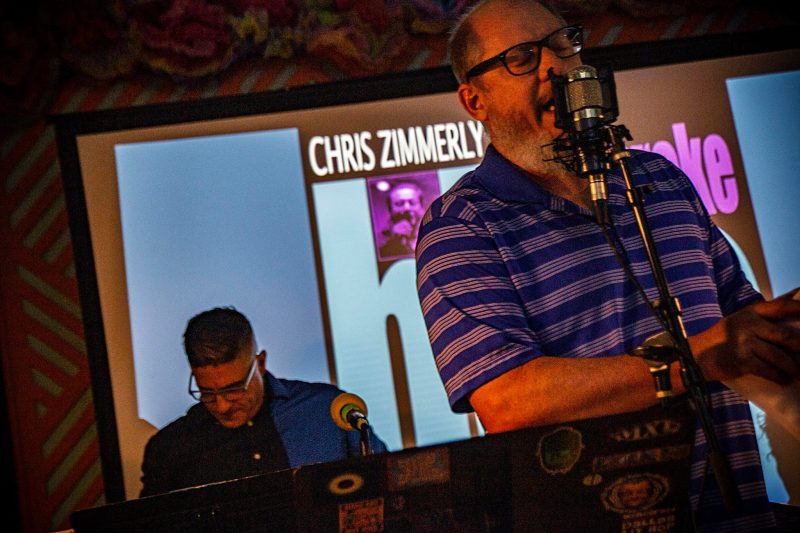 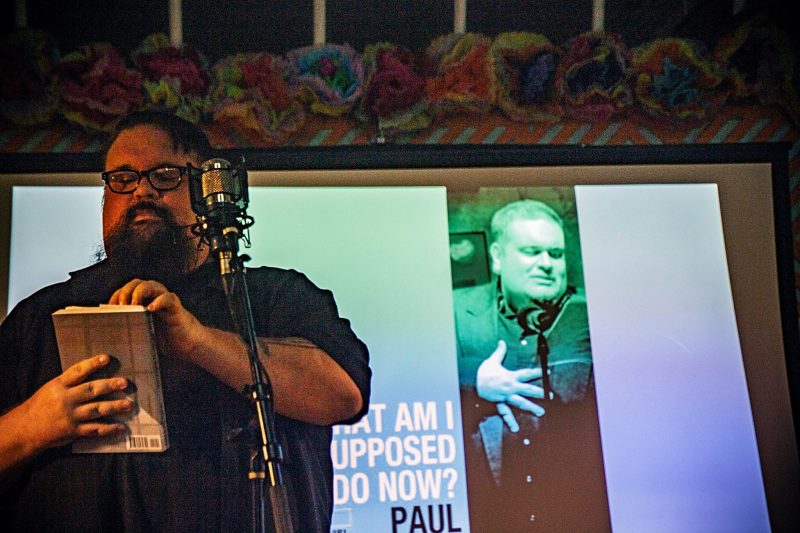 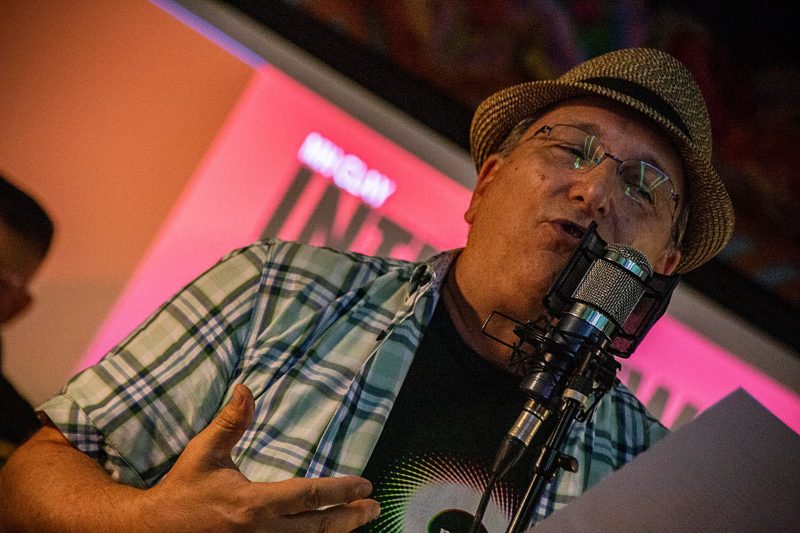 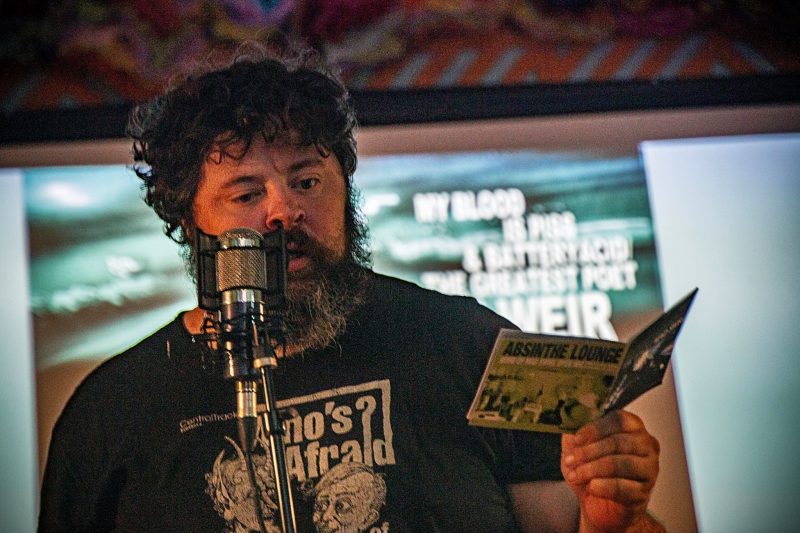 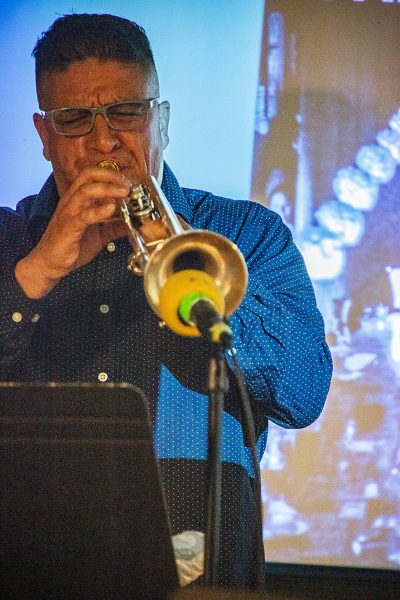 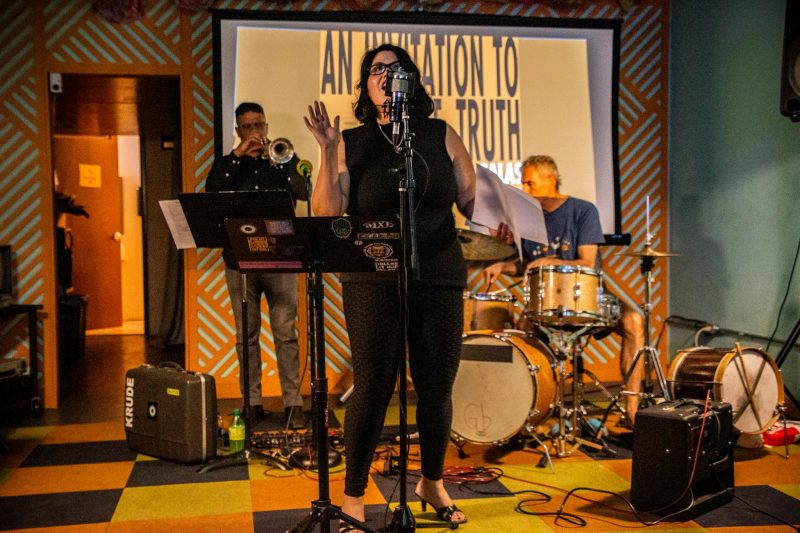 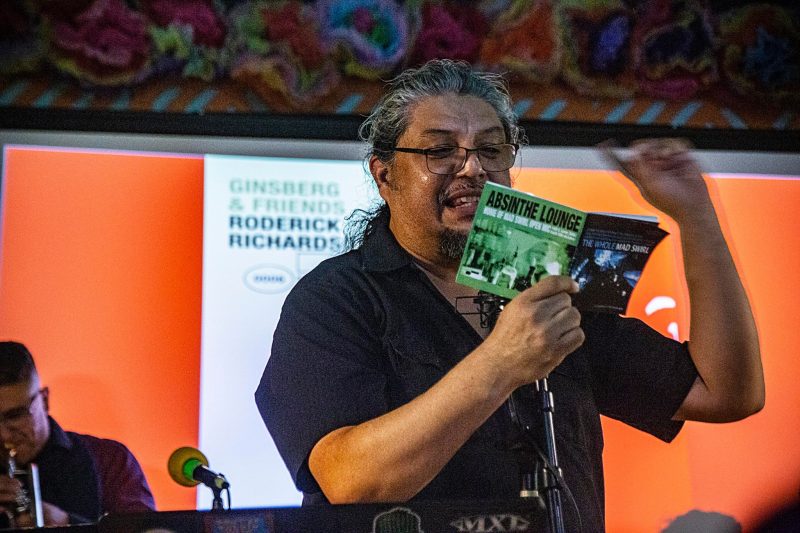 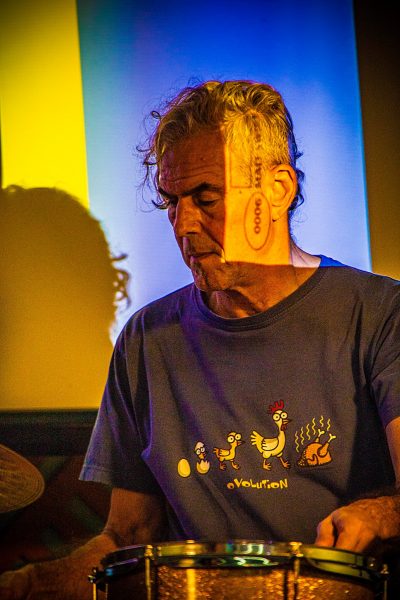 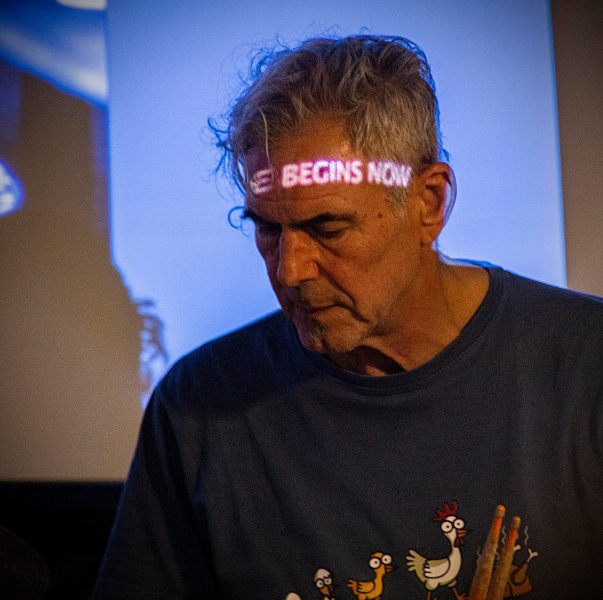 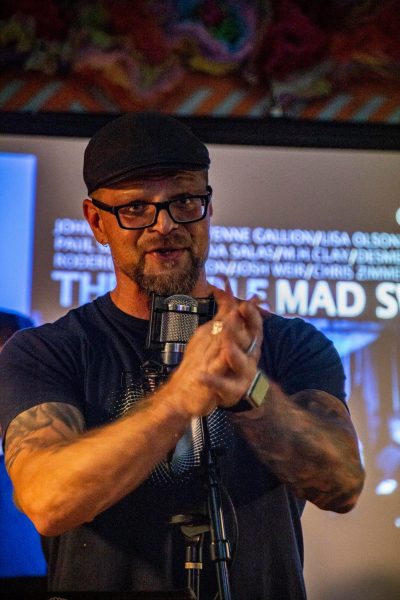 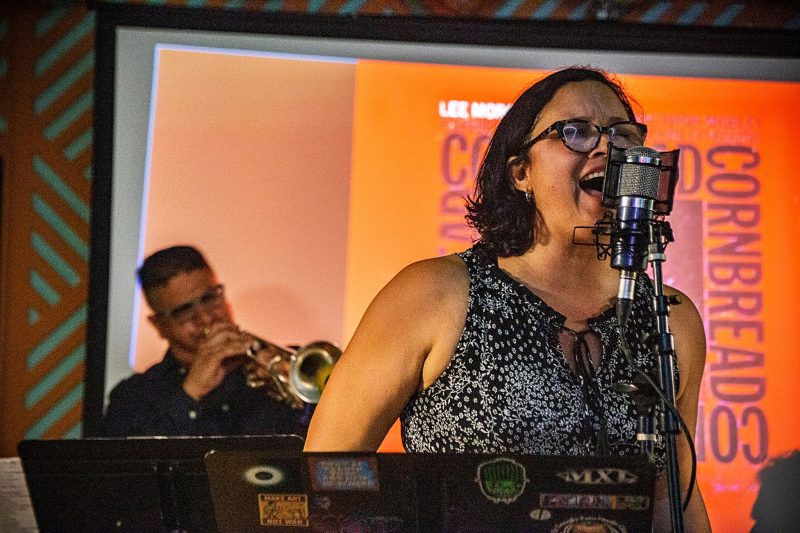 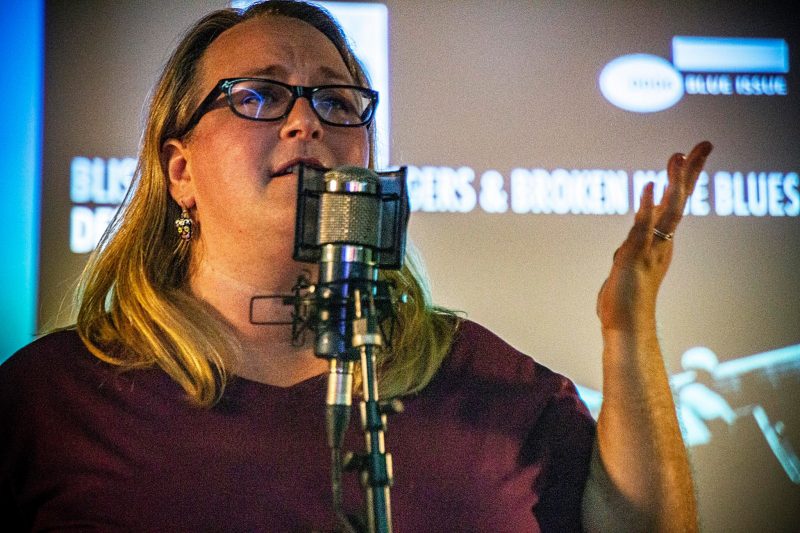 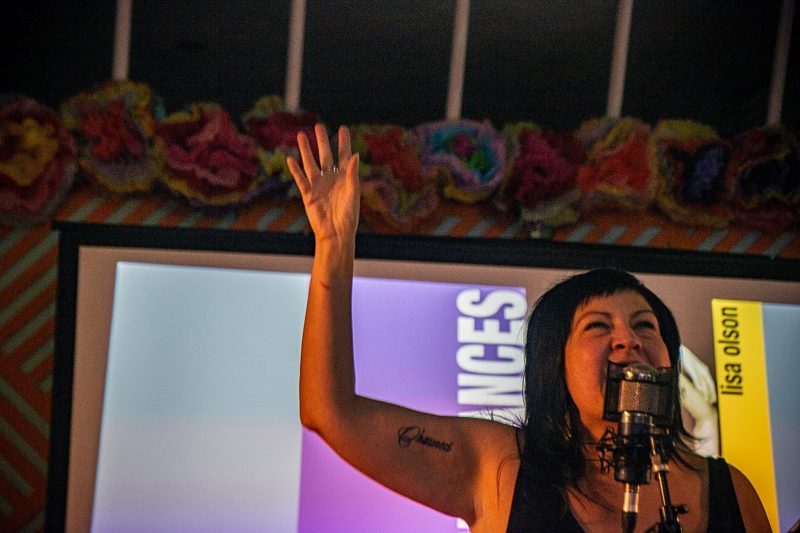 After the feature set, hosts Johnny O & MH Clay opened up the mic to invite all y’all to join in & share in the Mad Swirl’n festivities.

Thanks to ALL WHO CAME to support the launch of our creative collaborative love-child & share in this googily, loving, laughing, lasting night of poetry and music!

P.S. In case you missed the LIVE feeds, your eye can spy on the Swirl’n scenes that was right here…