Unwritten Words That Slide Down The Wall by James D. Casey IV

James Dennis Casey IV (JDC IV) goes by a few names: Magick Gonzo Outlaw Poet, Madman Philosopher, Artist, Pirate, Owl Lover, Cat Lover, and Weirdo. I’m sure there are more things he’s been called or calls himself. But in reading his poetry collection Unwritten Words That Slide Down The Wall, I can see how those names all apply. I’m going to address just a few of JDC IV’s personas as they inform the poems in this collection. You’ll have to get a copy of your own to discover more of JDC IV’s many incarnations.

This collection is a cannon blast of honesty, love, emotion, ideas, prayers and dares. The Madman Philosopher is funny crazy but he’s got a heart as big as Texas. 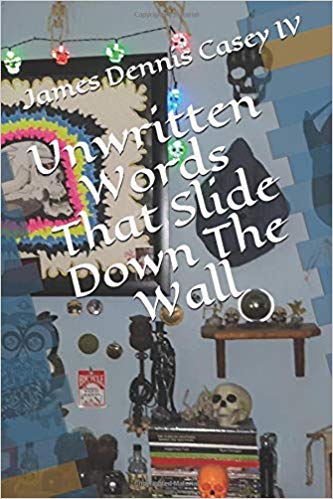 In “If Things Were Different” JDC IV writes:

so many people
would still
write
about me
us

i don’t think
i can be there

There’s no bullshit in JDC IV’s voice. He speaks like a prophet who has consumed nearly all of the world’s oceans and is therefore about to explode. As if he’s wrestled time to the ground and pummeled old age to death with Thor’s hammer.

And when I said ocean, that ocean might just be a thousand rivers of alcohol colliding together into one gushing body of water. You will get smashed, drunk from that ocean. You might even drown. JDC IV might save you. But it’s going to be a reckoning. An apocalypse. You might be born again.

The poem “Joke’s on You” coughs up an oceanic swell of beer and whisky breath. JDC IV’s not going to apologize for it; he’s going to taunt you with it. When you smell that whiskey on his breath, it’s going to shoot right up to your brain from your nostrils.

In addition to The Madman Philosopher, there’s the Artist. A man at once ready to lure us with his rhymes and tricks. A man who’ll punch your lights out and gently lay you down on a bed of grass. He might set that grass on fire if you aren’t careful. But it’s all about the art. The Artist will stop at nothing to make his art. Like JDC IV writes in “On the Rumor Fence”:

Then there’s the Pirate, prepared to go down with the ship. Fuck it all. Slid into home base – used and abused. In “Filters on an Imminent Death” JDC IV writes:

old train rolling 20 sided die
high on everything imaginable
over the years that seem infinite.
only to find myself here
barely 40 feeling like 60
the abuse taking its toll
brittle bones
one good eye
dying feet
I’m gonna drive this train
in flames into a wall
that’s the way it should be
sliding into home base
used and abused like Hunter
on my own
terms
just like
my heroes

In “Lulled Into Submission,” the companion piece to “Filters…,” JDC IV’s Pirate shouts out to the world that he will live without feeling.

How many more years can I live like this?
How many years have I lived like this?
The whiskey talks, but I can’t hear
a word it says.
My body, lulled into submission
by its precious poison…

And who hasn’t felt that way? I read these poems as if I said these things, like I wrote these things. JDC IV captures our inner demons. Maybe they’re demons that have reared their heads in a drunken rage. So be it. This is who I am. This is who we are.

Though he may have a skull of beer in one hand, JDC IV has a flower in the other. While he is a Madman Philosopher, he is also an Owl Lover, a man of wisdom, a lover of all good things. In “Found in a Dream Set Free,” he writes:

There are many perspectives, many lives lived in this collection. And isn’t that what we expect from a poet? Someone who screams from the top of the mountain, sometimes with his breath loaded with whiskey. Tears running down his cheeks. Proclaiming his love for all beings. His fists clenched. Clenched because he’d like to save every living thing on the planet. Maybe even mosquitoes. Ok, hopefully he won’t save the mosquitoes.

JDC IV’s Unwritten Words That Slide Down The Wall is a collection of songs. When I read them it felt like I was hanging out with JDC IV knocking down a few whiskeys, music playing, my feet dangling off of a bridge. I was somewhere in America, somewhere in the universe. There were wizened moments where we spoke with English accents and recited elfin lore. Other times there were sloppy beer fights and accusations. But it was real all the same. We often talked late into the night, falling asleep to the owls howling and hooting.

Get this collection and spend time with it. I’m sure JDC IV’s apparition will appear, offering you a hand, a drink, and his truest insights.