“The voice of passion is better than the voice of reason. The passionless cannot change history.”

Mad Swirl warmly welcomes the photography of our very own Short Story Editor Tyler Malone – though this batch of photos might not be described as ‘warm’… With a stark, deeply saturated and shadowed focus on animals, Malone elicits feeling within us – and he’s subtle with it. What that feeling is… well, that’s a little harder to pinpoint. Something like deep reflection, focus, and maybe a little bit of fear. Something like connection, like looking at the subjects faces and thinking ‘I get you,’ even though they’re a giraffe and you’re a human. It goes without saying that it takes a special kind of mind to evoke deep emotion simply in the way they capture the world. We at Mad Swirl think Tyler has that kind of mind… but that probably goes without saying, too. ~ Madelyn Olson

To see ALL of Tyler’s’s poignantly poetic photos, as well as our other featured artists (45 total!), visit our Mad Gallery!

This last week on Mad Swirl’s Poetry Forum… we DADA’d along with a campfire song; we brought an end to now with then; we sweated and simmered in summer’s hot shimmer; we lugged smug a pug mug; we turned caw to cat wail, crow saw cat to turn tail; we felt no funk while summer drunk; we learned more stuff, but never enough. Sweet endless days, each avenue a fresh embrace. Fast racing days, these words we write, the only trace – that anyone was here at all. ~ MH Clay

A mind inquisitive will find
while looking out upon the world
that myriads of whys unwind
from raveled webs in queries whirled
by skies above and realms below.
There’s always more than we can know.

If contemplating mysteries
of life’s existence here in space
along with astro-histories
within our cosmical embrace,
the awe one feels will surely show.
There’s always more than we can know.

In famous drama by the Bard,
where Ghost is spotted ‘wondrous strange‘
by castle sentries standing guard,
mid ‘sworn to secrecy’ exchange,
says Hamlet to Horatio,
‘There’s more than you can dream to know

‘on earth in heaven, countless things
in your philosophy not taught.’
(And so begin misfortune’s slings.)
To summarize his gist of thought
in passage ever apropos:
There’s always more than we can know.

Some think that memorizing facts,
despite their changing through the years
as seen in how mankind reacts
when ruled by prejudice and fears,
amounts to understanding, though
there’s always more than we can know.

The gladiola in delight
will bloom as forces lure her on.
Bright stars o’er-sprinkle dark of night
but fade from sight with breaking dawn.
Thus Nature’s cycles come and go.
Yet there’s much more that we can know.

Vast marvels may await our gaze
beyond imagination’s ken
by polishing away the haze
to clear enlightened vision, then
shall fountains of deep wisdom flow…
There’s always more than we can know!

The Solstice Gods Mess With My Head by Neile Graham

I feel drunk–with what? Summer maybe. Perhaps
it’s the salmon light of sunset on the patch of far clouds

that hits me like a bolt of Lagavulin lightning, or it’s that
luminous blue after sunset fades that sinks me like some

fruity azure cordial, too sweet with such a bite, just before
the light drifts black. Even though it’s morning now,

the brief night’s effects linger. The world feels strangely
weighted to the left, or my body does. I can’t help but lurch,

left left left. And my head swims with those silvery little bullheads
that dart from your feet when you’re wading

in the woven light of the tide. My head so distant
from my feet but silver dashing everywhere. I round about

my summer chores. The raspberries drop into my hands,
but the black currants must be convinced to let go.

and so brief? How not to sleep when the night breathes
lavender velvet through the window? Days so unbalanced

they lie about the hour as long as long as they can,
longer than anyone should, stretched beyond reason

till I know there’s been a day full of more
than the usual hours, so full of the salty summer sky

I drink down hard until I believe these nights will grow longer
till they’re ever shorter again. That the earth spins just like me.

the crow and the cat by satnrose

The door to the backyard is open.
The cat saw a great big crow outside and ran after it.
The crow took off across the yard with the cat in pursuit.
The crow wheeled around and aimed at the cat.
And chased him back inside the house.

And now the cat is just sitting here pretending nothing happened.

editors note: We all pretend those crows didn’t make us cower. – mh clay

“Putting You Through Now, Caller.” (48) by Christopher Barnes

“What irrelevant caveman was that?
Lips displayed for smooches
Or a pug-face?
I hooked Sheeran onto my Vespa,
Rubbed the gatepost.
Cloud-nine in azure-orbit eyes.”

editors note: Would you reap relevance? Like what you lug. – mh clay

A child draws a picture with
blue skies and green fields
giant flowers and clouds like cotton candy
and in the corner, a sun,
its rays stretching out to cover the land
smiling face gazing benignly down, happy
to be bringing life to all in its
two-dimensional world.
In my tiny slice of hell the sun
is not like that.
If it was I wouldn’t hide in the summer
like a giant mole or
a resident of that underground city in
Australia.
My sun fools you, lulling you with
cool mornings, the clean scents of
desert sage and orange monkey flower
filling the air.
Quiet.
The whole neighborhood seeming to hold its collective breath
until, in that final moment,
Sol crawls over the San Jacintos,
magma fingers clutching the summit,
perching there, a slavering beast, before
it flips a switch and
turns the pavement into pools of melting tar
flames dancing a merry jig,
as it turns the whole into Gehenna.

editors note: Yeah, but it’s a dry heat. (We welcome Mike to our crazy congress of Contributing Poets with this submission. Read more of his madness on his new page – check it out.) – mh clay

No Biggie by Randall Rogers

The beginning of now
was not a big deal
yet upon its passing
it had no real demise
now continued
struggling
with then
so they put them
together with
“and”
now and then
that’s just the way it is.

editors note: “And” is ever enough for now… – mh clay

Contrary to popular belief, I’ve found.
Either Nothing or Everything is to be write for everyone,
Not that, as a group, generalizations have ever been believed,
But opinions can’t stop the “moving finger” writing.

Knowing all there’s to know about how young birds fly
We jump off the cliff, melt our wings and we die.
It’s just like creating what they’ll call fine art.
Bones drifting in water are beauty. A start.

DADA and the rest of Philosophy sit in the sweating house.
The latter might care while the former’s indifferent.
Which is exactly why DADA thrives in our souls.
Rejection can be what is first or last…or should be.

So, sit on the campfire and sing with us,
To see if your song is blowing out or in the wind.

editors note: Bob can sing it, like no other, But, who’s your DADA, who’s your mother? – mh clay

This week’s Need-a-Read comes to us from longtime Contributing Poet, Randall Rogers​!

Here’s what Short Story Editor, Tyler Malone​ has to say about Randall’s story, “The Alley“:

“Here we are live for a bit. When past life, there’s so much more to see. Or believe we can see. For the dead, those sights mean nothing. So find them in life.” 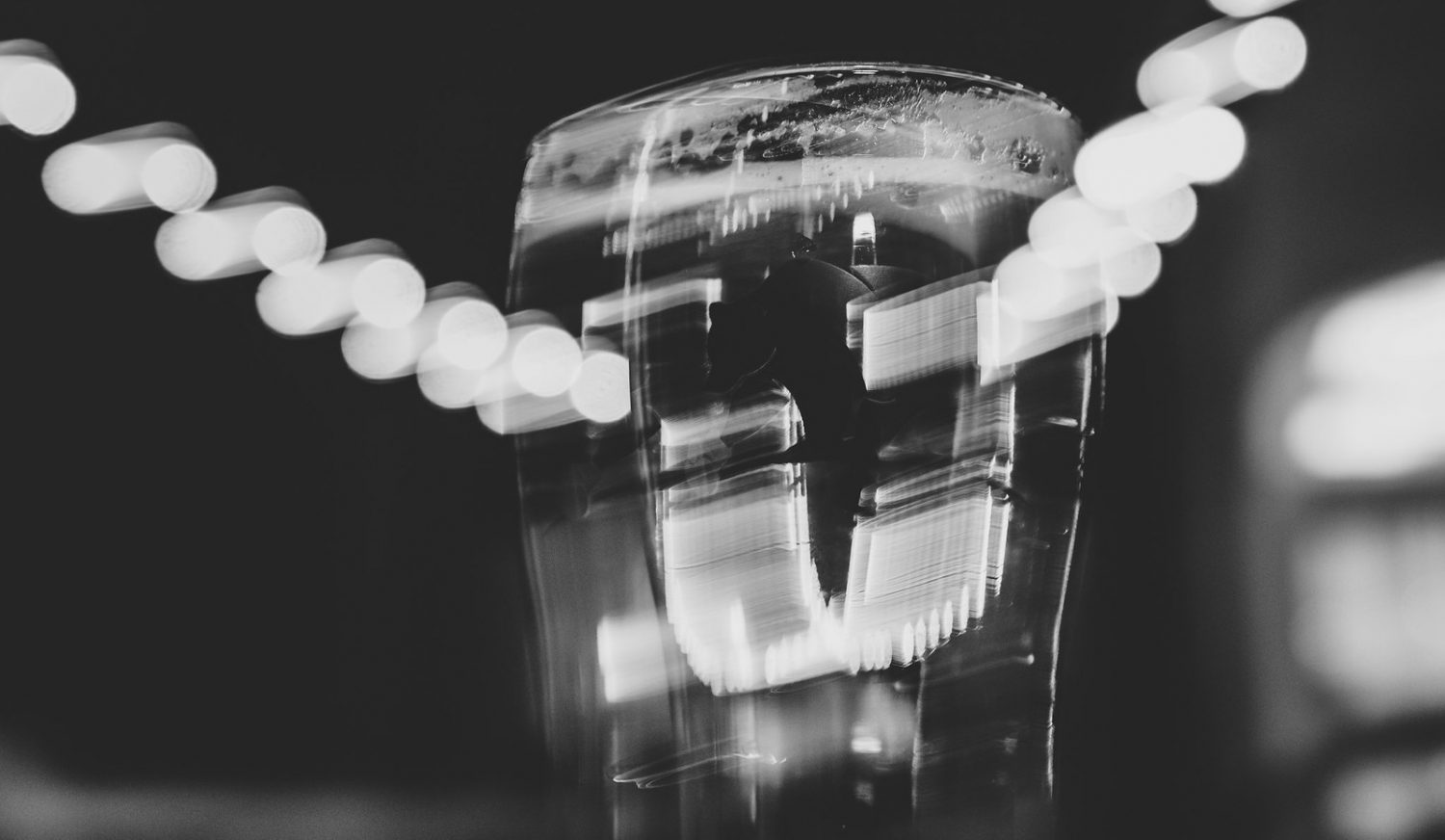 Seek & believe in what Tyler’s talkin’ ’bout by gettin’ your Randall read on right here! 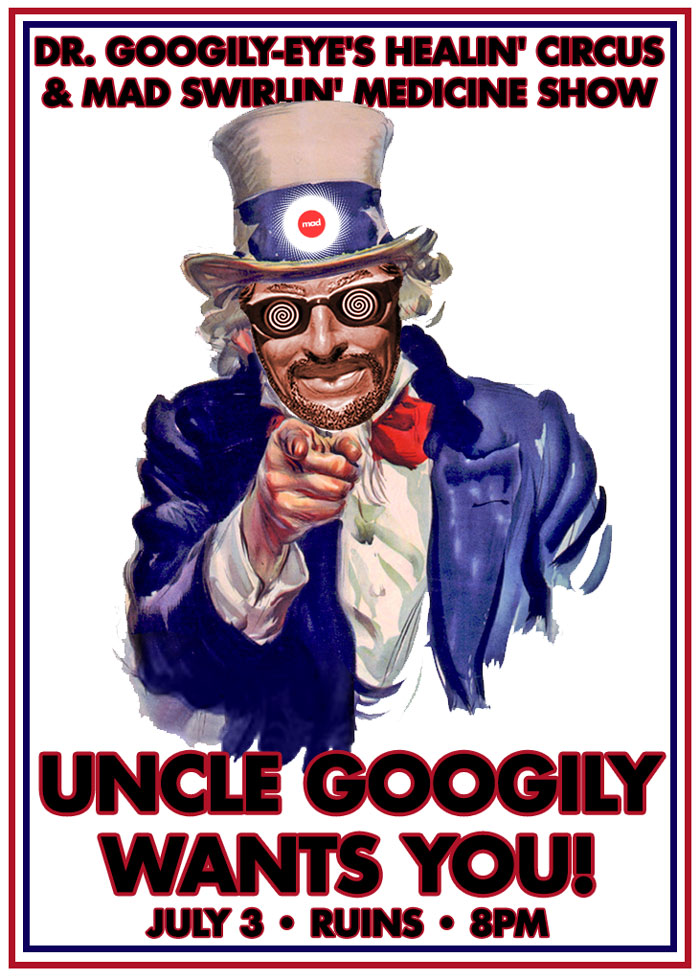 Yes! Uncle Googily Wants You! All you Poet-riots and Creative Conspirators, come celebrate a revolution, the birth of a nation of free expression!

“Yes!” prevails and “No” is vanquished when you stand up to be heard; your poem, your song, your self in all your Googily-Eyed Glory.

To start us off, Chris Curiel’s Swirve (with special guests Max Oepen on drums & Ed McMahon on guitar) will start us off with some Mad musical grooves. After that, join in & share in the Mad Swirl’n festivities.

P.S. To get a spot on our pre-list, all you gotta do is give us a “YES!” on our FB event page and check-in the night of!

Like most writers, I’m hard at work on various projects at once. We always have to be writing. But I’m going to go out on a limb here and say that Ryan Quinn Flanagan (RQF) is one of the hardest working poets I know. I’ll admit, we’re Facebook friends and I have made his acquaintance through the small literary press that has exploded on the scene. And as such, I see RQF’s near daily posts announcing new poems accepted and published in journals and magazines all over the world. 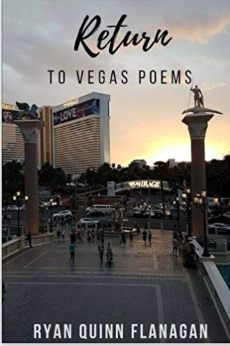 The guy is a poetry engine. It’s not like he’s just pumping out poetry bits. He writes interesting stories and conveys them in unique ways. RFQ is a street philosopher.

He writes about anything and everything. A dude with a ready pen. So, when I saw his book, Return To Vegas Poems, up for review, I knew I was in for a treat. And the independent literary press being what it is, I knew the publisher, too. Alien Buddha Press is daring and inventive, taking on unique and sometimes “out there” work. I should know, they’ve published two of my collections, Freud’s Haberdashery Habits and Hallucinating Huxley. The independent press is very incestuous; it’s like we’re all second cousins, or maybe just brothers and sisters. Ok, that’s a little weird, but possibly true.

To begin with, the title, Return to Vegas Poems, let me know straight-up that I was not going to need tea and crumpets to read this book. Maybe crack a beer. Or get the bong out.

Like The Odyssey, Return to Vegas Poems reads like a journey. At the outset, RFQ took me along on his pilgrimage to Vegas. Vegas, baby…