“An idea is salvation by imagination.” 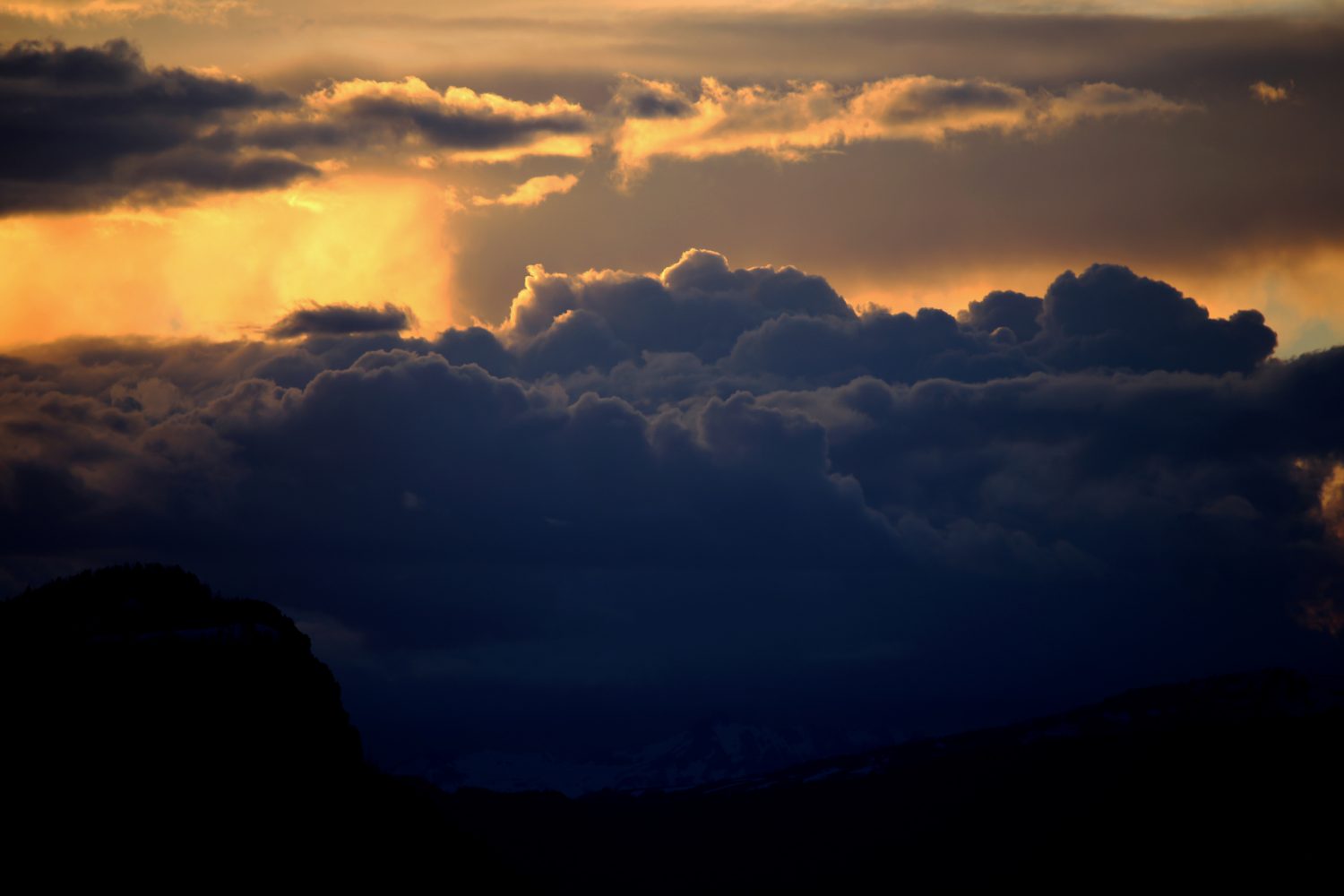 Fire in Her Heart ~ Fabrice Poussin

To see more of Fabrice’s poignantly poetic photos, as well as our other featured artists (45 total!), visit our Mad Gallery!

This last week on Mad Swirl’s Poetry Forum… we promise missed to raise a fist; we world knocked off when all clocked off; we refuge knew from ruined view; we light spun from sun, made a star of a star; we searched the harm in a love-worn garment; we cried sublime o’er too fast time; we self abused from measured muse. So much we matter from mundane chatter; our breath will give it life. ~ MH Clay

Breathing hard
love was unearthed
by her yard and its sweaty labor
and then layers of paint
built a textured vision
balanced but blooming
with such wild and beautiful weeds!

….compared as well
to those great poems of the centuries
which I read these days on my kindle
by lamplight.

…and this
is the joy
of my throat and my breath
and my life.

Passing As Life by Jeffrey Sinclair

There were days, hours, minutes,
Then just moments, to hold onto,
As our boy’s tired body set
It’s course upon death.

It was the only direction then,
As the mechanics of respiration,
Passing as life, lost interest,
Counting out their mere pretense of living.

Days before, he strode in from Kevin’s
So full of life, so full of anticipation,
Tomorrow Luke, Friday Tristan,
He greeted his mother and sister with that smile.

But his time here with us ran faster than we knew:
The ringing of the phone, the hospital, and all lost.

editors note: It’s so wrong, when their run times expire before ours… just… wrong. – mh clay

Invariably they were linked
Joined as par-for-the-course
woven to cover,
keep out cold:
…and then, the gaps grew –
more and more apparent –
these days that once
held together
now let too much through
What’s left?
What remains?
Not enough
Never enough.

editors note: A new coat, or warmer climes? How much do you like that coat? – mh clay

Here in this morning’s morning
self-forgotten sullen twang
comes a star gilded and silver,
climbing still like the pine
branches tipped with needle-
frantic green, yes, caught
like a tiny chip on the great
waist of some spectre surface
emerging into the dissolving dark.

A view with a poplar by Iulia Gherghei

The autumn colored the ruined city
The broken walls opened the view to some forsaken poplars
Barren of their leaves, tall in their sad dignity
They are scratching the high sky with their prayers

editors note: A snapshot; shelter or sanctuary. Fence for the faithful. – mh clay

I wouldn’t call it blue,
But this sun always tinges
a tad melodramatic
towards animals
sitting in matching cubicles
At dusk it spits dust
over their tarnished tweed jackets
They shake off,
like burnt timber,
the explosions of all the faces that
came near for a day,
all the evenings they pushed away
the epilogues,
end up with nothing but emptied checkbooks,
knowing they would gladly
call in that Band-aid friend

Instead we abandon the bridal aisle
with slippery eyes
Pieces of heart
left on corroded lips
play like dewdrops on sitar
Our bodies descending
from sweetness
into the pit of a great swallow
Isn’t it a tiny moon knocking on
skyscrapers?

Because home cannot save us,
Two strangers,
or lovers only through seven side looks
on a busy Monday,
wanting to haunt each other
from the hollows of turned doorknobs
of some ideal family
to the Armageddon
lying beyond
one imagined touch.

I pay the cab driver
and get off at the nearest
time zone to earth-
Narrow streets,
Poverty as graffiti on walls,
And nothing more to remind me
of proclaimed blue skies
but the caged smell of
another lost persona.

editors note: Imagining the end of the world in the end of a day. Enjoy your existential angst. Happy Monday! – mh clay

In pursuit of the common touch
They wanted to know
If I’d stake
My life on it.

What I’m most curious of – is,
Would they then raise
Defiant fists
If I didn’t.

Swivel that head of yours this way & get ready to get yo’ read on!

This Need-a-Read pick-of-the-week comes to us from Mad Swirl trifecta-ist Chuck Taylor.

Here’s what our Short Story Editor, Tyler Malone, has to say about Chuck’s story “Stiff Neck“:

“Revenge is a dish best served with a cold razor. “

And here’s a few lines to get you goin’: 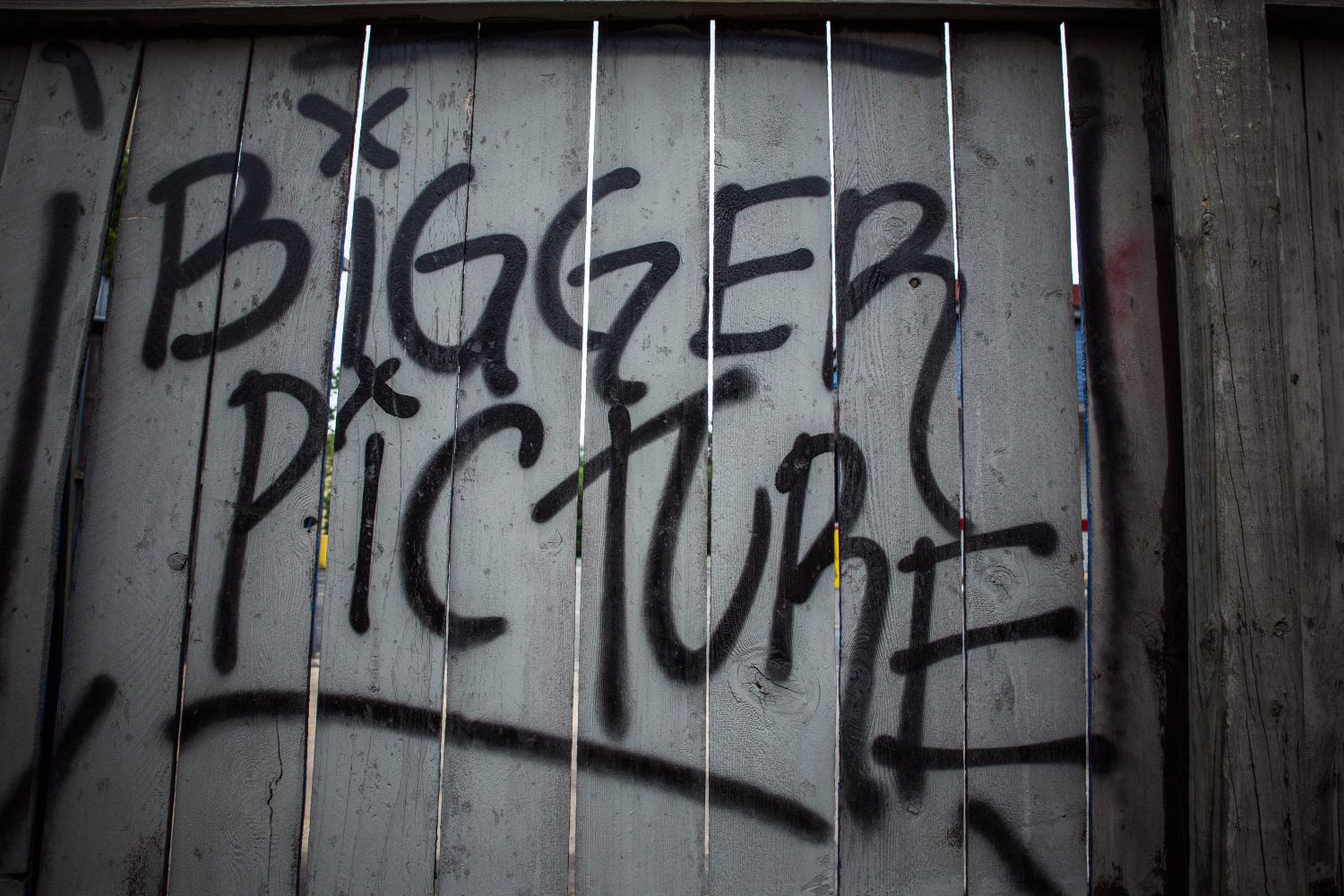 We kidnapped the barber with the stiff neck. I was against the plan but had only one vote. The rest of the guys were in awe of our friend from Princeton. He had a lot of family money in our small suburb. We called him Coney because his head seemed cone headed. His red hair and crew cut accentuated the look. At Princeton University, Coney was president of the Young Conservatives.

We waited until the stiff-necked barber was locking up his small shop near the train station and pulled to the curb and grabbed him in the dark. His barber’s name was Kyle but we never called him that. We were acting tough that day like Mafia hit men…

Get the whole gist of this twist of a tale right here! 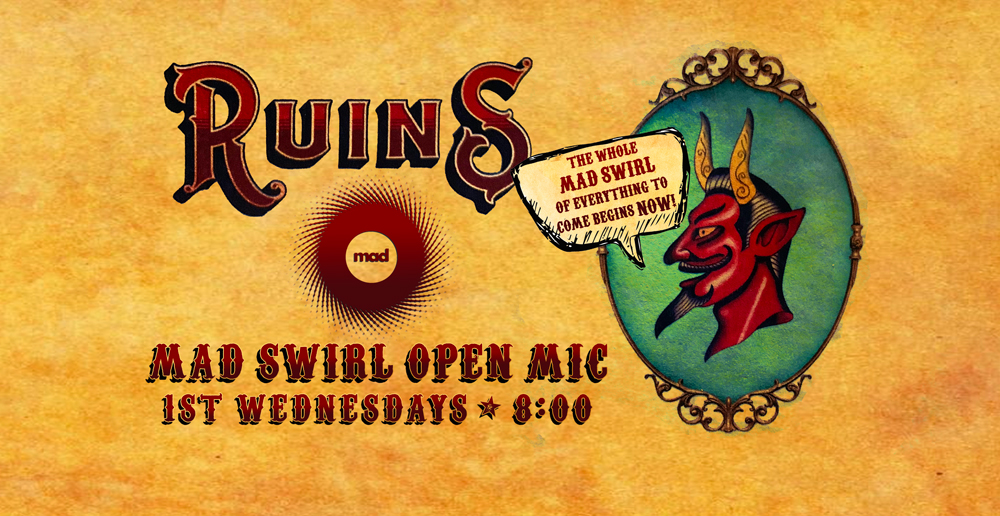 This past 1st Wednesday of June (aka 06.05.19) Mad Swirl whirled up our open mic madness at our NEW HOME, Ruins! As soon as we arrived, we knew that we found us a mighty fine new home. Thanks to Ruins for so openly opening their arms to us Mad ones! We are honored to call them our open mic home.

HUGE GRATS to all you mad poets, performers, artists and musicians who helped swirl us up some mighty madness!

And lastly, but never leastly, thanks to ALL WHO CAME to support the launch of our creative collaborative love-child & share in this loving, laughing, lasting night of poetry and music! 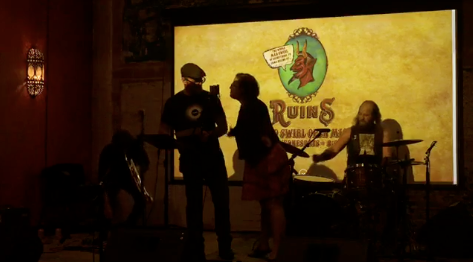