“Some things have to be believed to be seen.” 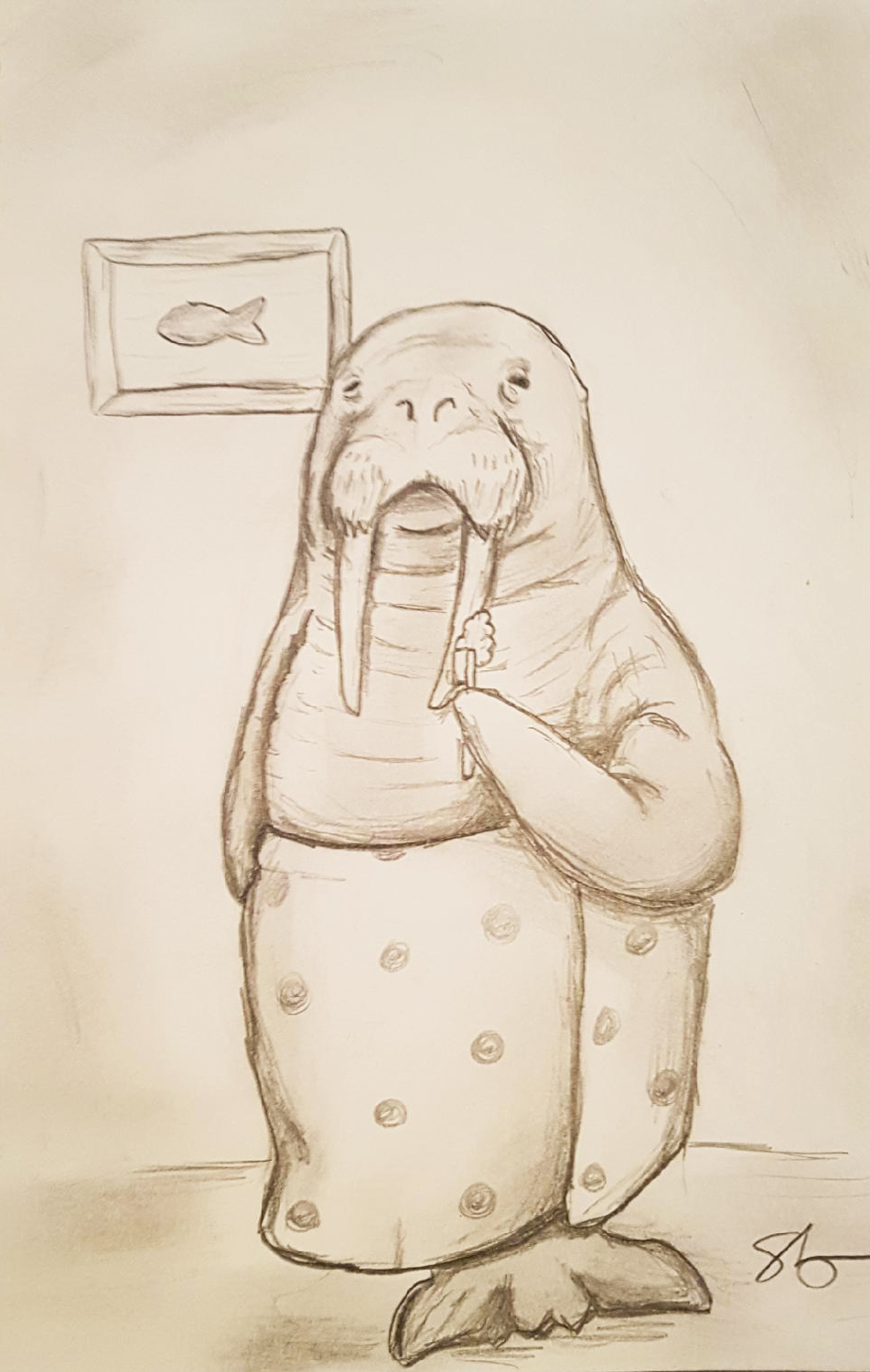 This last week on Mad Swirl’s Poetry Forum… we found a bunny bong way to start a sobering day; we exposed the connivance of a torture contrivance; we splashed in the spew of a real world view; we heeded the call for a sideways fall; we reminisced in smokers bliss; we questioned if it’s craven to seek for safe haven; we found nothing to say that is not a cliche. It’s all right, Mom; we do anyway. ~ MH Clay

Hi Mom,
it’s been a while since we talked.
When was it? Yesterday?
So, I wrote a poem about that time
in the hospital when…
You know, when you told me,
“Don’t cry — all moms die”,
remember?
I sent the poem to a journal.
Guess what the editor said —
that it’s a cliche and cliches don’t sell,
and to accept his condolences if it’s true.
Well, who knew…
Don’t worry, Mom, all is well.
Let him take his condolences and his pay to hell.
I forgot — in America people don’t die.
They rest in peace or at least pass away,
straight to heaven, of course —
it’s polite, it’s what you’re supposed to say.
Dying is awfully rude — it’s an unspoken taboo,
a cliche everybody pretends
they would never go through.
By the way, ”through” at the end is another no-no,
although some say it’s a myth, even Pinker says so.
But as I’m not a native, my preposition at the end
would be considered nothing but an ignorant trend.
Never mind, Mom, I digress.
What? No, I don’t stress.
Yes, of course, everybody’s well.
The kids? Doing great.
Says who? When did I yell?
Ah, you heard me. It was nothing at all.
Just a little argument over a stupid show.
Yes, you’re right. I’ll do my best.
To be patient like you? That’s a good laugh.
No, nothing, Mom. Sure, I’ll give them love.
We all miss you.
The pain is not getting less.
I did it again — sorry, I always digress.
So long, Mom. We’ll talk again soon.
We both know you’re not in heaven
but in your grave with Dad.
Right, you’re both dead,
and yet you’re always with me.
Another cliche…
Oh well, I’ve got so many,
you see.

editors note: From “as a newborn babe” to “as a doornail,” it’s all cliche. (We welcome Irena back to our crazy conclave of Contributing Poets with this submission. Read more of her madness on her page – check it out.) – mh clay

She wanted a little room for thinking,
another for sleeping with strangers
she’d meet in out-of-the-way bars.

colleagues waiting to escape to ski slopes.
She needed a room for stitching desire
into slinky black dresses, another

for dinner meals taken alone in dim light.
A cage for her anger, a den for self-pity,
and a large cavern to hold the echoes of her dreams.

editors note: Be it shelter or shell, we just can’t do naked. – mh clay

Write Back Soon by Scott Wordsman

When my physician,
out of professional
interest, asks me
if I smoke, I tell him
no, then let it sit, think
of that rainless May,
my last in grad school,
when I’d come home,
smoke two Parliaments
down to the bone, ear-
buds in, listening to
that one Superchunk
B-side, a song
off an A-side,
which in 1994
got little play anyway.
In 1994 my brother
was born. When he
visits me in Jersey
City, I want him to
show up with more
than a shrug. They’re
tossing grandpa
into assisted living,
he says. You never
call dad. There are
three or four marbles
stuck in my throat
when I ask Eric if he
smokes; he doesn’t, I
know, but I know he’ll
cut one with me
if I ask him nicely.
Outside, every summer
cloud is loud with this
cancerous din I hear
loudest when my car-
cinogenic head fills
like a gas tank with
all my vices, alive
and latent. I’d like,
for once, an an-
swer or two, some-
thing like a tattoo
I could remove
or a mind
that isn’t mine.

editors note: It all burns down to ash, anyway; no mind at all. – mh clay

Reports of darkness
Remind us of the darkness in ourselves
And we fall like dominos.
It is just so hard to stand
When everything around you
Is pushing you down.
Do not fall neatly into line
Dragging down those behind you.
Don’t get me wrong,
I understand. But
If you can,
Stand.

editors note: No telling what you can’t stand, until you stand (in, against, for) it a while. – mh clay

With the Dogs Of War hot upon my demented heels,
Fire and Brimstone raging through my veins.
“Two Wrongs Do Not Make A Right”
parroted Hope and Charity to Vengeance…
who stood slouching at the bar, cackling,
and waving a wanking-hand in their direction.
As I hammer down coffin nails
into the face of modern poetry…
Springtime Butterflies and Birds Of Peace
become carrion for the exiled Ravens
from the asylum watchtower to feast upon.
A psychiatrist scribbles a signature
under the patient’s case notes,
takes a mid-afternoon Prozac
and quietly unravels in-between appointments.
This is the REAL fucking world, sunshine…
where policemen don’t save people,
they beat them to death.
Sinking women make themselves widows.
People are not scared of spiders,
nightmares and bogeymen anymore,
but, of their very own friends and family.
Sadists sit protected behind bulletproof glass
at the far end of ever growing Welfare queues.
Soup-Runs are accused of encouraging rough sleepers…
and some bright spark invented The Homeless Spike.
Gun crime in Mainland Britain
is rising almost as fast as obesity…
‘I want a revolver and alcohol for Christmas, Santa,
it’s what every other kid in my school is having.’
I saw a middle-aged man, with no legs, in a wheelchair
at the Citizens Advice Bureau, crying like a baby,
because ATOS had just declared him fit for work
“You Can Get A Job Answering Phones”
This world isn’t just going down the pan,
it has been in the fucking thing for decades…
we’re all just stewing in the rot and stench.
‘God Is Dead’ claimed Nietzsche,
aye, and if the Devil existed he’d be unemployed too…
both of them are not needed in the mix.
It’s human fucking beings doing this to each other,
time and time again…
we’re the only animal on this planet
who robs, murders and destroys…
for many dark and twisted reasons
and not a single one of them is to simply just Survive.

editors note: The rant is the same, both sides of the pond. Listen and choose; despondent, defiant. (I choose the latter.) – mh clay

The Suicidal Decadencies 1 by Walter Ruhlmann

while the factories
regurgitate the torture
contrivances
and the infernal
machines.

Ironic, Ain’t It? by Jason Ryberg

that,
while constantly
being re-reminded
by the representatives
of forces
(presumably)

pre-ordained and inescapable)
holding place
in whatever
grand (or even less than
grand) schemata of peoples /
places / things
you happen to currently find yourself
steeped in,
is indeed sobering; it also,
(maybe not-so) oddly enough,
in turn, makes the notion

of pulling several monster
rippers
off a bong
made from an adorably
google-eyed
ceramic bunny and
sipping on a quadruple
Americano
while flipping
back and forth between
a (sur)reality show about
Amish gangsters and
bat-shit religious programming
on the local access channel,
sound like just as good
a way as any
to start
the day.

If you Need-a-Read, this one from Contributing Writer and Poet, Carl Kavadlo just might stick!

Here’s what guest Short Story Editor, Mike Fiorito, has to say about this pick of the week:

We’re all one breath away from being someone very different.

Here’s a few lines from Carl’s dark tale “NUMB“ to get your blood flowin’:

George Tango sat on the L train, on the gray, hard seat. He spotted a Liz Smith gossip column headline in an open News, spread wide by a middle-aged man in a slightly weird, off-green Hamburg hat.

George got off the train dulled by the headline of Liz Smith, dulled by the weather, dulled by life. He walked one-half block on Graham Avenue, then followed two Italian-looking, 16 year old girls, with long, jet black hair, pierced, diamond stud ears, and tight jeans into the Internet Café at Graham and Devoe. He had walked two blocks south, exiting at Graham Avenue, the 17th stop from his Rock Park station. He followed them three steps down for no reason, although he vaguely thought he might sit at a table

George moved towards his real destination. George taught a class of English speakers two days a week, Monday and Wednesday. The class ran 4 to 6 p.m. His assignment was at Leonard and Grand, six blocks from the L at Graham. In there, he fooled them always with his civilized manner.

‘Let’s go! Tell me what you had for breakfast.’

‘Today I had pancakes.’

‘Today I had toast.’

Twenty-three people of different nationalities and cultures spoke in a nicely-decorated room. Pakistani, Polish, Dominican…everybody told what they ate. They went around the room, round-robin. They did the same routine for the lunch meal; then stated the names of children, pets.

They did this same routine with variation, two days a week, two hours. Everybody practiced talking English. That’s how you learned it. That’s how you taught it. Today was Wednesday.

George decided he was going to kill someone. The thought was as clear as ice. Taking the L train back to Canarsie, George Tango felt calm. The thought arose as George descended the thick, fat, gray stairs. It floated into his brain at first. Just floated…

There’s no way you can stop the flow now. Get the rest of this gory story right here! 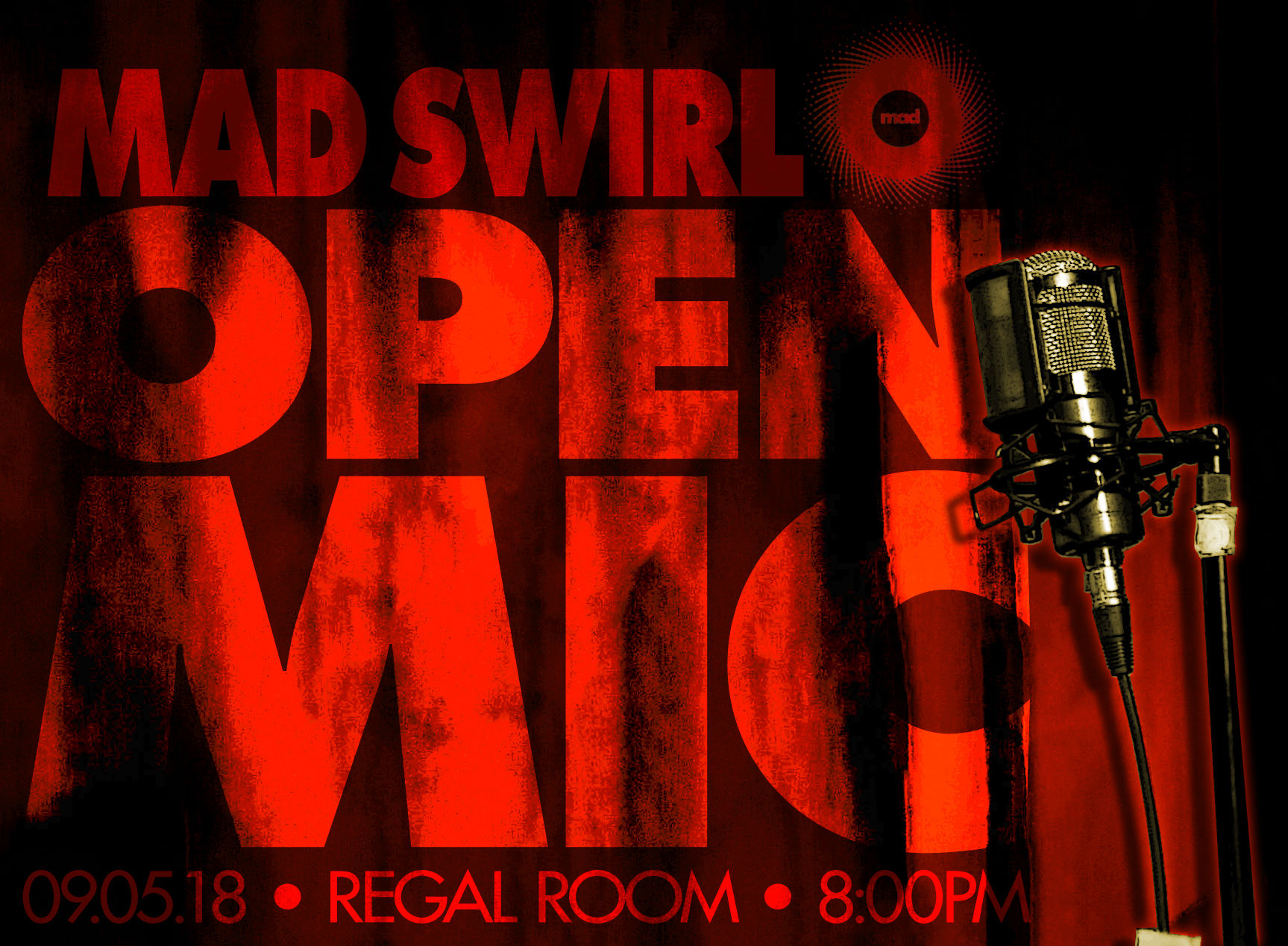 This past 1st Wednesday of September (aka 09.05.18) Mad Swirl continued to whirl up our mic madness at our NEW mad mic-ness home, Dallas’ Regal Room (at the Independent Bar & Kitchen)!

HUGE GRATS to all you mad poets, performers, artists and musicians who helped swirl us up a mighty fine night! 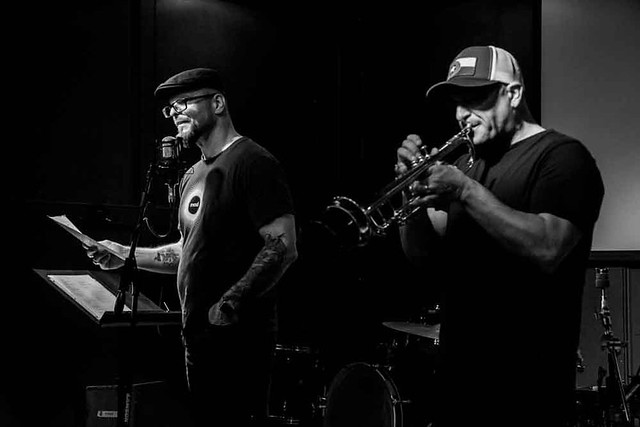 (click to start the slideshow : photos courtesy of Dan “the MAN!” Rodriguez)

GREAT BIG YES to Swirve’s Chris & Tamitha Curiel and their special guest Max Oepen, for stirring the Swirl the best way in the world!

HUGEST grats to our Patron Saint of we Mad Ones & proprietor of the Independent, Josh Florence!

And lastly, but never leastly, yes Yes YES to all who came out to the Regal Room & shared this loving, laughing, lasting night of poetry and music with us! 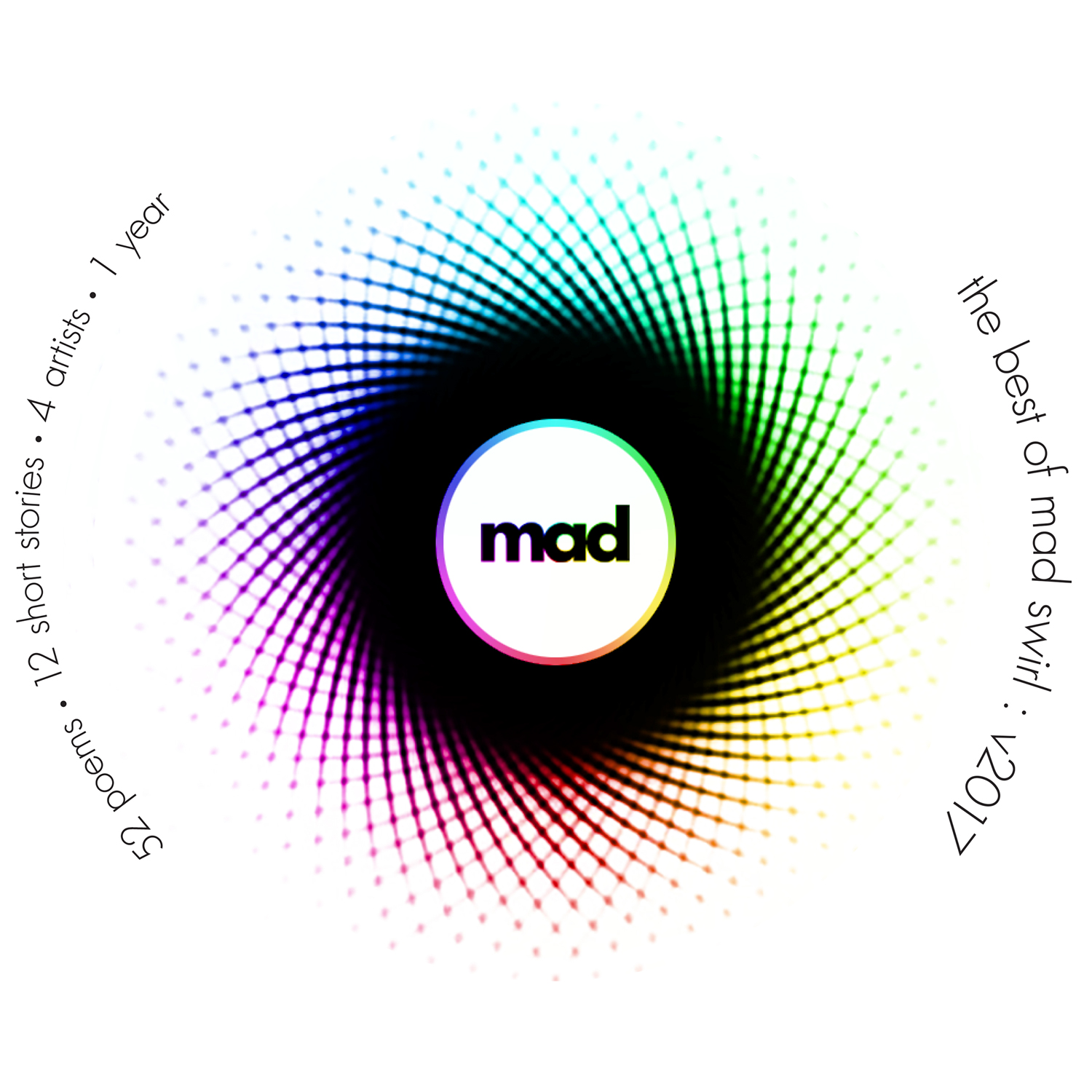