“The dignity of the artist lies in his duty of keeping awake the sense of wonder in the world.” 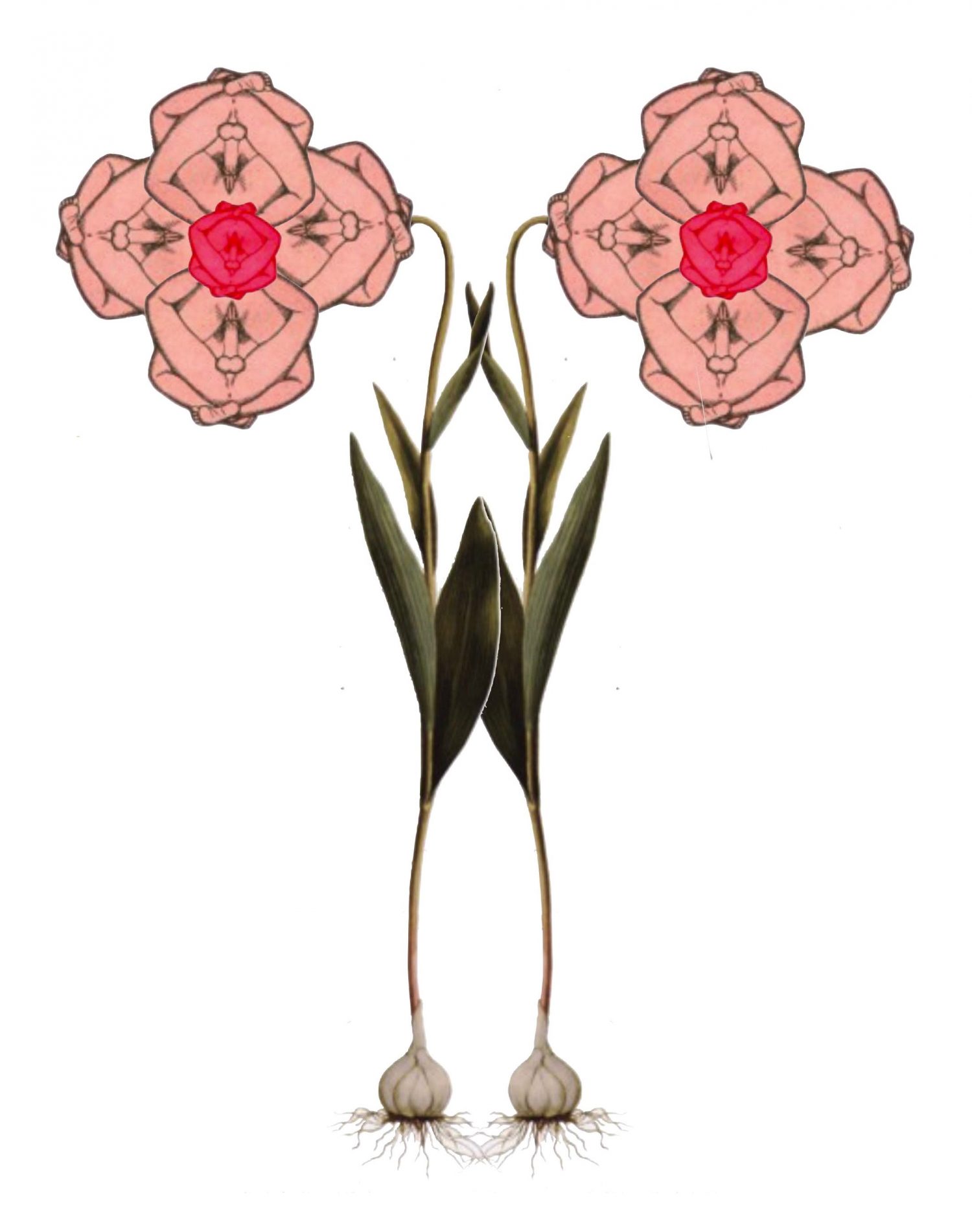 “The Exchange of Secrets” (above) by featured artist Bill Wolak

To see more of our other featured artists, visit our Mad Gallery!

This last week on Mad Swirl’s Poetry Forum… we sought sub-eighties with ukulele ladies; we got the drop on a pronoun swap; we questioned our dust, seems turning to rust; we watched lights in sky wink out, but not die; we turned abrupt displacement into seamless, fast replacement; we saw a glimpse of done tease an impatient one; we took a stand for promise over promised land. What we decide describes the ride; out loud and proud. ~ MH Clay

In an instant, he dragged Linda to the basement with high hopes to find himself. The camera on the floor surrounded by inscrutable instruments covered in blood. A slow clock sat ticking as she clutched her locket to her chest. The score settled on small tragedies of sisterhood and the lost trance of what could but wouldn’t happen. There is no liberty for us in the implemented order of you. A threat manifest on the toppled staircase of regret. Enshrined far from comfort scratching at her bleeding wound. The warning bell rings in the sky-lit green. She sighs resigning as he tightens the chains unleashing all of his pitiful exhibitionist tendencies.

He said, “Wait. Don’t move, you’re mine” and took another drink around the corner where the particles of dust kicked up from the floorboards. With control, the warning bell tolls on the hour, expressing faith in a promise land where no one has been before. The sound chases after wishful thinking and moments of imagined freedom. This began with a narrative and devolved into disorder. She exhaled lament in pacified agreement while her healthy disguise crawled out of harmony into the belly of the old frontier. There was always subtle wonder within the destruction of mysterious darkness. Action poised with friction, a calm manipulation of everything. Time rolled out flat and the more she moved, the more it pulled her down. Her quiet cry to go home muffled like music in a padded room.

editors note: Faith in a land of promise brings more hope than faith in someone else’s promised land. Cry out! – mh clay

The Man Who Hates to Wait by Gregg Dotoli

editors note: It’s all gotta happen right damn now, so we can relax and slow down later. – mh clay

they pulled the monster out from under the wreck

he was part of the requisitions team

arriving at the office he signed in at exactly 8:15am
exactly every day

the cars along the riverbank refused to be turned away

each tree stood firm
buried up to their waists in sand

muttering to itself the beast fell apart &
into the future

with his last breath the monster grew skyscrapers from its eye

HR made a solemn vow

editors note: On an individual rampage for relevance; be sure to submit those requisition forms early and on line. – mh clay

Too much sleep to believe fireworks come twice a year.
Wish for the darkest night of human life tonight
through blinks, light bleeds as nettles dig
in flip flop heels before taking thorns home.

Best not believe in heat, it’s here for us all,
fire for those below waiting on explosions to chase
shade under seats to the suffering of sticker arms,
rattlesnake seeds, hot dog bites spit from bit lips.

Believe fireworks can do anything but fall
as we will
never glance down, never see where we are.

Rarely do our explosions die alone
as we do
not whisper if this is summer’s funeral.

editors note: When year after year becomes year-after-year, we struggle to make meaning from the melee. What do we mean, anyway? – mh clay

We are star stuff which has taken its destiny into its own hands. – Carl Sagan, Cosmos

Remains of stars adorn the sky
with nebulae aglow on high
in stunning patterns that romance
the wondering stargazer’s glance
or simply senses mystify.

While stellar orbs are born and die,
do heavens strum a lullaby
as all around the cosmos dance
remains of stars?

Might there be heard celestial sigh
when Man seems deaf to wisdom’s cry
and Mother Nature looks askance?
Will humans waken from their trance?
For in our earthly beings lie
remains of stars.

I dropped the /, borrowed the you.
The / was loud, straight-forward.
Its thinness, its lack of depth put me off.
I felt dizzy, I feared its height,
besides I can curl up inside the you,
sit on its y, burrow through its o, curl up on its u.

I dropped an eye inside my head,
the mess scared me, I must confess.
I didn’t recognize the / I was before,
it must have been changed into that other self
I wrote about on other shores,
when he showed up six years ago.

Pardon my didacticism, my prosaicness.
I have never claimed to be full of prowess.
You may be better at words craft
you will become my dead drop, my new hide,
like a snake sheds its skin, I swap pronouns.
/ drops the ball, you takes it all.

editors note: Don’t mean to be an /, but YOU have something here. – mh clay

hula girls, forty some odd they
test their ukuleles as you will yourself to
drive to the state park.
it is six in the morning;
late enough in the year for the sun to
wink in your rearview from the direction of the water, you are here to
pursue the greatest plains
the great in plain
you’re not alone.
dance on? they may, and their hips will
seesaw to and fro
their untuned ukuleles reimagined as the restless
hum inside your radio;
a fly does yoga, dead in your cupholder
while six different chain restaurants
beg for lucky seven
and the dives?
they stand solid
upon the silo signs,
along the 309
in the place where cedar fills your eyes
and the weather stays
(more or less)
your parent’s perfect sixty-five.

Old age claims us all, but what it does to us is different.

Here’s a gentle push to get you goin’: 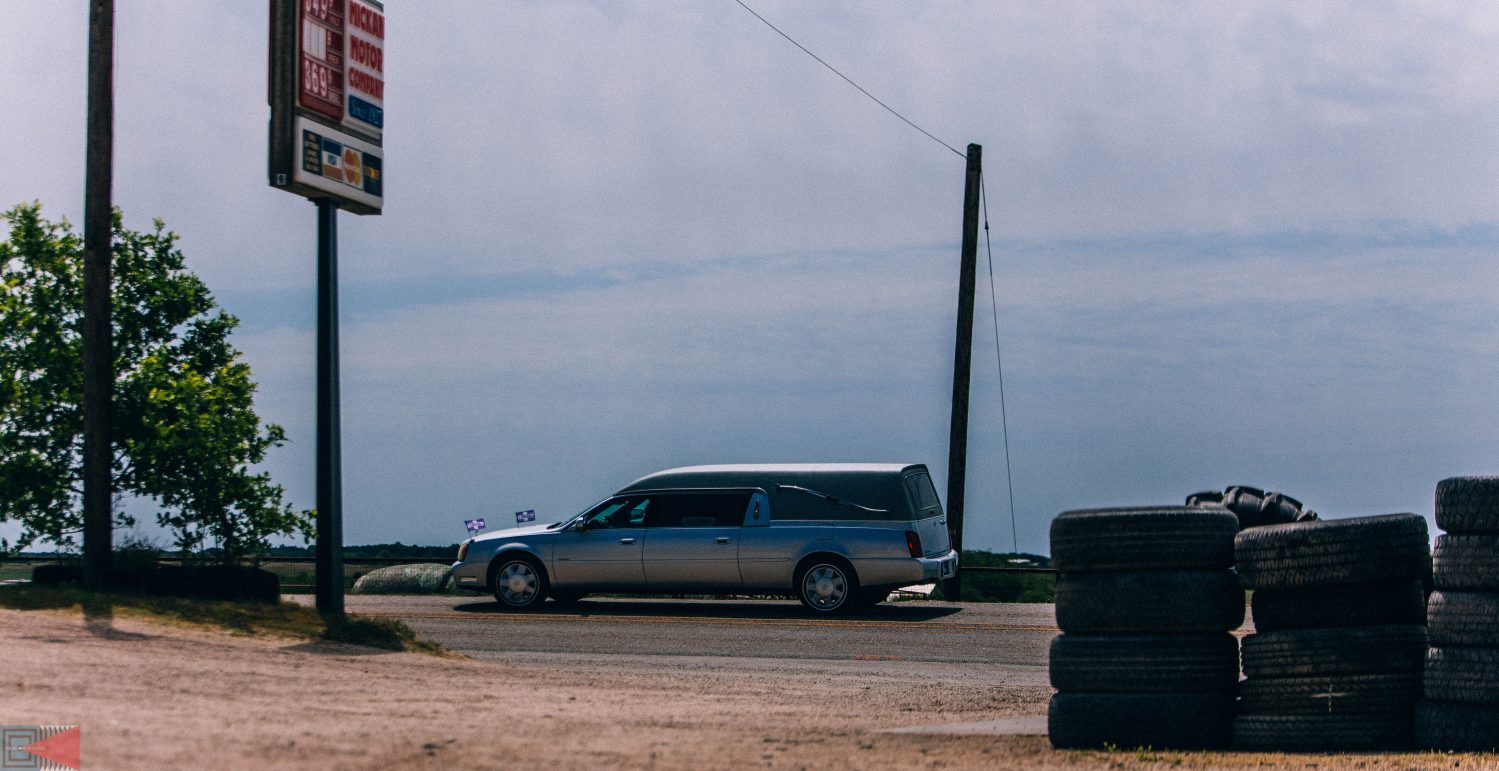 (photo “Last Ride” by Tyler Malone aka The Second Shooter)

“I wish I could say things are better,” wrote Charlie Anderson, about his wife Callie, “but they’re worse.” The experimental drug for her early onset Alzheimer’s had not worked. “Now it’s like I have no wife. She can’t speak and has a blank look on her face like a dead fish.”

I was on his email mailing list and felt awful. I knew them quite well, knew Callie when she was a jogger and would race breathlessly by my house. Their house in Bucks County, Pennsylvania, was beautiful. I’m honored to say I was a regular visitor although I only knew her for two years.

Such pleasure I got when I fast-walked to their house. A small statue of the Virgin Mary was in the front yard, along with a splashing fountain. The back yard was filled with trees. Ever seen a lavender wisteria tree? Its branches slope down like an umbrella and the aroma is heavenly.

The Anderson family did indeed believe in God and Jesus Christ. Their saving grace, I thought. I hadn’t made up my mind about the Afterlife, and I had no intention on finding out, even though I am Callie’s age, sixty-five.

Even though Charlie was her guardian angel here on earth, he had his flaws. Severe ones. Even my own husband, Jerry, noticed them when we visited. When Callie was well, he “corrected” her and told her what to do.

“Callie, dear,” he would say, “have you gone on your stationary bike today?” Or, “I’m glad you’re reading The Last Temptation of Christ, but the author’s name is Kazantzakis, not Kazanjian, which is an Armenian name.”

Jerry and I thought he was a downright bully. Jerry refused to visit anymore and I couldn’t blame him. My mission when I visited was to protect Callie from her husband.

The next letter told us he had put Callie in a home. “All My Darlings,” it was called. Darlings! You can shoot me before you put me in a home…

We know you want to fall head first into the rest of this tale. Get the whole story right here! 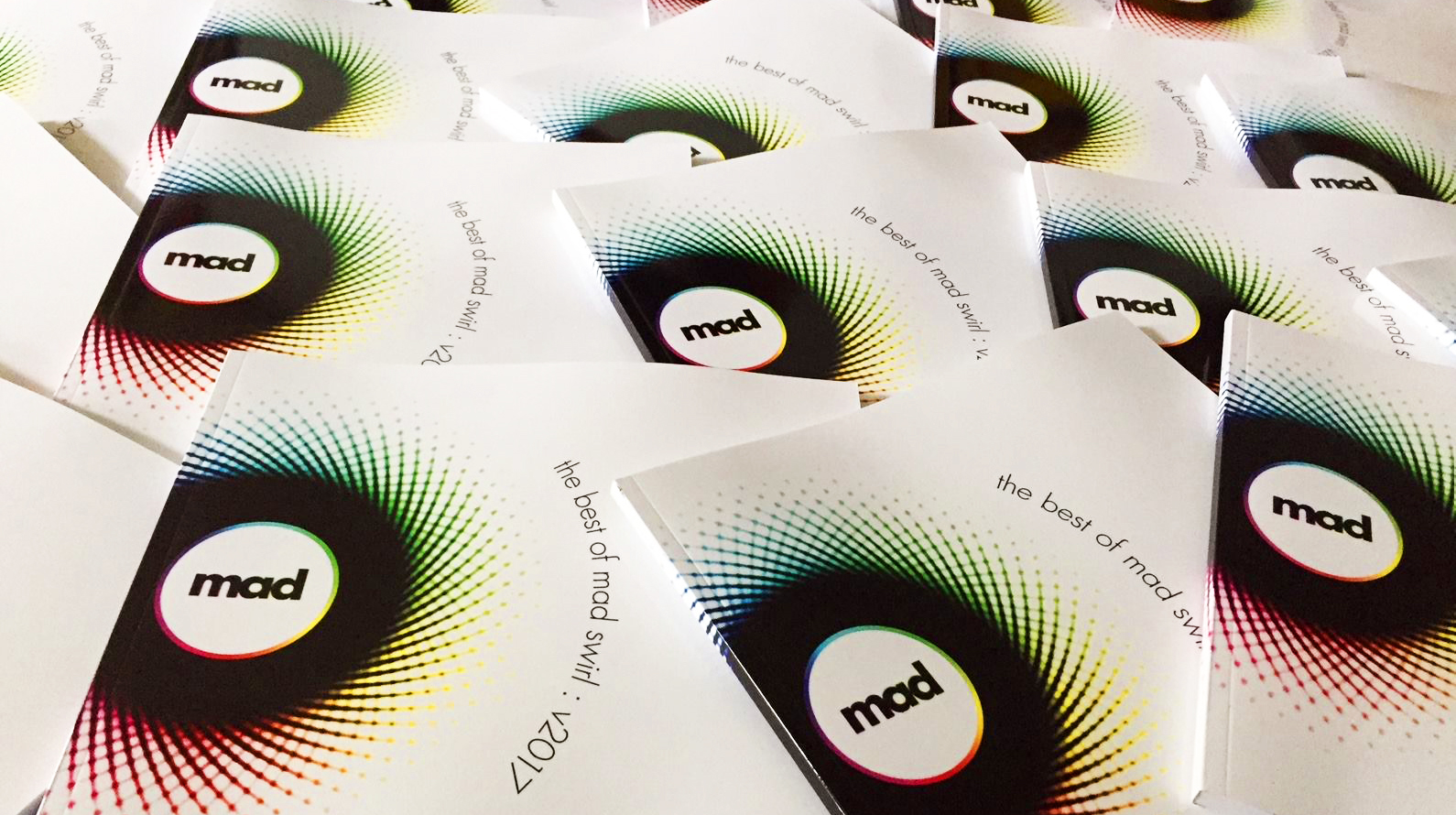 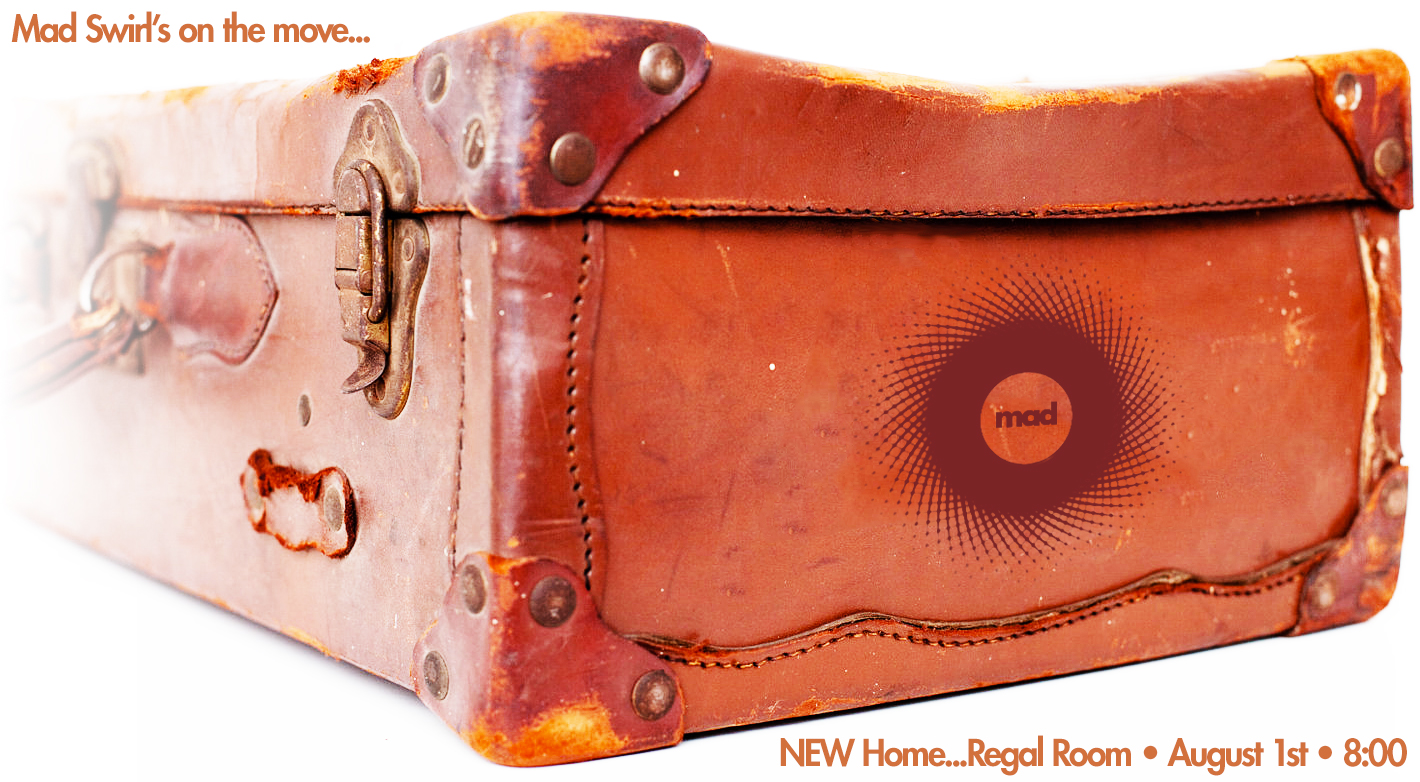 JUST IN CASE YOU MISSED THE MAD MEMO:

Starting August 1st, Mad Swirl’s new home will be at the Regal Room in Deep Ellum! We sure are gonna miss our former home, City Tavern. ‘Twas a good two year run there but due to space limitations with their new location, we gots’ta hit the road! Sooo…

This month, besides breaking in the new digs, we will be showcasing the local and worldwide works from our “Best of Mad Swirl : v2017” Anthology!

Come on out, one & all… share in the Mad Swirl’n festivities, & if the spirit is movin’ ya get yourself a spot on our list.

For you ‘bookers out there, stay tuned to Mad Swirl’s Facebook page for the invite to pop-up!