“Whether you listen to a piece of music, or a poem, or look at a picture or a jug, or a piece of sculpture, what matters about it is not what it has in common with others of its kind, but what is singularly its own.”
Basil Bunting 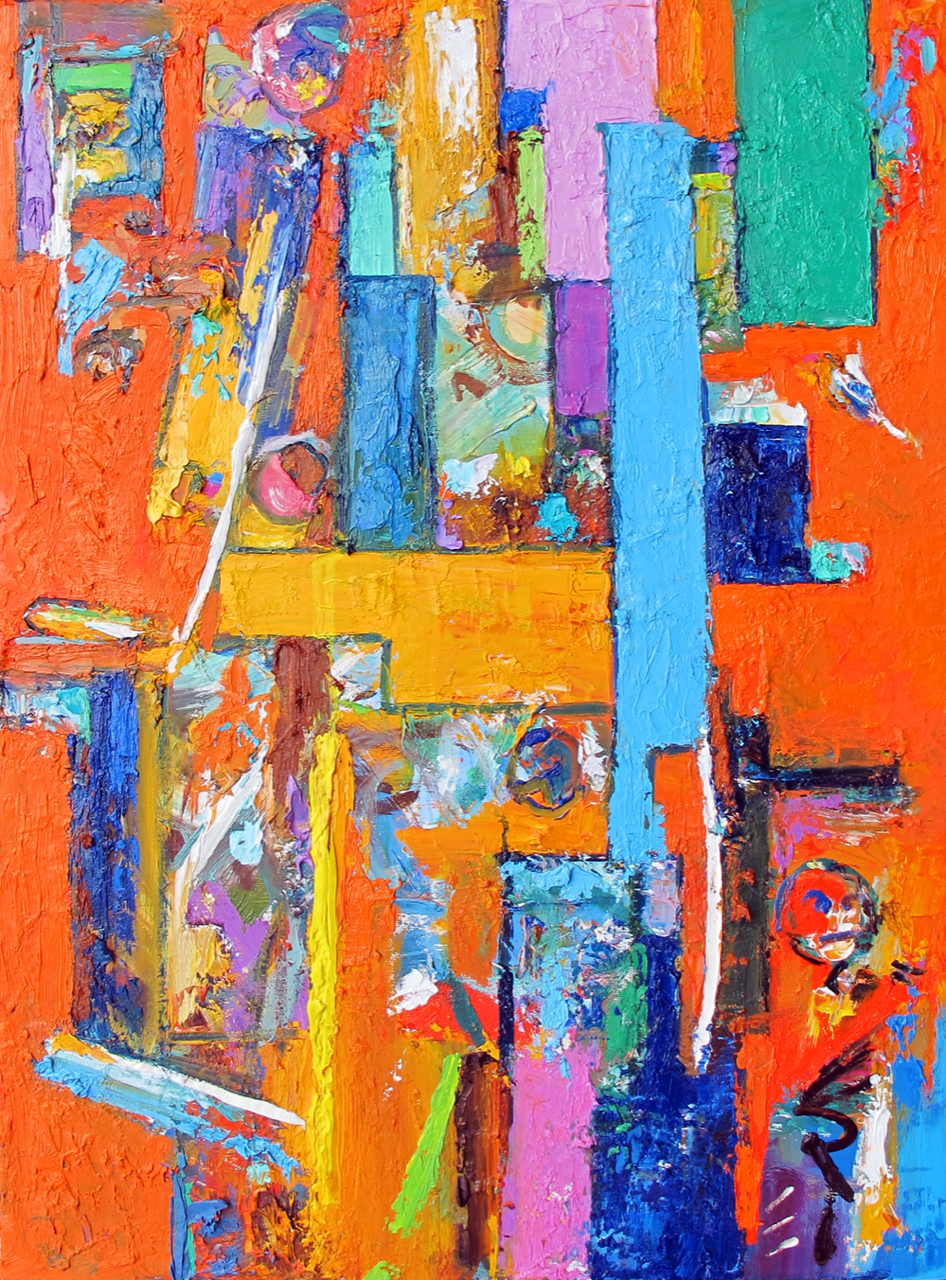 This last week on Mad Swirl’s Poetry Forum… we made new names in a calendar game; we lamented sadly over breaking badly; we stumbled, sure, into insomniac cure; we drove a driftwood car like a fallen star; we saw another star stop over a king of Korean pop; we found comport with no support; we learned how it feels when trouble’s at the wheel. With every turn the words will burn; there’s freedom in the fire. ~ MH Clay

“There’s Just No Support!” Yelled The Bloke From Up Top Of The Scaffolding by Paul Tristram

There is waiting tragedy birthed
in the tenderest of kisses.
Some folk love war and vice versa.
STOP signs make my amble turn to rush.
Fidgeting works the same, physically,
in both ‘Fight’ or ‘Flee’ scenarios.
She ripped down the drapes
one sunny Winter’s afternoon
and screamed hysterically
“I’m Suffocating!”
no one even stopped to ponder.
They don’t seek to destroy uncultivated land…
you can use this to your advantage.
‘Obnoxious’ is a Label not a Trait…
if you insist upon gaining the attention
of someone who doesn’t give a fuck for you…
then I see only one arsehole there.
Don’t juggle anything you won’t miss,
catch, or which cannot be replaced.
She’s cold again… it’ll keep her safe awhile.
He dipped the till, got caught, then complained?
I have only one ‘Hangover’ left to cash in this week,
and I am yet to disturb or ruin anything.
‘Time’ isn’t money, it’s a loss,
each second ticking away
and drifting behind you into memory…
make ‘em count, and matter… or don’t.
I was ‘Born To Raise Hell’
but lost my footing along the way,
and ended up for awhile on a chain gang,
scribbling down sonnets and spells,
instead of smashing my raging fists
into the face of each new day.

Daikon Billy wuz talented too
but he wuz moa contemporary
so much so
dat he just had to check out
da nightclub club scene in Waikiki.

In Wonju
he had wun big following
and now
he wuz going unleash his flashy routine
on da Hawaiian neon wonderland.

Wen he wen do wun guest gig
at wun popular club
on Kalakaua Avenue
he got da dance floor cranking.

She turned out to be
wun local Japanee girl called Mona
and she wuz da one
dat wen give him his new stage name.

editors note: Makin’ the big time in his own space-time. – mh clay

After a photograph by Northscapes Photography, Presque Isle, ME

The driftwood is a hand grasping something
then letting it go. Stars scatter above
as if this hand, not God’s,

had tossed them into the morning sky.
Up there, they grow brighter. They will
fade once lemon sunrise washes away night.

Yet there is light now. Stars band
together into the Milky Way. Clouds form
like clusters of maple leaves clinging to water.

The water is itself. It reflects nothing.
It rests beneath the sky, awaiting sunrise
and its long day as a sparkling mirror.

It contains everything: cans, rocks, hornpout, weeds.
Before dawn its splash on the shore
is quieter. No birds break its surface.

Across the lake, someone’s car rounds the curve
from the next town nearer to sunrise.
Its light is a fallen star. Soon others will follow.

At last! A cure for optimism! by Michael Corrigan

Fifth Dan status in the art of unsleeping achieved,
a school of dead leaves chase each other around the garden
while a three-quarters moon rises like the death star.
These, the night lives of heroic, adventurous, self-deluders,
this, the nocturnal dreamscape of late middle-aged Indiana Jones’
pot bellied Bonds’ still queasy from that dry martini, shaken not stirred,
or was it the kebab that took the wind out of your sails and ruffled the duvet fiercely?
The theatre of other-self, beginning to feel like an emotional lock-in
for sadists, psychopaths and drinkers of mammies milk.
Could’ve been a contender, could’ve been an accountant,
a Hun, a Vandal, a Visi-Goth, a Cossack, an Engineer, an En-tre-pren-eur,
a smiler who waits with a blade up his sleeve, for those he believes to be less,
or any other symptom of a good school and nuclear self-regard.
But the file and rasp of early shaping, the ruin and render, roil and moil,
of all things planned and unplanned, taken and undertaken,
leads to a blackbelt in sleep deprivation and the happy knowledge
that finally and at last there is a cure for optimism.

editors note: A prod for the downtrod(den). – mh clay

A Promise To Break by Elizeya Quate

What I’m
asking is
for you
to break
me AGAIN,
break me
all the way OPEN.

(I don’t care
if it hurts)
as long as
you promise
that you’ll
keep break-
ing me, OVER
and OVER.

Sadly, even
a promise
to break
was not
the kind
of prom-
ise you
knew how
to KEEP.

editors note: Such cads, who can’t be trusted, even to be untrustworthy. – mh clay

Names For Months in A New Queer Year by Brendan Gillett

There are many news stories about
trans* people. None of them are another
murder.

Everyone wears heels and lipstick or
cuts their hair short or wears a suit and
cries or cares or acts and
dresses exactly the same because there are
so many ways to be femme.

We take to the streets to celebrate spring,
a time of renewal, a reminder that we will
always regrow.

Kiss a boy! Kiss a girl! Kiss whoever you want!
Everyone’s a little gay these days.

MORE KISSING! OR NOT! LIVE YOUR LIFE!!!

It’s too hot to be anyone other than yourself. Get
comfortable with that, with you, and let everyone
see.

In case you were curious,
the Moon is the only thing that will be
“just going through a phase” this month.

Summer is winding down, but it’s still
high time to be the best gay you can be.

No one does anything they are not
fully into, and no one tells them
they need to, either.

No-holds-barred fuckfest for
all genders. Again, if you’re into
that sort of thing.

We gather around tables with claimed
and found families, thankful for making it
this far while mourning those who are not
at the table.

Hibernation, rest, cuddling up
in our dens, feeling safe,
preparing to transition
to another Queer Year.

editors note: Not too late to retool; pick your fav POV and change it up. It’s still a new year. – mh clay

If you find yourself with a need for a read, we think “Basic Needs“ by Steve Slavin will feed that need indeed!

What we want may not want us. No one wants to live like that, but that’s how life wants us to live.

Here’s a tease to get you goin’: 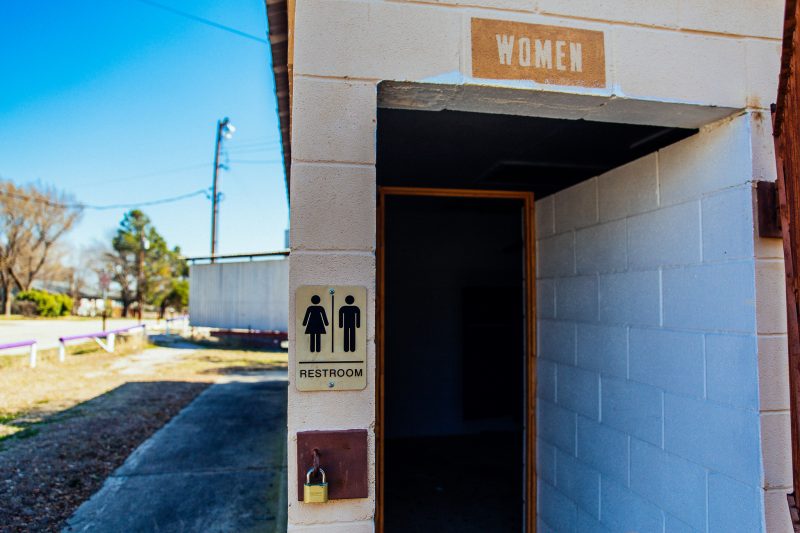 (photo “Knock Before Entering, Wipe Before Leaving” by Tyler Malone aka The Second Shooter)

You know exactly what it feels like when you really need to pee. And you can’t get to a bathroom fast enough.

I have found myself in that situation far too many times. But the time that was perhaps the worst was when I arrived at a crowded party, headed right to the bathroom, and found a line of five or six people ahead of me.

A kind soul directed me to go through the kitchen where I would find another bathroom. I pushed my way through the throng, hoping that I’d find it and that it would be unoccupied. As I flung open the kitchen door, I saw a woman about to take a gulp from a bottle containing a yellow liquid.

She looked at me with apparent curiosity.

“Apple juice. Why do you ask?”

“Yes, just go through the maid’s room and you’ll see it.”

I rushed to the bathroom, and joyfully relieved myself. When I came out, she was still in the kitchen, sipping from the bottle. She smiled at me.

“I think we just had a Kodak moment, but we would have needed a caption,” she said…

If your needs are indeed teased, get the rest of this read on right here! 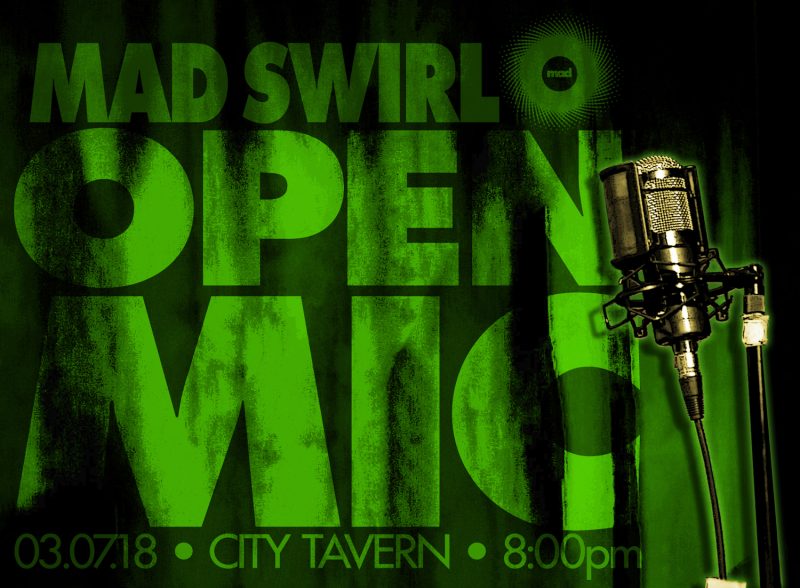 Join Mad Swirl & Swirve this 1st Wednesday of March (aka 03.07.18) at 8:00 SHARP as we continue to swirl up our mic madness at our mad mic-ness home, Dallas’ City Tavern!

P.S. For you Facebookers out there, check out our Facebook event page and get yourself a spot on our pre-list! 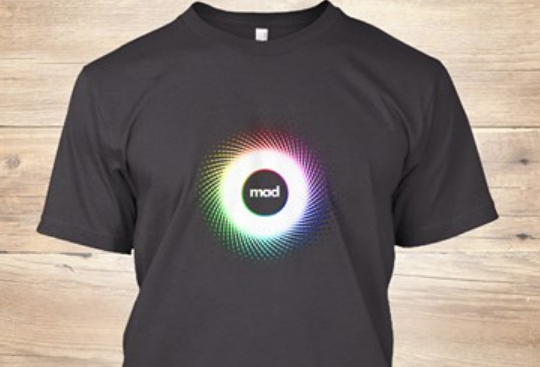