“Let your mind alone, and see what happens.”
Virgil Thomson 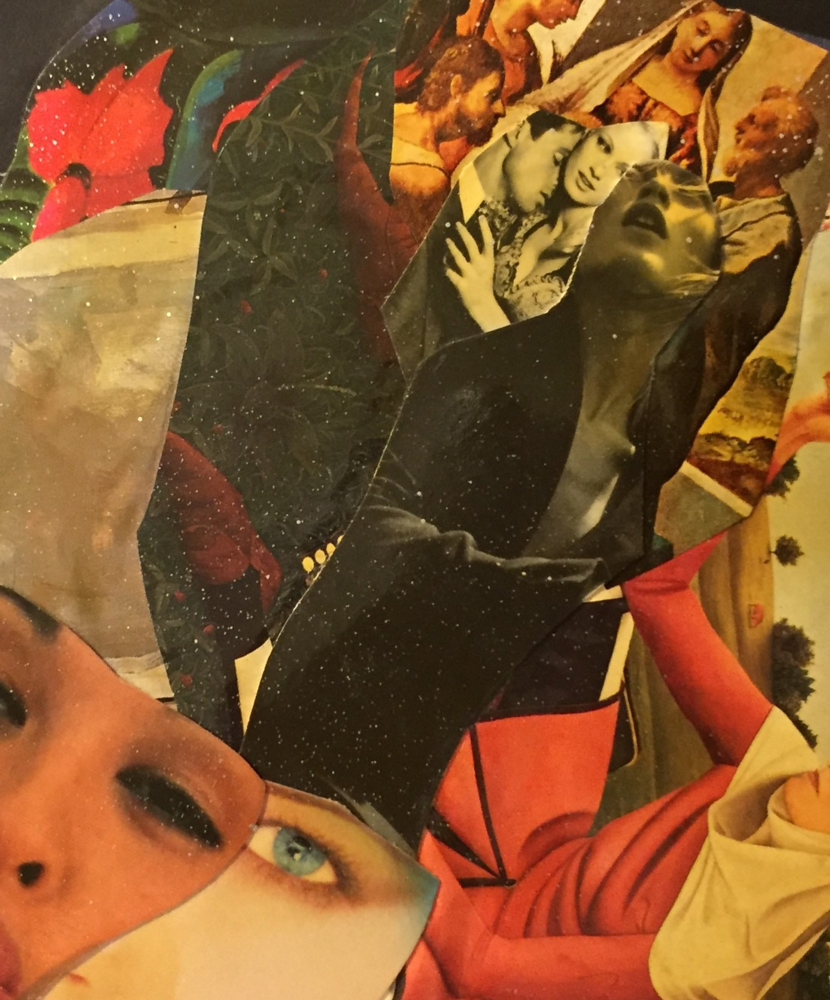 The Kissed (above) by featured artist Mike Fiorito.

To see more of Mike’s colorfully crazy collages, as well as our other featured artists, visit our Mad Gallery!

This last week in Mad Swirl’s Poetry Forum… we experimented with texted sex (swiped right); we enumerated every love lost; we sluffed a slight to find our light; we rhymed orange rooftop squeezed from tossed; we thought to unstuff thugs from thanks; we self forsook when fully cooked; we achieved poetic stasis in some new ekphrasis (times 5). Just keep those pen(cil)s moving, folks! ~ MH Clay 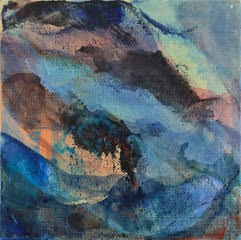 editors note: This is one of five ekphrastic works, part of a larger collaboration between KJ and another artist:

Creative folks need to actualize their potential beyond their specialties. Accordingly, American painter Nancy Ramsey and Israeli/American writer KJ Hannah Greenberg are collaborating on Exchange Rates, a collection of one hundred sets of work.

Follow KJ’s progress on this Developing Book on her site, here. Check out the other four poems with pics on her page. – mh clay

The Sickest Burns by Brendan Gillett

because you always know
where my skin is
the most raw
you have earned
the right to know
the settings on the stove
perfect for
roasting me, charring
my tenderness until
I can wear it like
memories, intimacy,
the pleasure of
fire, absence of sting
in favor of slow-
cooked perfection
these flashes add up over time
I am well-done now
take me out
eat me

editors note: The perfect recipe for… disaster? (We welcome Brendan to our crazy congress of Contributing Poets with this submission. Read more of his madness on his new page – check it out.) – mh clay

He listens, our prophet priest president, with dichroic interest.
Vietnam Dad didn’t collect bodies, only stories repeating
from when wide open Austin carried tower bullets to forever,
but not to Vietnam where Dad was first called a racist.
“I’m Irish,
nothing but bad potatoes, finger splinters, nothing to look at
but when I do look into a mirror, at least I don’t see
a nigger.”

Our prophet priest president asks to give thanks.

Winds ring trees Irish roughhewed into pews for natives
out of mountains, hungry for Irish daughters and their saving god,
potatoes that never see a damn thing, especially not disease,
prophet priest president
who all the whites know and love as much as whites can—
with respect.
Corncobs don’t hear whispered new words, new languages
as honey licked off broken fingers dirtied by church bombings
and suppertime phone screens cataloging absurd scriptures.
One’s eyes see all, warm bodies under bridges, cold corpses on asphalt,
anthologies of new wars for new decades in new billion-year-old light.
Loud prayers of suppers, silence in streets, entertainment for a prophet
priest
president.

Championed our best but bled of goodness from wrists dripping
to the ground where America was made, where spit dark clay made men
draw lines in backs kept from our front door while
behind locked windows and open mouths sits a country that doesn’t exist
but it’s been built by hand by generations by blessing
at the devil’s right hand, so grab your loved one to your left for grace.

Catch for us the foxes, the little foxes that ruin vineyards in bloom.
Feed for the wolves are starved and our mouths are empty.

We’re served
what animals become when they don’t run, we’re what happens when they sit
with an invited prophet priest president who loves that we don’t hold light,
the phantom touch of what we should be
never returns
as canned cranberries spill out in the shape they were contained.

editors note: Oh, the thanks we could thank until, like stuffed turkeys, we’re thanked full. Let’s shirk the shameful and thank again! – mh clay

Watch, Anita! The cloud’s blotted,
(The one that looks like Larry Fine), the
Sky’s sliced (or do I mean
The skies?!),
Top-a-th’-tenement’s
Blurred, it’s
An edible parabola!
Pale hot blue &
Pale blue ice
Carved into the air
By my orange thunk! & thwup!
Every impact spreads
The citrus ripple
To another dozen
Dilated nostrils!
I own every nostril between here
& Tompkins Square, Anita
(& most of the eyes)!

Until
The pebbled skins pink
At Manhattanhenge
& we retrieve

Our glasses from the freezer,
My juicer from the sink,
Your t-shirt from the shower head

& sip until the sky
Unblurs.

Quarantine by quality is enough confinement.
Let us not add the angle of moral amplitude.
Woodsmoke of ceremonies fails to enter my
porch, connections fasten without formalities.

Tristfulness arrives with certain defiance as
though proving a point. I spurn its summon.
Like the gnomon, I light my mind’s wick to
usher me away from the lightlessness.

editors note: Don’t need another’s compass to keep us in the light. We make our own choices. – mh clay

Every Woman I’ve Ever Loved by Lot Grundy

The sun and the moon were her eyes

Need a read? Well whether you do or not, we think you’ll need to read “The Firestorm“ by longtime Contributing Writer, Jenean McBrearty.

Here’s what editor MH Clay​ has to say about this featured short:

A colossal case of, “What you heard is not what I meant!” So much strife over who meant what, when it’s what you don’t mean that can hurt you. 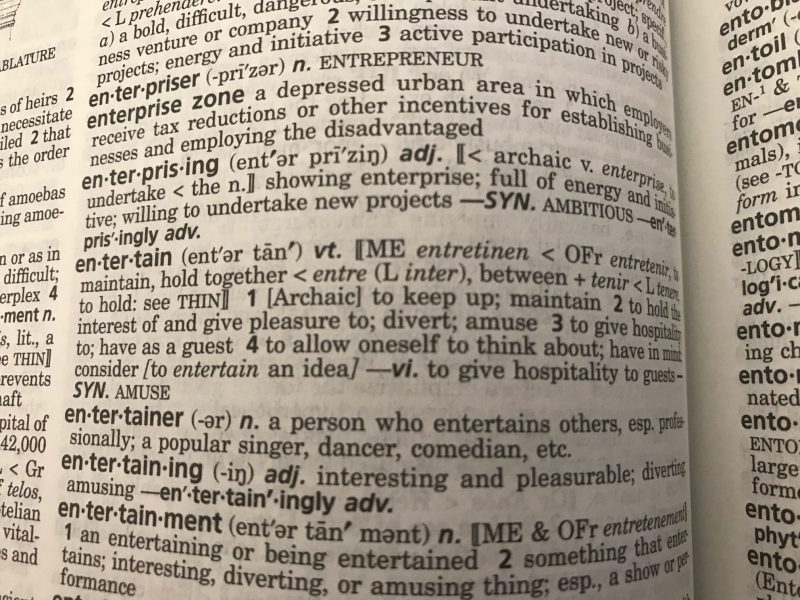 (“much ado about meaning” photo by MH Clay)

But Gary wasn’t your average Millennial. At twenty-five, the acetylene torch artist had a welding certificate hanging on his wall, a decently furnished apartment in Danville, and four-year-old Toyota Tundra that was three payments shy of being paid off. It isn’t surprising he got a lion’s share of the available pussy in town, but, wisely, he didn’t want to clutter up his pursuit of the American dream with a wife and somebody else’s kids, either. By thirty-five, he was a homeowner. So why did he clutter up his life with a firestorm?

It was, he maintained for the rest his life, an accident…

That there is quite the cliffhanger, eh? What firestorm did Gary find himself in? Will he get outta it? You’ll never know if you don’t click here! 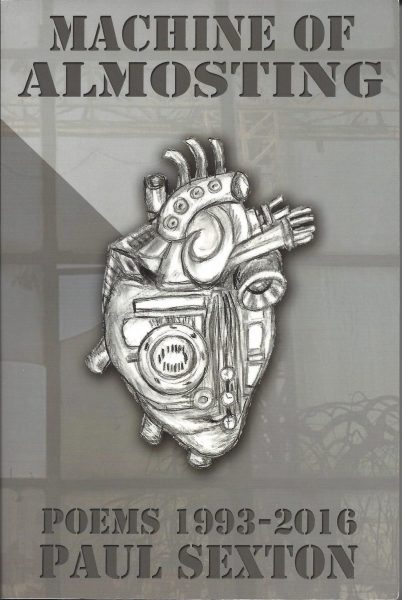 Another Mad Review: MACHINE OF ALMOSTING by MH Clay

23 years represents one-third of a man’s lifespan here in the great state of Texas. One third of any life represents a lot of growth and change, peppered with bits of joy and pain. One third of a poet’s life, lived in space and on the page, presents an evolution of awareness and development of voice.

MACHINE OF ALMOSTING is an autobiographical collection by our Contributing Poet, Paul Sexton. These 204 poems take us, chronologically, through 23 years of his experiences; from early observations of his surrounding world to forming his philosophical perspectives to surviving in the work force; from finding a mate to having children to separating from his mate to the heartache of divorce; from awakening to the realities of corporate control to bouncing through the single life again; from finding another mate to losing that mate through tragedy to struggling for meaning in what’s left over. That’s a lot to pack into any life. From this poet, in his unique voice, there is a lot with which we can all identify.

It’s Paul’s voice which makes this collection so engaging. (We read it over a couple of nights, like one would read a novel or a biography.) He turns life circumstances into poetic reverie; sometimes with exhilarating eloquence, sometimes with biting, sardonic wit.

Of these 204 poems, we earmarked many which we thought best exhibit Paul’s range of voice and subject matter. We could print them here, but it would be better for the reader to buy the book and read them all…

Get the whole review right here!