“I think art is a consolation regardless of its content. It has the power to move and make you feel like you’re not.” ~ Jeff Tweedy 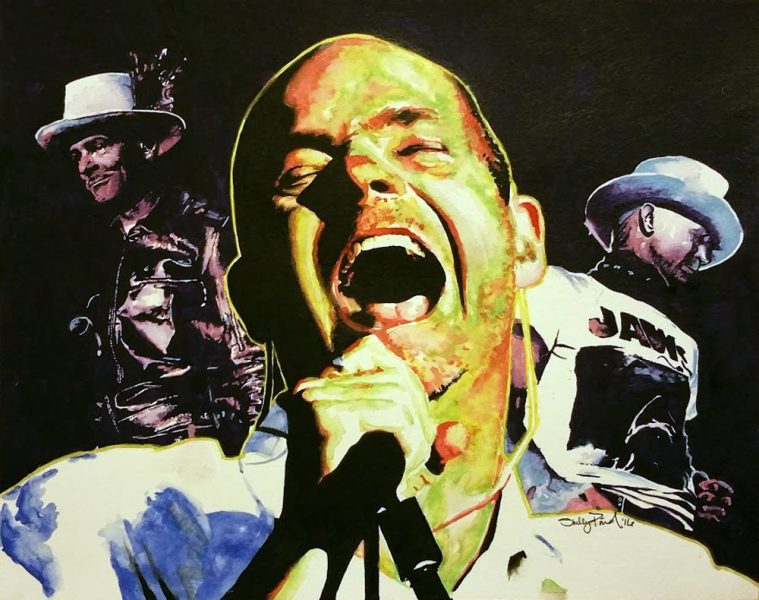 “Gord Downie” (above) by featured artist Shelly Denning. To see more of Shelly’s mad canvases, as well as our other featured artists, visit our Mad Gallery!

This last week in Mad Swirl’s Poetry Forum… we sang of earth and dreamed of moon; we slept in warm indifference; we danced in night to a dangerous tune; we basked in our omnipotence; we pushed through night on a pure heart train; we pushed to capture our gods in vain; we lost love’s savor from our party favor. It’s better to have and be held. But if we must end, end well. ~ MH Clay

As I was never invited to
parties, I opted to gate-
crash them:
one occasion I was
talking and moving in
close to a brunette when
this guy eases himself in
between the brunette
and me:
I tell him to back the fuck-
away, which he does:
‘Do you know who that is?’
the girl asks me, I shake my
head:
‘It’s his house, it’s his party
and he’s a friend of mine’
he returns with 2 side-kicks:
‘I’d like you to leave now’
he politely asks:
‘You want to come with me?’
I ask the woman:
she takes my hand and we
walk away and for three
years we loved and fucked
each other until it meant
nothing.

Hades to Mankind by Maryam Sheikh

I am ashes and I am fire, I am the burning building
and the rage with which the Lord sent Adam away.
I am the universe held within your fingertips
As you write letters and apologies to sadistic bullies.

Dynamite, verses written within my tortured hand,
Held tightly against the grappling waves
Made to buy weapons of mass destruction, I
Am a broken vase in the middle of your mansion.

Touches of soot, iron and lead, beasts crawling
Beneath the ground- roaring from underneath as
Spiritus Mundi, the gyre no longer in motion
As children rise covered in blood and soot.

A strange stench surrounding you,
Drenched in broken dreams forming a
Hearth around the ones you claimed to love.
Half-breeds and fucking nuns,
Monasteries all over cities under God’s eye,
And in his name, under Apollo’s light, they destruct lives.

A cautious imitation of the end of the world,
The Mayans, Egyptians and men of God
Predicted your bloody death, as you lay in bed
Held within a tomb of greed,
You can plead and scream but
The seed you sowed has finally come to reap.

editors note: A lesson for any who (think they) have no more to learn. – mh clay

The train lunged in
and out of order. Heads swayed
like displaced seaweed mocking
gravity. The stars and moon remained
in place. Thick metal wheels turn
with conviction. There is no shame
for those asleep, leaning onto windows,
newspapers for pillows. The miles create
a low hum. The engine possesses a pure heart.
White smoke rains upward. Surrounding
breezes are pushed aside; weight has
privilege. Nameless roads pass by
within a blur like uninvited relatives.
Darkness blocks the view. The engine
scowls forward. Vanity is a boastful drunk.

editors note: No tougher train to ride than your train of thought. – mh clay

Ten Thousand years are just a day of your soul
Maybe you are more ancient than the legendary God
And the silver city on the other planets
blooms to you on the blue smiling coast
While you dreamed about the mysterious words
and the songs of the soul from the golden heaven
which let you forget the earthly library
and the past highfalutin classics of the East and the West
10.1.2016

editors note: Blurring the line which would separate man from god. (We welcome Hongri Yuan to our crazy congress of Contributing Poets with this submission. Read more of his madness on his new page – check it out.) – mh clay

Beautiful danger, you smell of sweet perfume
You grasp my heart with your silky fingers
And cast it into raging rivers and quiet interludes
You are a love story written by restless hands

Beautiful danger, take me with you
You make my spirit rise to your heights

FOR THE SCHOLAR WINTER’S RESTING PLACE by Sam Silva

cozied by cracks
in that feral cave

and watch History unravel
in the back of your psychotic mind

…abstract images! with hints of gods and beasts
layer these peopled immersions
in fear
and love
and passion

…places
all sexy
and humid and decadent

…and innocent places
which warm the frightened soul
with a sense
of benign
…indifference!

editors note: Read in the half-light of an eclipse to amplify our sense of insignificance. – mh clay

A Prophecy of Earth’s Final Hours by Susandale

Comes the night that swallows our feeble lights
And the moonstruck girl who sleeps under a gypsy moon
There is one day and a hundred years
Of the slow death of life
When burns a brazen sun
And howl contemptuous winds
There is a sad boy who
Stands under a broken bridge
And sells his songs
For a sixpence and a memory
There are loves’ contortions: fierce, false
Spawning along a boulevard of broken dreams
And rains cold, that sing one kind of song
The barren sands, another
There are mystic dreads pounding at the door of dark
Songs ringing with the skirling music
That transcends earth and time

editors note: What we predict of moon is nothing compared to what she predicts of us… – mh clay

If you gotta a Need-for-a-Read today, we think “For the Love of Santa“ by Contributing Writer Ron Riekki will do the trick!

Here’s what short story editor Tyler Malone has to say about this week’s featured short:

You won’t survive this no matter what you believe in. So give in to life. Give into madness.

Still don’t believe us? Good. Question everything! But you just might be a believer in non-believing after this read! Here’s a tease for ya’: 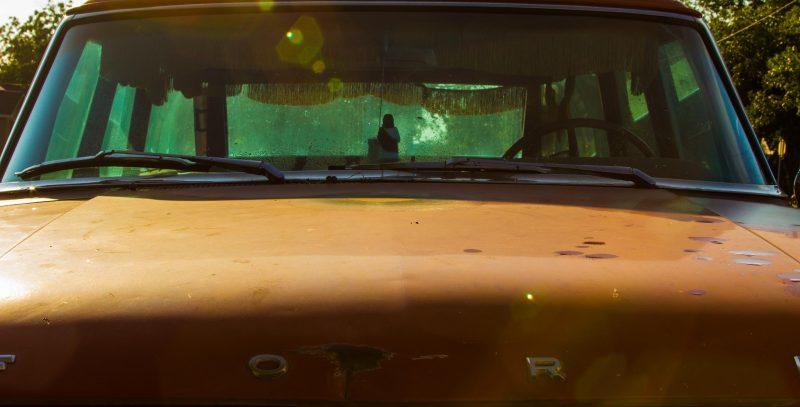 (photo “Spacegrass, Whatever It Feels Right” by Tyler Malone aka The Second Shooter)

Ever since I was a zygote, my father told me that Santa wasn’t real. I’d unwrap my presents on Christmas and afterwards he’d show me all of the receipts and tell me that they didn’t come from the North Pole but from KMart. He’d tell me it would be physically impossible to live on the North Pole unless you’re a snowy owl or an orca. He’d ask me, “Is Santa a walrus?”

“Look up at me when I’m talking to you. Is Santa a snowy owl?”

“Santa Claus is not a snowy owl!”

“Because I’m Santa. And I’m not a goddamn snowy owl.”

Then when I became—I forget the age—ten or eleven. Maybe thirteen. Basically when I hit the double-digits, dad pulled me aside and said, “I have to let you in on a secret. Santa’s real.”…

Huge THANKS to The Dallas Morning News reporter Alejandra Salazar for spreadin’ some Mad Swirl lovin’!

Here’s our lil bit but PLEASE check out the whole article. A great shout-out for the whole diverse & divine poetry scene here in big D: 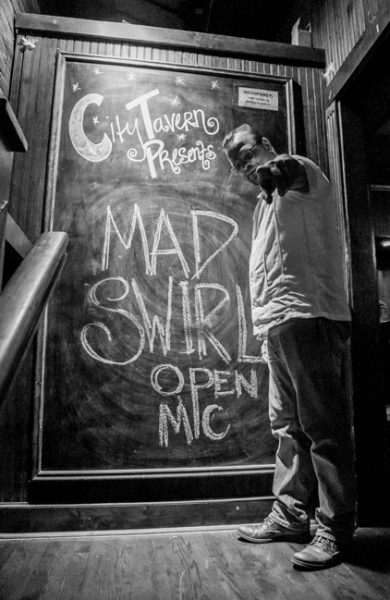 Spoken word has actually been thriving in Dallas for a while. Mad Swirl has had a front-row seat to Dallas’ poetry scene since 2004, when founder Johnny Olson set up Mad Swirl’s First Wednesdays open-mike series.

Initial growth was rocky. Olson wasn’t sure if the event would survive in the long term. He was happily proven wrong. “We’ve learned that if you offer people a platform, they will come,” he says.

The timing was excellent. Dallas’ art and literary scene was starting to ramp up. Curious poets — including MH Clay, the Mad Swirl zine and blog’s poetry editor — were making a name for themselves on Mad Swirl’s stage.

“The idea of free and open, no-holds-barred expression is very much alive here,” says Clay. “It’s like church — there’s a holy energy to it.”

At Mad Swirl, poets feel comfortable enough to experiment with their craft at First Wednesdays because the group strives to foster a safe, positive and supportive stage.

Even today, when the City Tavern gets packed to the brim on First Wednesdays and artists are limited to two minutes onstage apiece, when unpredictable crowds range from enthralled to apathetic, it’s all about the poets. Taking the stage often requires engaging in raw honesty. Spoken word means baring one’s soul to a room of total strangers. It’s a feat worth celebrating.

But there’s a caveat to growing these spaces: Organizers must be willing to listen and adapt at a foundational level.

“If you’re going to be opening up a space that’s safe for people, you have to spend time with the community, build that trust first,” says Olson. “The space we’re holding here is sacred, but it has to be a grass-roots effort.”