“Great art is the expression of a solution of the conflict between the demands of the world without and that within.” ~ Edith Hamilton 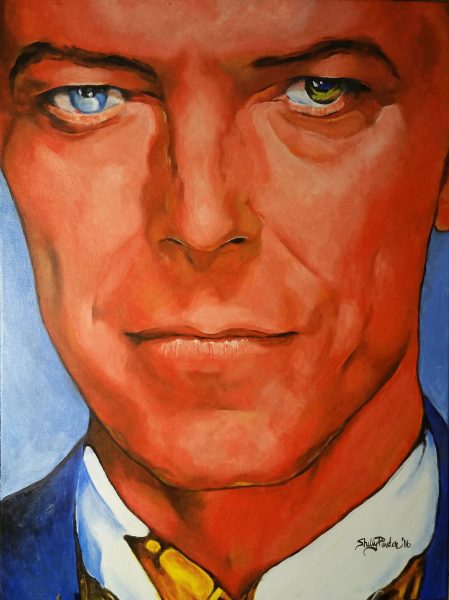 “Bowie” (above) by featured artist Shelly Denning. To see more of Shelly’s mad canvases, as well as our other featured artists, visit our Mad Gallery!

This last week in Mad Swirl’s Poetry Forum… we floated dry ‘neath Hemingway’s sky; we learned enough to disappear; we praised imperfect, lit through lens; we recalled our roots in a reptile’s eye; we listened large to what lonesome hears; we gave a hand to glad childhoods’ ends; we saw how sad it is to be, not rubbernecker, but rubberneckee. Eyes on the road, pen to the page. ~ MH Clay

Over Here by J.K. Durick

Over here in the breakdown lane we
Know vulnerability, the weaknesses
Of man and machine, of flat tires and
Erupting radiators, dead engines and
Empty tanks, we know being passed by
Watching the passersby speed by, feel
Their vibration and tug, over here, we
Know a loneliness reserved for the road
Become the person they identify with,
The very person they never want to be.
This must be analogous to graver things
The dark night of the soul, the pink slip
At work, the rejection slip in the mail,
The final divorce papers, that phone call
The frightening lab results, the dreaded
Diagnosis; in some ways we are all over
Here in the breakdown lane, leaning on
Our cars, phones to our ears, trying to get
Someone, someone to notice us and help.

A Father’s Hand by Zer0

A hand.
A father’s hand.
A father’s hand is meant
To cradle, to rock, to support,
To pat backs, to push bicycles along paths,
To ruffle hair, to caress cheeks, to tickle ribs and feet,
To turn pages, to model the use of pencils and pocket knives,
To redirect the lost, to lift up the fallen, to hold the frightened,
To comfort the saddened, to shine light into dark corners and closets.

Though you don’t know where it comes from,
You feel the anger seeping from his heart,
You feel the frustration flowing from his mind,
You feel the hatred in his eyes
Converted by some fantastical feat of physics into force,
Applied to your patted back, your caressed cheeks, your tickled ribs,
You feel his fear of inadequacy, you feel his father’s hands,
Until you’re lost and fallen
Until you’re frightened and saddened
Until you seek dark corners and closets for comfort
Until you look down one day and realize that his hands are now yours.
His hands have molded you, have pointed you down paths,
Have modeled forceful responses to frustration, to anger, to hatred, to fear

I sure don’t know, but god damn it,
I’m trying.

editors note: Sounds like this father has the task in hand. – mh clay

the big house by Lisa Moak

the house was too big
too empty

it echoed
her loneliness

with each reverberation
louder was the pain

it shook her
like a child shaking his jacks

before he throws them
to the ground

she rattled about
bouncing off walls

and bumped her head
a time or two

but nothing changed
the house did not grow smaller

or her emptiness lessen
and she wondered

if it even mattered
how large the house is

to people
who are alone

editors note: Empty is empty; large or small do not apply. – mh clay

From the Terrace by Gary Beck

After thousands of years
of uncomfortable evolution
I sit on concrete balcony,
far removed from nomad hordes,
earlier agricultural enclaves,
medieval conjoinings,
warming myself
in the weak, spring sun,
not entirely different
than an elderly lizard
hulking on a heating rock
lethargically awaiting
the encroaching desert.

editors note: Even in the wasteland, we can work on our tans. (This poem is part of Gary’s most recent collection, “Tremors.” You can get it on Amazon.) – mh clay

why does my photographer friend
ask the models to avoid greasepaint?

I think
the camera reciprocates a mirror

The mirror makes an impression
and reveals the concealment
of flaws

The camera mocks the disguise
and celebrates light

Not in Arizona by Tom Hall

On a bright and sunny afternoon with cumulus clouds
Deacon was finally so bombarded with information
That it filled his pock marked face ‘til it was smooth.
A force so strong all excess fat blew away (a whole new wardrobe)
Deacon became a fine-looking man.

That had been his biggest hope in life
He rejoiced beyond the meaning of words
His eyes and ears and mouth fulfilled
(if you’re thinking mannequin, I’ve fumbled)
He was every bit a living, fluid, joyous human being.

Achieved by these gods’ torrent of information
There was no source, nor need for output of any kind.
Deacon was perfectly filled in every way.
If you drink too much ambrosia you can always throw-up
He’d found perfection so would never be heard from again.

editors note: If that full, not anywhere. – mh clay

The Old Man And The Root Beer Float by Randall Rogers

He couldn’t get
the screw cap off
the bottle of root beer.
He struggled and
struggled but he
couldn’t get it off.
He had a large glass
full of vanilla ice cream
but no root beer.
It did not get him
down. He had vanilla
ice cream in a glass –
a dry root beer float –
instead. “Sometimes
life’s like that,” he said
to himself, “no root beer
for your float”. The
old man sighed and
ate his plain ice cream.
While he ate he called
Ernest Hemingway
to share
his story.

If you ARE in need, we got quite the powerfully-packed short-short read (433 words) titled “Boomerang“ by Naushena, ready & waiting just for you!
(photo “Flowers for the Living, Dirt for the Dead” by Tyler Malone aka The Second Shooter)

Death begins at life, the only thing to figure out before the end is how to live with the dead.

Here’s a bit to get your read feed goin’: 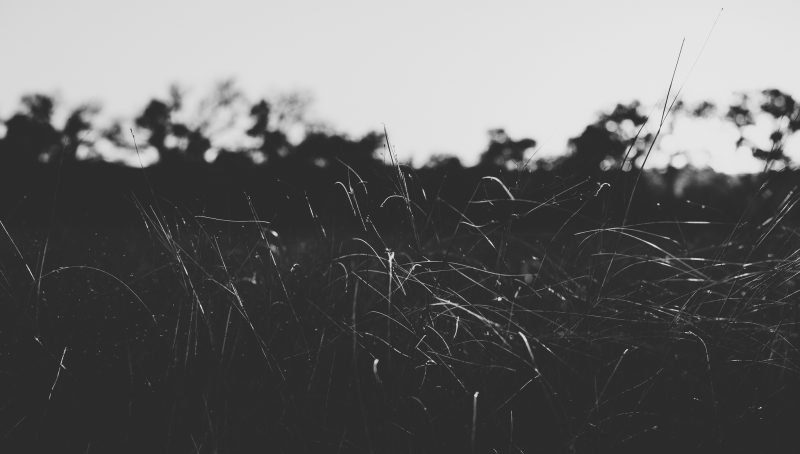 (photo “Flowers for the Living, Dirt for the Dead” (above) by Tyler Malone)

She sat like a statue on a charpoy, staring vacuously in the space. A plate with lentil curry and bread was lying beside her but she seemed to have no appetite. She was a middle-aged woman with attractive features but a forlorn look on her swarthy face, her hair unkempt and dusty. She has not changed clothes for five days. Abruptly she took a piece of bread, dipped in the curry and put forth as if giving to a ghost. She uttered benignly,

“Eat, you must be hungry. See I have cooked your favorite dish.”

Adam and his family watched her while sipping their tea. Crimson hue was spreading in the sky and they had to reach their hotel before dark. This was the only roadhouse in the desolation of the desert where they had stopped by to have some refreshments. He had been driving five hours consecutively and wanted to stretch. He beckoned the owner of the motel for payment. Instantly, a loud crash was heard and every one turned to the sound. The woman had thrown her food down and was shouting frantically. The owner rushed to her but she started running here and there. She was uncontrollable, wild. With the help of few men, she was caught and tied to a tree with a rope. The man slapped her hard, twice. She winced and started sobbing incessantly like a child who had lost his toy.

Adam told his family to board their jeep while he went to inquire about her.

“What happened to that woman? She doesn’t seem fine.” he asked inquisitively…