“My works are an imitation of my own past and present.” ~ Barbara Hepworth

“LITTLE LAMB” (above) by featured artist Joseph Shepard. To see more of Joseph’s mad collages, as well as our other featured artists, visit our Mad Gallery!

This last week in Mad Swirl’s Poetry Forum… we felt for him who forgot his hymns; we played freeze tag with the bugs in our head; we blew noses, then others, to raise the dead; we took a look at a misread book; we conjured a crater from caldera into swimming pool; we unmasked mighty “us” to show a bunch of fools; we sold gum for a tenner, tryin’ to make life better. We sell what we must to keep what we can; write it all out in longhand. ~ MH Clay

My bosses are men.
For seasonal minimum wage
I stand all night after my
daytime office gig
growing corns on my feet
building up that nest egg and
desperate anyway
for anything to keep busy
so I don’t have to brood
melancholy about my latest
soured romance.
No time for breaks
or vacation or illness,
no insurance offered anyway.
Across the hall
is an old ladies shop
and bubble-haired Blanche
in lilac polyester
changes the furs in the window
every other hour —
mink, chinchilla, fox,
I didn’t even know they
still sold pelage anymore,
it passes the time.
And I’m supposed to be
aggressive and
SELL SELL SELL!
(but in a subtle way)
cottons/silks/wood-fiber rayons
at 200% markup
“they’re all natural ma’am
and would you like some tasty
Kama Sutra Oil of Love
to spice things up at home
it’s entirely edible
and isn’t it a fine day?”
But I always get the wrong reply
“Just looking.”
And I’m supposed to be
pleasant to rich
La Jolla matrons with
tanned cheeks pulled tight
below taut botox foreheads,
long strong bodies,
high inflated breasts,
chic shod feet smooth thighs
Rolex, Mercedes-Benz,
American Express,
spare time
“how much is that scarf and
don’t you ever smile?”
(as if it’s their due)
Once, while shopping
for bargains and kicks
in that Wild West
border town Tijuana
where they still sell gas,
food, water, used goods and
political agendas by
hoisting loud noisy speakers
on top of old cars,
just our friendly neighbors
to the South, and me
sitting safe in air-conditioned
station wagon
sipping iced-tea in Tupperware
came a dark-eyed girl with
dirty bare feet
popping belly-straining rusty pins
instead of buttons,
dusky cheeks,
but not from tennis,
nose smashed against window.
On hip, babe dripping snot;
where is the milk
for that dirty bottle
hanging from it’s lip?
And here, por favor
take a ten-spot for that
pack of Chiclets
you’re selling
blatantly ignoring the signs
in the Gringo Hotel
admonishing guests not to give
money to grimy children
on the street selling tokens
so they wouldn’t drop
out of school
and that’s just where
I left my smile, back in
that steamy car
as I insanely hop like a
nocturnal bird on
three-inch tooled leather
heels from Spain.

editors note: Nothing but a smile for a grimy gal; tryin’ to make a dime where the moon don’t shine. – mh clay

In the blink of an eye of eternity,
with ceaseless Darwinian stride
from our earliest stage to modernity,
we dwelt on this earth and we died…

It wasn’t our land though we thought so
while stomping about in our frets.
We rhetorized peace, yet we fought so
throughout our begats and begets.

In a wrinkle of space in infinity
we crowned ourselves king of the sphere,
killing everything in the vicinity
without even shedding a tear.

editors note: Ah, yes! Waiting to see “enlightenment” be more than just a word we know how to spell. – mh clay

Being
Indulged
Into silence
Madly,

A thought,
Vague utterance
Of the vast;
A thunder.

Like
The flash of
Lightening
A current of
Brain wave
Trigger.

To become
A lake, where;
I can swim
So deep.

editors note: Let’s bring back those old folk remedies! (We welcome Randall to our crazy congress of Contributing Poets with this submission. Read more of his madness on his new page – check it out.) – mh clay

The Pennsylvania Hotel by Diana Rose

The mantis sat staring right at me…
Eyes bulging… hypnotising
No funny movements the
World is watching… there is no encore, no time to lock the ten locks shut
No time to hammer the windows shut
No time for the newspaper clippings to be taken down and moved for the press
The parrots are watching from the high wire joined by crows of higher spirits
The lizard king has joined the mantis on the window sill they are moving in on me
The knife that was hidden under the desk is gone…
There is no more air left in the room
I could crawl but their eyes still follow my every movement
The crows circle the outside street light waiting for the door to open
I’m not turning on the light
The mantis knows where I hide
The crows peck at my thoughts, this is the morse code to the dead
Technically I am still breathing technically I may have a pulse
But the laughter is getting louder from the spider of the damned
If I am very still they may forget I am here

editors note: Need a check up for checkin’ in to be checked out. Yeah, don’t move… – mh clay

IN THE NORTHWEST WINTER MORNINGS by Brian Wood

In the northwest, winter mornings come late, opaque,
And one day when the sun hovers but does not rise,
I drift off, more tired than I knew. When I look north
I barely see an outline of light, just tracing
The top of the cedars. I look west and see our
Local church is having its last ever service,
The faithful come two by two, their breath trailing frost.

The last preacher of this last dream church now lays out
The final doctrine, that our light has come, and it’s
Us, and always was us. “Like Jesus said, we are
The light of the world; the bible also says, ‘Now
Faith is being sure we will get what we hope for,’
And what could be better than that? Go in peace.” I
See a few of the older ones standing at the door,
Lingering, hoping that at this last hour they’d sing
A song of the Lord, in this last house where such love
And sorrow meet.

And the preacher would like to, what a lovely thought,
But they cut all that out years ago, and it’s almost
Noon, and damned if he can remember one.

editors note: We can hear the song, sung in the light. Can’t remember the lyrics, but we can hum along. (Congrats to Brian! He has a new collection released, Weekend Getaway at Generic Hotel. Get your copy here.) – mh clay

Need-a-Read Day? This week’s featured short story at Mad Swirl​ comes from first time contributor, Taylor Evans​! Although this one might be her first, we have a feeling we’ll be reading a whole lot more from her in the future.

“When who you are hates who you’ve been, you’re on the cusp of something perfectly devastating and perfectly human. You must be human for that to happen, though. Too many things have human skin but there’s nothing humane underneath.”

Here’s a bit of Taylor’s “Dying in a Fire in Your Son’s Bedroom” to whet your reading whistle: 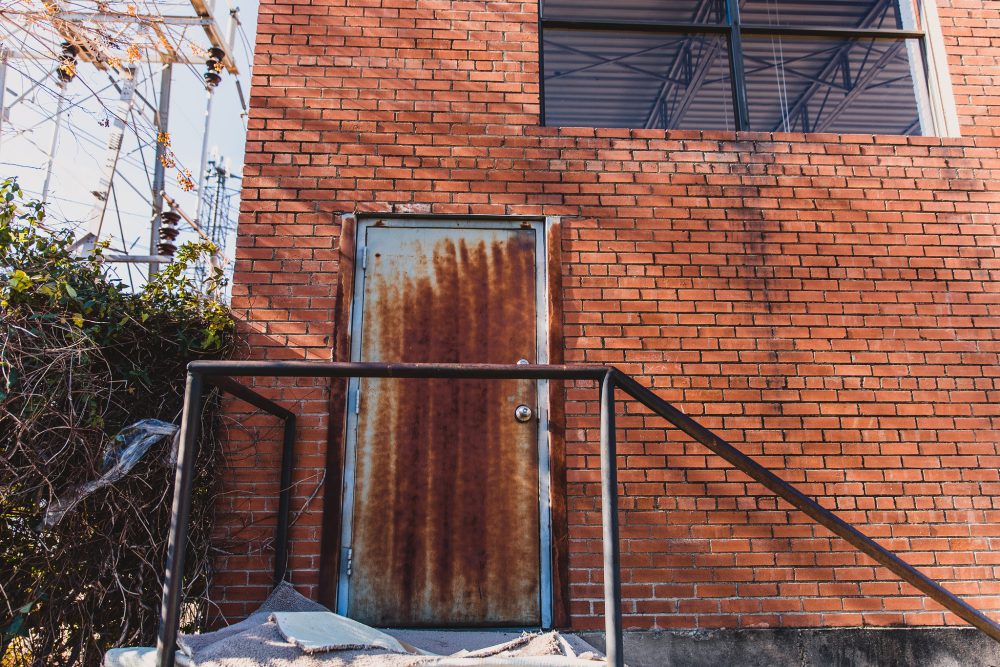 (“Adulthood’s Door” (above) by The Second Shooter​)

The marriage was over. Pete realized the damage was irreparable when Julie, in a manic episode, disappeared without warning and returned three days later with a twelve-hundred-dollar puppy she morbidly named Kitty Genovese. Having been replaced emotionally and physically, Pete took over the room of his twelve-year-old son Elliott, who was then expatriated to the couch. Three days later a brand new bunk bed was delivered to the house in a cardboard box covered with damp handprints. Elliott took up permanent residence in his sister’s bedroom.

Pete’s guilt was assuaged and he settled into his new bedroom. If he left the door open he could hear Kitty running around, knocking things over. He started keeping it closed and when one of the children knocked on the door he pretended to be asleep. Soon he developed the habit of locking it—something his parents had never allowed him to do when he was a child in case of a house fire. Now he was an orphan and a divorcee, more or less, and he could do whatever he wanted. And anyway, he wasn’t worried about dying in a fire. It would probably make him into a martyr among cast-out husbands. He fantasized about it as the condensation from his 7 and 7 formed water rings where Elliott’s glasses had once rested…

Get the rest of this big ol’ dose of fictional reality on right here!