“A drop of water, if it could write out its own history, would explain the universe to us.” ~ Lucy Larcom 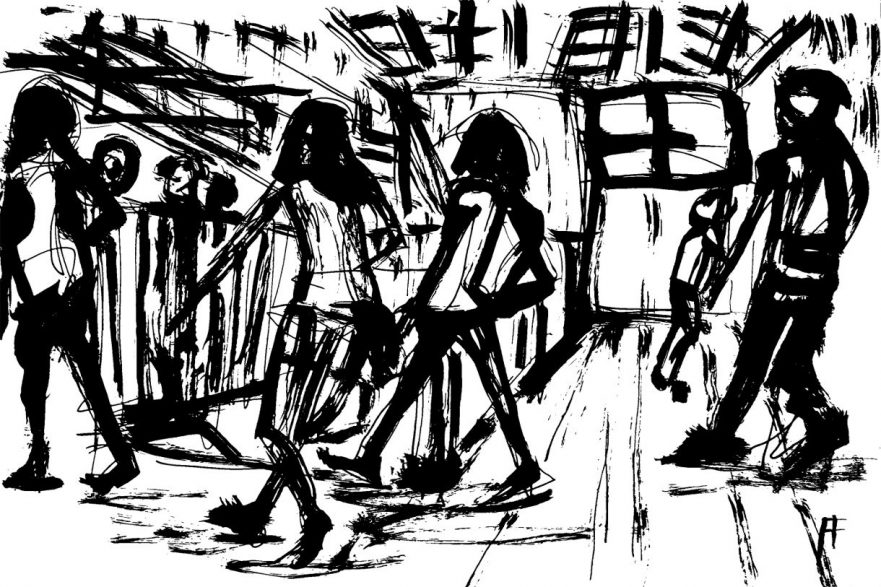 “Vancouver Transit (1)” (above) by featured artist Allen Forrest. To see more of Allen’s mad illustrations, as well as our other featured artists, visit our Mad Gallery!

In Certain Matters of the Heart by Donal Mahoney

It’s a matter of the heart,
the doctor says,
and he can fix it
with catheter ablation.
“It works miracles,” he says,
“in certain matters of the heart.”

He’s been a cardiologist for years.
“Take my word for it,” he says.
“You’ll be sedated. Won’t feel a thing.”

No excavation in my chest, either.
Instead, he’ll make little holes
in my groin and snake tiny wires
to the surface of my heart
and kill the current that makes

my heart race like a hare
at times and mope
like a turtle other times.
He’s never lost a patient.
“You’ll be fine,” he says.
“Trust me.”

Nine out of 10 ablations work.
I’ll save hundreds a month, he says,
on medications. No more Multaq.
No more Cardizem. And I’ll never
have to wear a heart monitor again.

“Shall we give it a try?” he asks.
“I’ve got an opening
two weeks from Monday.
It’s an outpatient procedure.
You’ll go home the same day,
rest for a week and then resume
your usual activities, even bowling.
Do you like bowling? My nurses do.
I prefer woodcarving.”

“Okay, Doc,” I tell him.
“I’ll give it a try, but tell me,
where were you 40 years ago
when the kids were small
and I was young, like a bull,
and a different matter of the heart
dropped me like a bullet.
Are you sure my heart’s still ticking?
Where’s your stethoscope?
I haven’t felt a thing in years.”

editors note: You can lead a heart to fixing, but you can’t make it heal. – mh clay

A long straight raincoat
would drift through the village;
a thin bald man inside
taller than a telegraph pole.
Oftentimes he’d stride by our
farmyard and I’d shoot him dead
with my Winchester while rolling
for cover behind the dustbin.
His ghost returned recurrently
ever more peculiar, strangely
menacing like a preacher waiting
to claim our pitiful souls.
Regardless I’d tracked down Kincaid,
that no good rustler would swing
that night, and so he did as I waved my
rifle before his scary blue face.
His legs frantic, froglike eyes bulging,
I ran inside shouting, ‘Mum! Mum!
Gary is on the washing line
and he wont come down.’
She rushed into the yard to find the
raincoat holding my brother;
I hid behind the tall rhubarb
relieved to hear his cries.
Through huge leaves I saw the
raincoat leave in loping motion
without saying a word with mum
screaming my name into the night air.

editors note: When wet and weathered is better than dry and… – mh clay

The masses by Jonathan Beale

The people: as knights, bishops and queens.
Pawns…Pawns…Pawns. treading the stone
Stone conquers life –
Blood, bone, and flesh.
Are eroded upon this spinning wheel

Desolation is the fear of flesh
Pawns dream (that’s if the Fates allow)
Lives are galleries within galleries
Each October thrives, anew.

They are eroded still, upon this spinning wheel
The oils, now hard, lost the image
Of ages long past, the long past remains
To be uncovered once more

editors note: For each of us, it’s a new discovery: We’re stuck in repeat. – mh clay

The Eye of Horus by Paul Sexton

When I think about them
my head hurts.
When I talk about them
other people’s eyes squint.
When I look for them
they are hard to find
except for the signs
the subtle symbols.

Where they live
must be far away,
places that I have never been,
but they must have computers
and telephones
and they must meet occasionally
I suppose,
at the Bilderberg Hotel
or the Bohemian Grove.
What they do there
must be Bacchanal
decadent, even alien
or perhaps it’s all just business
the crunching of numbers
the twisting of fate
the shaping of the destinies
of the faceless
the proletariat.

We should find them.
We should kill them
if we can, but

when I think about them
my head hurts,
so I stop.

editors note: They’re not so subtle these days and they’re wearing us down. – mh clay

editors note: Obsessed after ecstasy. Edged toward extinction, instead. (We welcome Adam to our crazed conclave of Contributing Poets with this submission. Read more of his madness on his new page – check it out). – mh clay

Today I want to walk the beach and see no one at all
As if it were winter when the beach can become my private playground
I’ll walk someway before stopping and sitting on the pebbles
In order to smoke a joint and take a contemplative moment
A quiet place I can actually sit and think
As round this way during the summer months all we get is noise, noise, noise
The noise of motorbikes being driven up and down
Desperate to pose and be seen as being cool
Loud obnoxious persons who take up the entire pavement
Whilst screaming at each other about what a great time they are having

I’ve seen young women walking through town on a Saturday afternoon
Carrying a huge inflatable penis and thinking they are having fun
I’ve seen young guys walking through town wearing Jimmy Saville masks
About a week after all the allegations came out and they think they are having fun
Neither of these are my idea of having fun
For me I like nothing more than sitting, quiet, and simply drinking
But round here these days there ain’t many places you can do that
What with music ruling all the pubs on St James’s Street
Whether it is country-blues or karaoke disco-pop it’s all here
But put simply on a Saturday night I don’t want to hear

If I want to listen to music I got enough of it at home to listen to
Sitting drinking and listening to The Stooges or Coltrane or some other lost classic
Whilst being able to do whatever I want, smoke, stare out my window or eat some food
And out there, in this town, are people who I want to avoid
Those screaming hen and stag people who very occasionally lay siege to my local
Before realising that here we like beer and spirits not Jaeger bombs and bloody cocktails
Then they suddenly realise that this ain’t a place for them
So they fuck off to West Street to pass on their STDs
And come Monday morning, a time I love as I never work, it feels as if town exhales
Farting the masses out of their weekend psychosis and back to their mundane little lives

editors note: Mundane Monday, so good to me… – mh clay

I Dream in Oceans by A.J. Huffman

waveless expanses of blue.
Not breathing or drowning, I float,
an empty cloud in a miserable sky.
I pick at veins to lure companions,
believing the sanctity of devoured
is preferable to the continuous
resonation of devoid.

“Horror stories don’t always claw from youth, but they do come back from the dead to take a bite or two without asking. Without us wanting, we sacrifice ourselves to monsters and say it’s for love.” 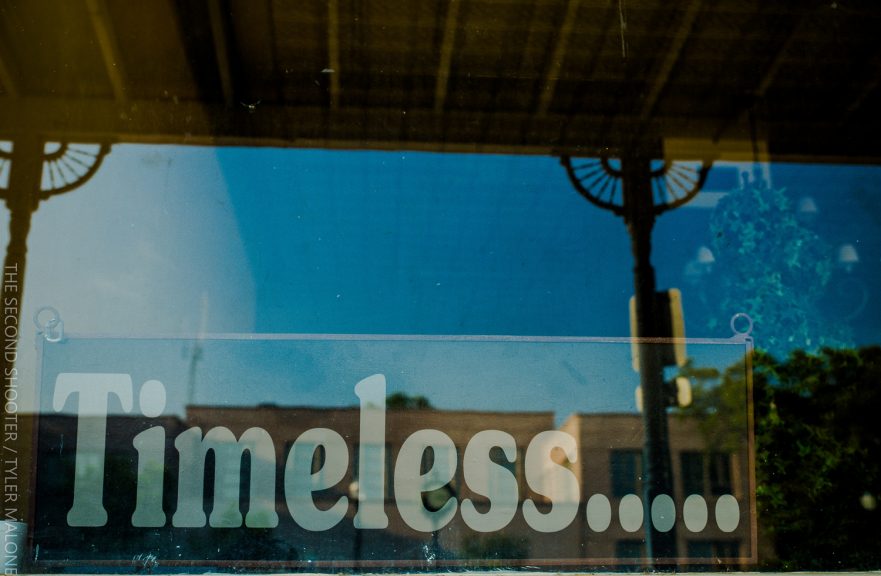 The haunted trail was a sexy choice, Owen reflected in study hall. It was a perfect combo of darkness and closeness: make-out city, baby. Not that he was particularly anxious about it. He liked being around Amanda Overstreet; kissing would only be a bonus. In fact, he just plain liked her. That purring voice, man! Those swimmy eyes. Owen grinned and tried to get back into his History assignment. She was out of his lanky league, sure, but not by much. If he made a good impression, if they had a great time on this, their first date, then the Homecoming dance, two weeks away, was a real possibility.

The glossy lips. The glistening hair. Amanda looked so amazing when he picked her up, Owen could hardly breathe. And he knew what the glisten meant: that it was a big date for her, too. The night was crisp. The trail was winding. They made fun of the lurking creatures, some of whom were played by kids from school. “Oh, no way,” she giggle-purred, pointing at a sheeted ghost. “I mean, even I could do better.” Kissing seemed soon, Homecoming certain. But then Brett Myers, a zombie currently, a football fucktard generally, broke character to tell Amanda she was looking fine tonight. Owen bristled. Myers was a little too emphatic, Amanda a little too flustered. And then it came: the moment that would haunt Owen for years…

With a cliffhanger like that, how could you NOT find out how this tale ends? Get the rest of your read on here! 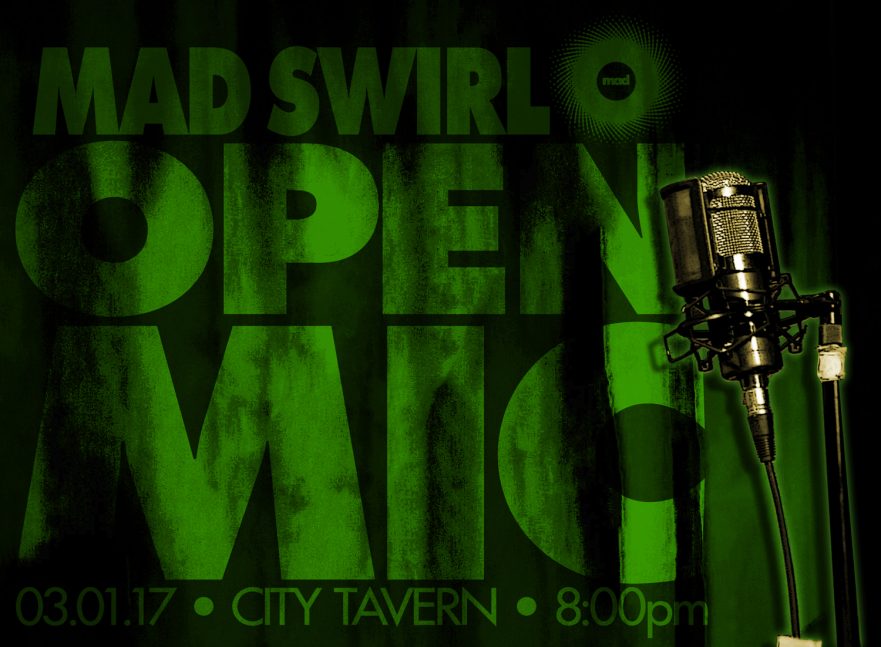 This 1st Wednesday of March (aka 03.01.17) we swirled it up madly in the live way that we do every month. This month Mad Swirl was proud to host the Dallas book release of poet Paul Sexton’s book, “Machine Of Almosting: Poems 1993-2016″

After a mad’n’jazzy set from Swirve, we opened the mic up to all you mad poets, performers and musicians. Here’s a shout out to all who graced us with their words, their songs, their divine madnesses… 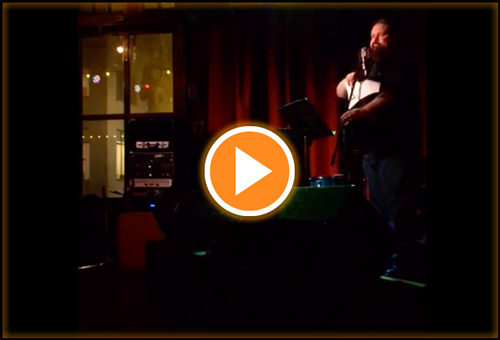 Check out the live feed of our FEATURE set. 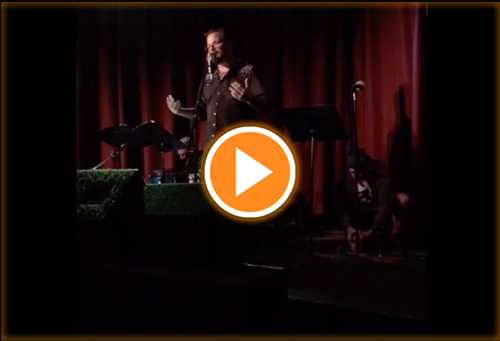 Check out the live feed of our OPEN MIC set.

Feature: Paul Sexton’s “Machine Of Almosting: Poems 1993-2016“ with performances by…

HUGE thanks to Swirve (Tamitha Curiel, Gerard Bendiks & Chris Curiel) for taking us to another dimension of time and space on the wings of their jazzy madness!