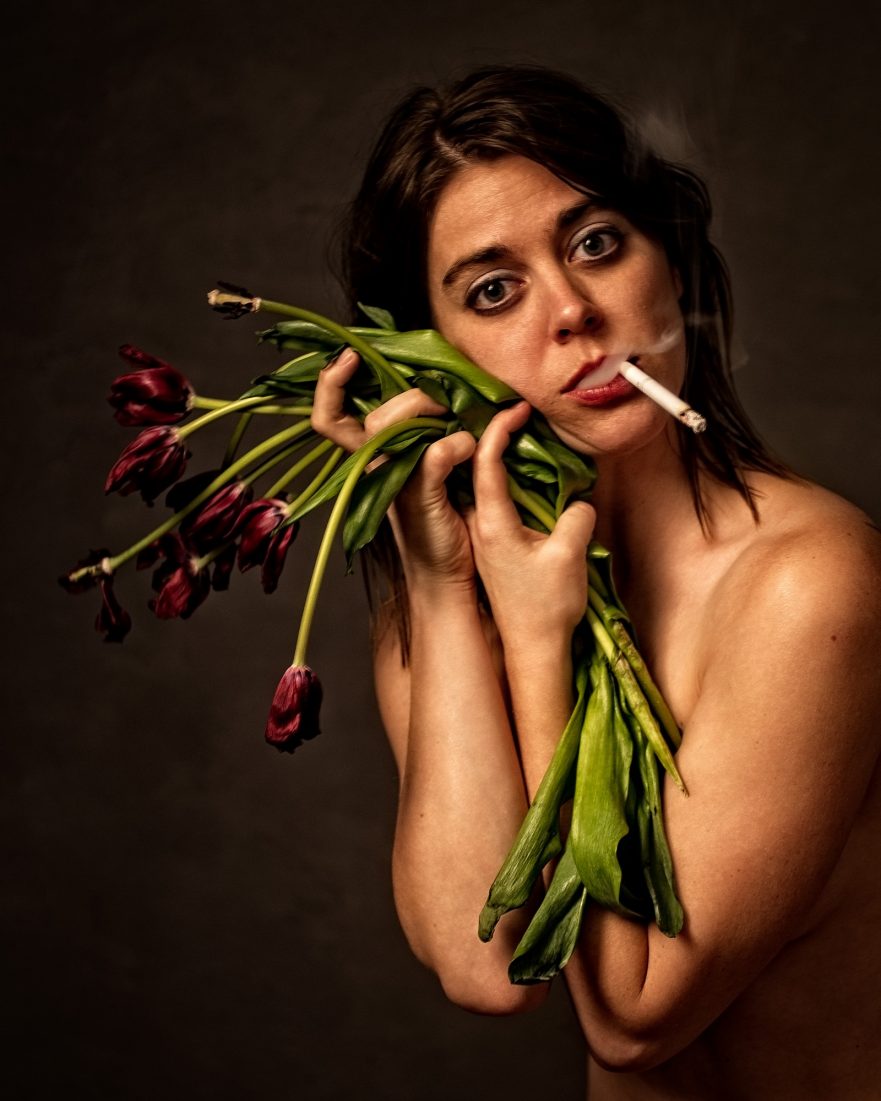 “Love Defined” (above) by featured artist William Zuback. To see more of William’s mad snaps, as well as our other featured artists, visit our Mad Gallery!

We think you may recognize our featured visual artist’s latest batch of mad photos because there’s nothing quite like what William Zuback brings. Either way, whether you’ve seen his work before or not, you’re sure in for a treat! Looking at Zuback’s visionary work almost instantly plants you in some other world – one with with naked, tattooed bodies that you’d find in the deep, dreamy crevices of your imagination. There’s no doubt Zuback’s photography is dark – but all the while, there is something so wonderfully whimsical that we have trouble breaking our gaze. Something about his work leaves us feeling like it may be a different experience for everyone, though, and THAT’s what we here at Mad Swirl love about Zuback’s work the most. It’s intangible and inscrutable with just a hint absolute madness. That’s just our opinion, we’ll leave the verdict up to your interpretation and imagination. ~ Madelyn Olson

This last week in Mad Swirl’s Poetry Forum… we quibbled with a quandary; we spiked a nog in nostalgic fog; we named what’s noble in a forest of trees; we window shopped for a deity deal; we sweated spell in search of Noel; we succumbed to the seasonal circus (lights, years, blinking); we trimmed a tree in memories. ‘Tis the season… ~ MH Clay

refuge on green altar
from who ?
from where ?
a tree in my living room
shooting roots in dread
till I drag its corpse
through my heart’s chambers
dried hopes still clung to its stiff needles
and drop it at life’s curb
I look at the empty space a tree had been placed
already envision a new one there
was that boredom that sparkled
on its new fresh scent?

editors note: It’s not the space it occupies in our home, it’s just a tree after all; but, the space in our hearts… – mh clay

How to know it isn’t a dream by Francesca Castaño

All the symptoms of the season
Are around: smiling lights like
Angelic emoticons blinking-

Why worry? The woolen socks
look comfortable and the couch
safe and right as I eagerly sink in

Optics interconnected, the hand
the world, this audible circus we’re
part of… and years lasts seconds.

editors note: Even when we think we know, we blink at years before we go. – mh clay

August in Croatia by David Subacchi

We land at Dubrovnik airport
Unfolded wheels scraping tarmac
Rumbling a welcome in the heat.

The pilot’s Manchester accent
Wishes us happy holidays
He sounds too young to fly jet planes.

For the destruction that took place
In the war for independence
And for precious lives extinguished.

But most things have now been repaired
So tourists are not embarrassed
And can spend their money safely.

We gaze down from fortress like walls
The pleasure boats plying their trade
Give no hint of what occurred here.

Only the endless walking tours
Uncover the true history
That refuses to be disguised.

How Much Is That God in the Window? by Scott Thomas Outlar

I stared straight into the eyes
of Jesus Christ
through the side window
of a Mormon church
several years ago
during the early a.m. hours
on a cold, blustery, winter
morning in December
somewhere outside the suburbs
of Atlanta, GA.

Now maybe it was all due
to the cheap bottle of whiskey
I’d quickly consumed
to drown my liver
while absorbing the vitriolic wisdom
from a Doug Stanhope comedy special
before taking my drunken sojourn
through the city,
but I’m fairly sure
that J.C. sent
a synchronized smile
imbued with the Holy Spirit Vibration
back in my direction.

Years prior to that,
I met the Easter Bunny
at the bottom of a rabbit hole
I used to frequent
where I eventually wound up
losing much of my mind.
Well, hell,
come to think of it
that might help to explain
the earlier part of this story.

I still chase after Cupid
each new Valentine’s Day,
struggling to steal
one of those damn arrows
he refuses to shoot my way.
But that, of course,
is a tale for another time…

editors note: It’s a merry mindf**k, all the way to grandma’s house (our your local religious institution). Jingle the bells in your belfries! – mh clay

But here, a squeezed corner
of penned trees
Douglas, Noble Fir
captive, owned until
the agreed passing of coins
this chain-link Christmas

at a murderous price

editors note: Which is noble? Tree for a season? Or, Bird, to bloom always? – mh clay

Tonight, my roommates and I will drink eggnog – spiked with rum and
whiskey – and we will put up our Christmas tree.

All day I’ve been trying to remember where my childhood ornaments are.

I can’t stop trying to figure it out.

In that same way,
I cling to the memories,
Something in my heart always aches about the holidays.

But tonight, my roommates and I will drink eggnog – spiked with rum
and whiskey – and we will put up our Christmas tree.

I’ve never been able to handle lifes’ changes like a well-adjusted adult,
But I put on a good front.
Most of the time.

I ache – tender, in the way that I ache – for moments in time,
Things the way they were, not are.
A gross cycle because I wind up berating myself
For always clinging to that which no longer exists.

My family and I – some other Christmas – putting up our Christmas tree.

The holidays remind me of the moments
I used to exist in but never reflected on because
I was too young to understand the aches and pains of nostalgia.
Still, I bet I don’t know the least of it.

So tonight, my roommates and I will drink eggnog – spiked with rum and
whiskey – and we will put up our Christmas tree.

I will try to be present.
I will likely forget.

In that same way, I’ll exist on, drift further,
Misplacing memories somewhere between then
And now,
But they’re somewhere,
And I don’t know if I will ever stop trying to figure it out.

But I do know, I like drinking eggnog – spiked with rum and whiskey

editors note: Ornament as memory; nostalgia for Noel. (This one is from our Mad Gallery editor. Thanks for this holiday splash – of eggnog, Madelyn!) – mh clay

In the beginning
There was god…

Man likes answers
Likes invention
There’s the devil in our dogma
In our absolutes, oppression

So, why not a handshake?
A kind word?
Yes, this season manipulates merry
Into goods, for the good of commerce
Which is, of course, good for all

But, let’s make it what we want
Wonder
Welcome
Warm wishes

An elf, a reindeer and a rastafarian
Walk into a bar
The bartender says,
“We don’t serve reindeer in here!”
The rasta says,
“Dat’s OK, Mon! I’m not hungry.”

“You don’t know what it’s like,” says the elf.
“We work ‘round the clock for no pay.
Santa says we should be happy with the knowledge
That we are bringing joy to all those children.
Well, I got lots of joy,
But, you’re gonna have to buy the drinks,
Cuz I’m broke.”

The rasta says, “Wow, Mon!
I thought you elf types were rich, rich, rich.
Santa don’t pay you?”
The elf says,
“Santa may be jolly, but he’s a cheap bastard.”

The reindeer says nothing,
Because reindeer can’t talk.

That would be ridiculous.

editors note: ’tis the season to give ’til it hurts. But it doesn’t have to be? Can you imagine putting bows and ribbons on homogenous happiness and harmony and calling them gifts? Yep, I can too. Thanks for the cockle warming, MH! ~ johnny o

Need-a-Read? We got just what you need, wrapped up nicely and ready to read.

In keeping with the spirit of this week’s ho-ho-holiday themed poetry, we are featuring “Merry Marshmallowed Memories” from Mad Swirl’s Chief Editor Johnny Olson. Here’s what Short Story Editor Tyler Malone had to say about this trip down memory lane:

“It’s that Mad season again, and let us play in the Swirl like children with our tongues out, ready for the skies to bless us with memories.”

And here’s a lil slip down memory lane to get you goin’: 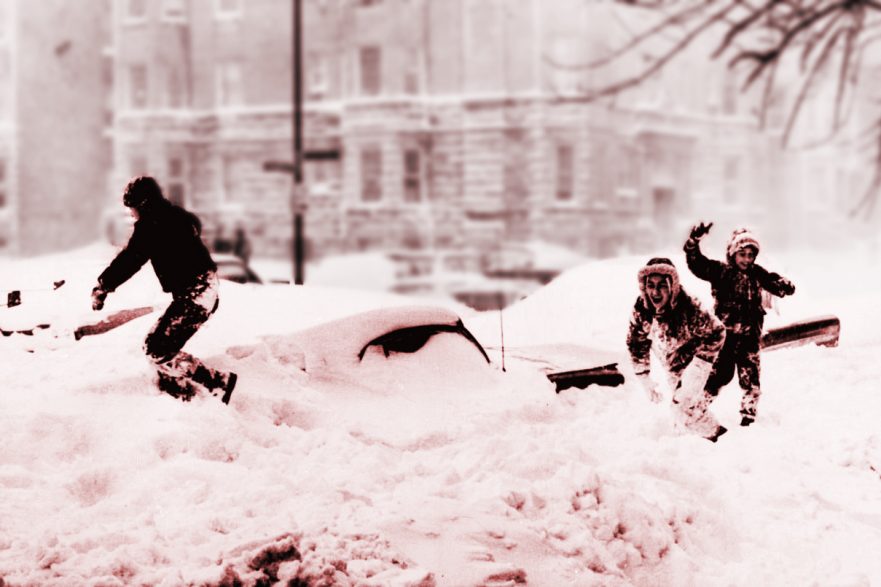 ’twas 1978, early morn on the eve of all Eves, snow came crashing in waves of big fat flakes that blasted our dingy urban world in a blanket of white wintry innocence. As I recall decades later, with nostalgic-tinted glasses, the mundane neighborhood landscape seemed to turn magical as I looked out the fogged-up windows and saw this dream scene. Within minutes I was bundled up head to toe in a half dozen layers of clothes leaving only my eyes and nose exposed. A merry mummy I be as me and my friends ran out to greet this blizzardy scene…

Slide on thru the rest of this merry memory right here.