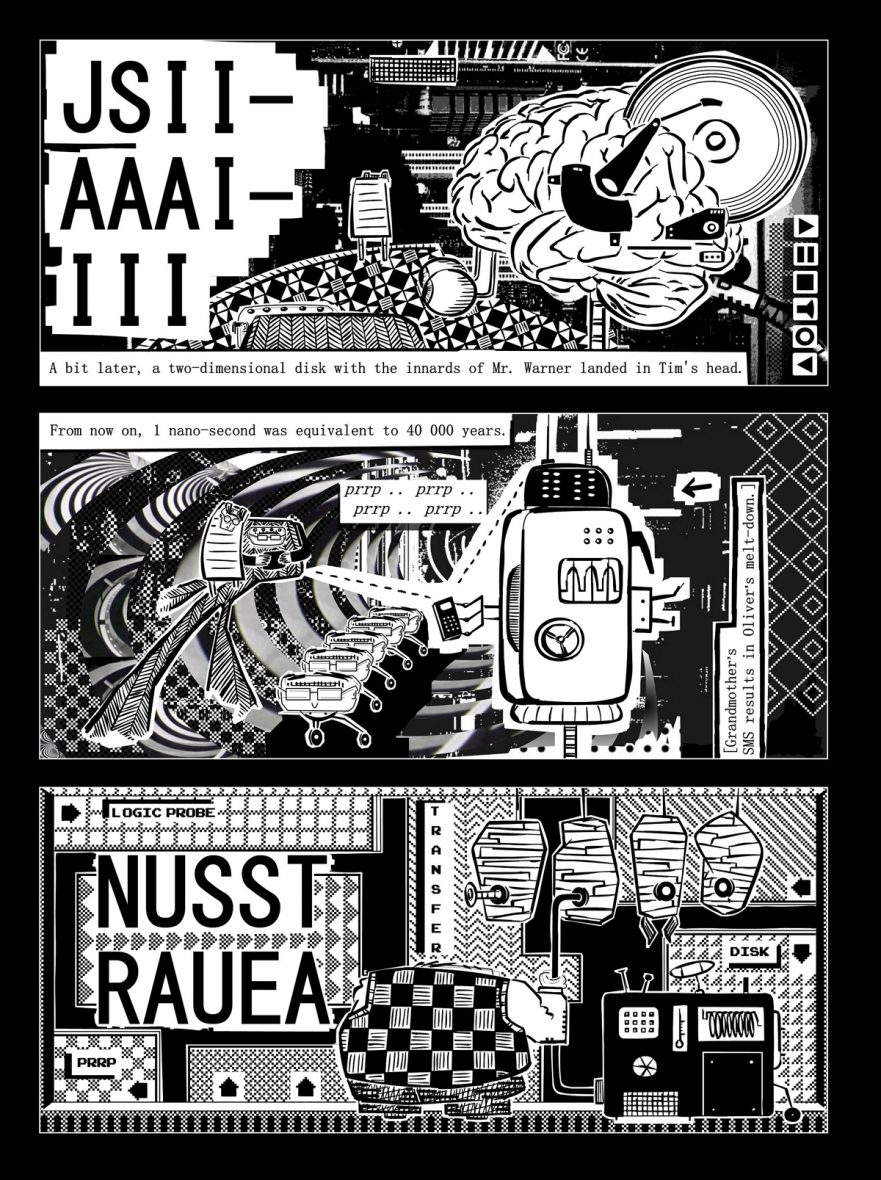 “Mr. Warner: 3” (above) by featured artist(s) Daniel Ableev & Bob Schroder. To see more of Daniel & Bob’s mad ‘toons, as well as our other featured artists, visit our mad Gallery at MadSwirl.com!

This last week in Mad Swirl’s Poetry Forum… we looked for the where of a place not there; we lost some more from desperate shores; we blocked out war on the dance floor; we gave up will for no good, and still; we burned up the profit in prophecy; we shook out the water for the glow; we felized navidad for the show. Everyone different, everyone the same. Seasons greetings in any name. ~ MH Clay

Pedro swings a mop all night
on the 30th floor of Castle Towers
just off Michigan Avenue
not far from the foaming Lake.
The floor is his, all his,
to swab and wax till dawn.

The sun comes up and Pedro’s
on the subway snoring,
roaring home to a plate
of huevos rancheros,
six eggs swimming
in a lake of salsa verde,
hot tortillas stacked
beside them.

After breakfast,
Pedro writes a poem
for Esperanza,
the wife who waits
in Nuevo Leon.
He mails the poem
that night, going back
to his bucket and mop.

Pedro’s proud
of three small sons,
soccer stars
in the making.
On Christmas Eve
the boys wait up
in Nuevo Leon
and peek out the window.
Papa’s coming home
for Christmas!

Pedro arrives at midnight
on a neighbor’s donkey,
laughing beneath
a giant sombrero.
He has a red serape
over his shoulder,
and he’s juggling
sacks of gifts.

When the donkey stops,
the boys dash out and clap
and dance in circles.
Esperanza stands
in the doorway
and sings
Feliz Navidad.

editors note: This Santa is no holiday concoction; he arrives with gifts and laughter for real. Feliz Navidad! – mh clay

Feel Me? by Daniel Kuriakose

The falafel joint jets out on the block,
like a marked card.
This guy, with his tie dyed attitude,
struts to the joint,
meets eyes with another guy
he hasn’t seen lately.

They clasp each other’s hands
by the finger joints
and Tie Dye, with the joint problems,
winces as they pull in, to bump
shoulders, in a semi-orbit,
like two galaxies who’ve gotten too close.

Tie Dye shakes the city out his ears,
the way physical contact is a lubricant
to undo isolation crusting over itself,

the way you say “let’s blow this joint,”
to your life, all of it, out his ears.
He looks up and explains the river
flooding his canal:

“Know how the ocean glows sometimes,
’cause all the bioluminescent algae,
how they try to touch,
but glow instead?”

… Whoever’s prophet material
Had best seek counsel
From the nation
Of ‘The Northern Lights’:

“Where man ends
The flame begins” *

And we will never
Put Prague
Or Jan Palach
Back together, again.

To Shoot Up with Regrets by James Robert Rudolph

Songbirds start forming circles
in a roughening sky there’s trouble ahead
dust devils careen and clone
gritty, pitting, stinging in their spin
a mange-ing cat wet hisses at a
far off siren and something’s on its way.

A bony doorman invites me
into a brothel he has no teeth and smells
of damp onions air static as a bell jar’s holds
sexual squeaks and bathroom sounds in
a soupy suspension and nothing nothing good
can come of this.

I eye fresh sutures closing the gap
on my forearm and if I don’t watch myself
I’ll unlace my arm like a corset and infection
will redden my skin like an algae bloom
a red tide and I tell myself don’t go there.

I know lost weekends and the poking horns
of no good devils and setbacks and how
none of it’s worth it and still.

Stripes, squares, planes and angles
lots of stripes, black pinstripes, but not Sergeants’ stripes.
Parallel lines and black and white squares
but no squares on the dance floor, undulating.
Music from the speakers blasting pulsing electric vibes
and as they begin to move, subtly,
twist but don’t shout, hands expressive,
self-expression without judgment,
their own music-the Mods-their lives are all
about fashion and all about the thumping beat.
Dance floors are so crowded with bodies
moving in place, eyes closed experiencing rhythms
heard with their unique ears. They weave and
bounce but keep the attitude cool, girls with hair with bangs,
but not the bangs of escalating war
in some foreign land. Boys with hair
grown to length, hanging over collars,
sharp collars that for some will be replaced with drab green.
Clothes not funereal, surprisingly,
not drab checkerboard patterns dazzling the eye, something
so colorful about this dress worn by
kids who had yet to discover hip,
those for whom video was all in the head.

editors note: Delight on the disco floor, oblivious to the beat of war. – mh clay

The list goes on.
Cry me out a layer
thick and salty
crusted crystal.
Digging beneath walls
like Berlin. And I am east,
so far east.
Hiding in hollowed out car seats,
deplumed and desperate.
Save me from razor blade
wired fence, made of mind
and kind. Thrashing aside
long boat river bullets
running.
Bloated and blind
drifting to the bitter Atlantic.
Weeping at the roll call.

editors note: Names not called; nowhere to go when the last doors close. (We welcome D.A. to our crazy congress of Contributing Poets with this submission. Read more of her madness on her new page – check it out.) – mh clay

Apartment 4-C is missing
The girl in 4-B has never heard
Anyone pounding on the wall
When she’s playing her disco
Station, has never detected
The smell of boiling cabbage or
Reheated Thai food, has not
Been awakened at 4 AM by someone
Sneaking out with her pumps
In her hand or shambling off
To some horrible shift at Con Ed. The
Old couple in 4-D remember a TV
Set on the other side of the
Bedroom wall, people laughing
At some joke they couldn’t hear
Some joke in black-and-white
Somebody wearing a wide tie and
A bad toupee, they are almost
Certain. It was a long ways back
But apartment 4-C was definitely
Not missing then, and the people
In there made popcorn all the time.
The guy in 5-C dropped a bowling
Ball the night after the girl in
4-B told him apartment 4-C was
Missing, slipped a note under the door
Of 4-C that said i banged yr grlfrnd
& then a couple days later another
One that said just messin wth u, dude
Looked through the key hole but
There was a metal plate screwed over
It, or anyway he couldn’t see anything,
He decided yeah, 4-C is in the wind.
The crazy lady in 3-C says sometimes
Apartment 4-C is overhead, but
Other times it is underneath, where
2-C is supposed to be. Once the doors
Of the N train opened up & instead
Of the Union Square station it was
Apartment 4-C. It’s possible although
She won’t swear to it that one
Night she woke up to use the bathroom
& she was in apartment 4-C, but she
Was in her own bed when she got up
In the morning. What was apartment 4-C
Like? asked the girl in 4-B. O honey
Said the crazy lady, don’t get me
Started, I shiver just thinking
About it, just be glad the
Goddamn place is missing.

editors note: Mr. Serling told us, “There is a fifth dimension beyond that which is known to man. It is a dimension as vast as space and as timeless as infinity. It is the middle ground between light and shadow, between science and superstition, and it lies between…” us and Apartment 4-C. Beware! – mh clay

This week’s featured short story at Mad Swirl, “The Wicked One” comes from Chris Minton . Here’s what short story editor Tyler Malone has to say about it:

“Just when you think you’ve quit the carnival, it moves next door. Lions, terror, horror, when laughter corrodes to screams, it’s all so close, and all there for you. Shut your eyes and breathe it all in.” 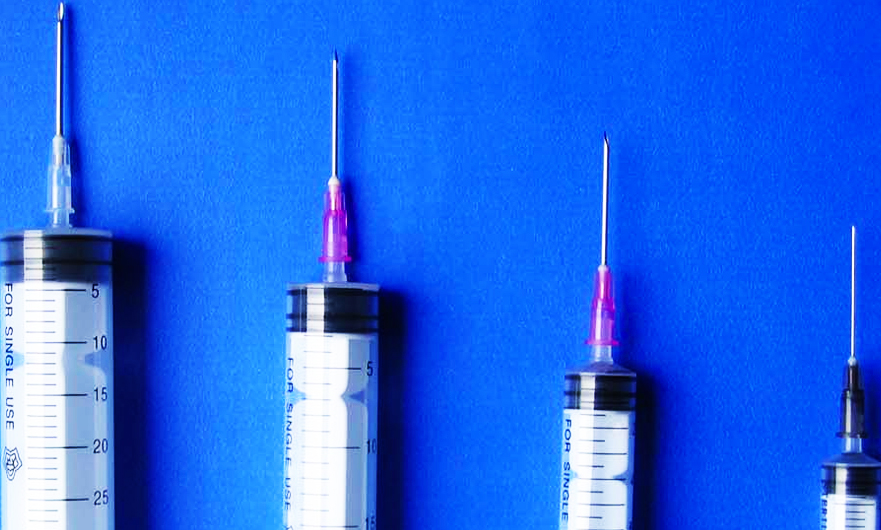 She closed the door and, through the peep hole, watched him walk down the hall to the elevator as his semen leaked from between her legs and pooled in her underpants. As soon as he had disappeared from sight, she pressed her forehead against the door and began to quietly cry. From behind her came a familiar voice.

She began to cry harder.

She shook her head, flinging tears on the threadbare carpet below.

“That’s not nice after all I’ve done for you.”

“Leave me alone,” she croaked. The words felt distant and translucent, as if uttered by someone else and intended for an age long since passed. They scattered helplessly on the floor around her.

“You don’t really mean that. I can tell.”

Her knees gave out under the weight of the truth and she crumpled to the floor. Minutes passed, the only sound—low and guttural, dripping with shame and disease—emanated from the place within her where memories are permanently and unforgivingly emblazoned. 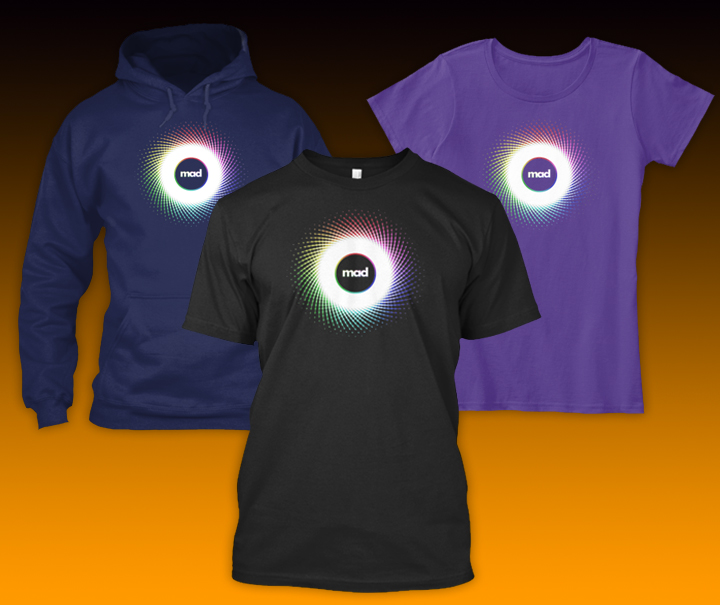 If you’re MAD and you know it, why not wear it loudly and proudly? The whole Mad Swirl of merch begins here, in our online store! If you haven’t already got yourself some “mad” clothing to sport, then you’ve come to the right place.

This merch will be available for the holidaze if you buy before December 15th. They come in all sizes for men and woman and a variety of colors. Come get you some and while you’re at it, why not get one for the whole fam?! 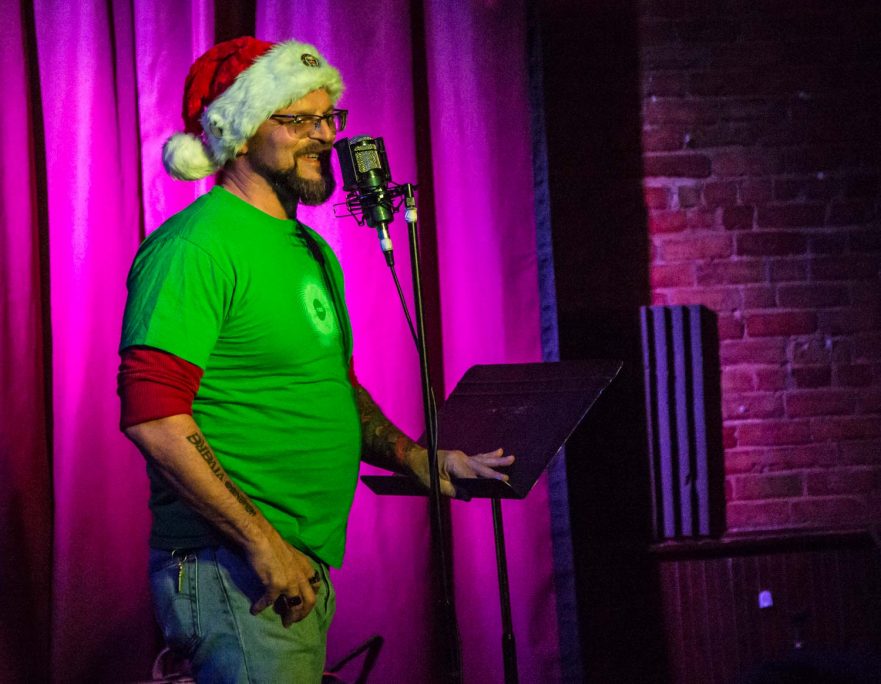 (photos courtesy of Dan “the man” Rodriguez. To see all of ’em visit our Mad Swirl Flickr page!)

’t’was the season for some Holiday Hijinx and a perfect reason for all the Mad girls and boys to Swirl up some noise! They all brought their holiday hoots and howls together to swirlebrate the whole spectrum of expression this time of year invokes. It’s was all you, all us, all together in our Mad Holiday Hijinx Swirl-ebration!

HUGE thanks to Gerard Bendiks & Ed McMahon for taking us to another dimension of time and space on the wings of their jazzy madness!

Thanks to The City Tavern’s proprietor Joshua Florence for blessing us with our new digs and welcoming us mad ones with open arms and giving us a swirl’n space we can call home.