“Thus, the poet’s word is beginning to strike forcefully upon the hearts of all men…” ~ Salvatore Quasimodo 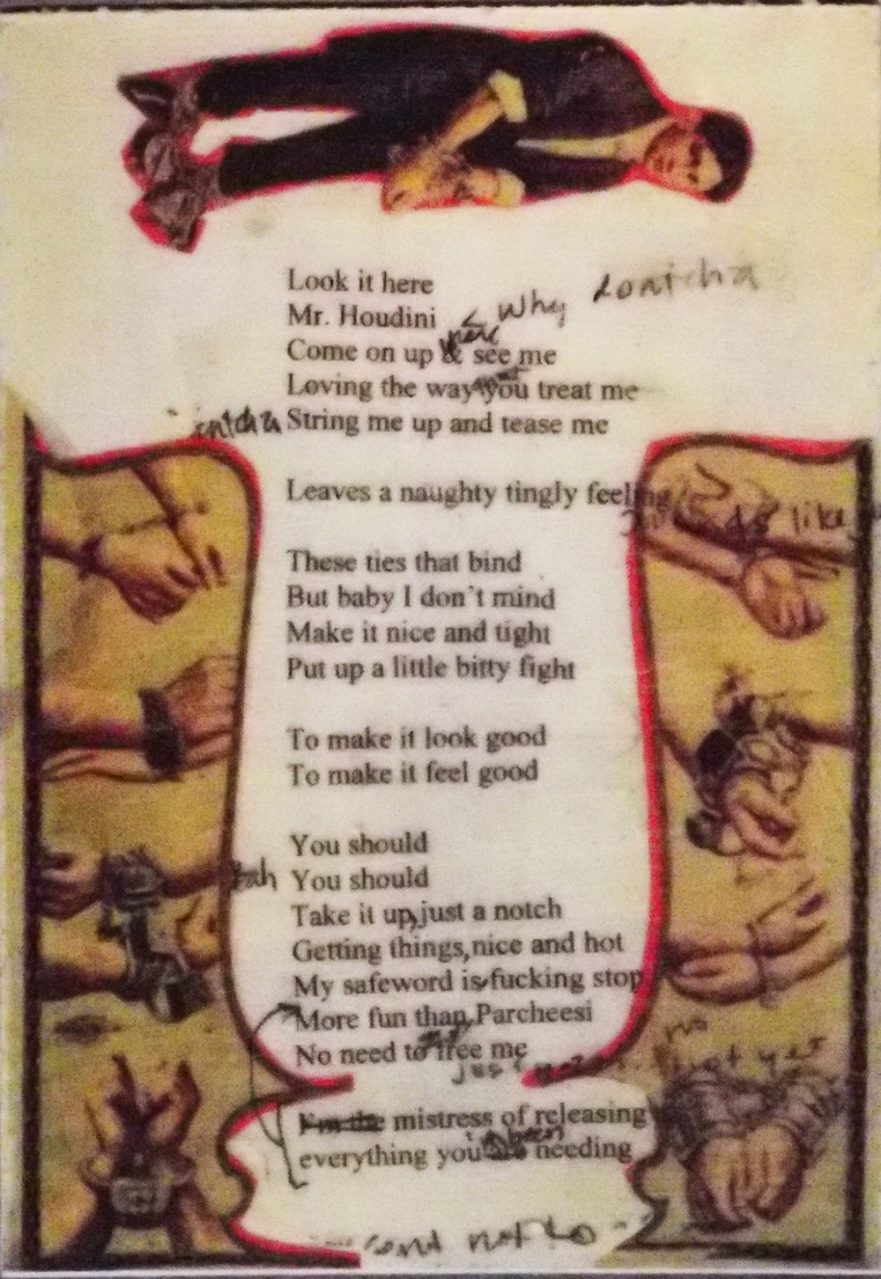 (click here to to hear the accompanying track to this piece)

“Houdini” (above) by featured artist Suza Kanon. To see more of Suza’s mad canvases, as well as our other featured artists, visit our mad Gallery at MadSwirl.com!

This last week in Mad Swirl’s Poetry Forum… we flew the coup for a bird’s nest soup; we griped and groused o’er the odds of the house; we marked a mundane story of life in purgatory; we ran real-estate life with a styrofoam wife; we copped to a post-coital deconstruction; we filled a hole with forbidden fruit; we wrapped our world with a bonnie girl; we neared Nirvana nearly well, seeking sanctuary to Get Out Of Hell. Near perfection, perfectly near. ~ MH Clay

My Quan Yin appears both as a sparrow
and a mockingbird.

Morning’s acolytes speed away from me
wearing bright colors and the latest running shoes.

If I gave you my Get Out Of Hell Free card,
would you give me your veteran’s burial right

so I may rest eternally under the sycamore shade
of Antietam’s national cemetery?

By now the coyotes have dragged
last night’s white tail deer road kill into the wood,

so you may exit the house without witness
of that particular mechanized savagery.

Even the worst part of me loves you,
forgives you, for the oblique issues we howled last night,

each of us too lone wolf under a full moon
to hear the hunger and loneliness deep in our bodies.

The worst part of you, takes my Cubs hat
and wears it to keep your hair out of your eyes

as you work on the pickup truck’s engine
or on a walk in the rain that inspired Noah’s toil.

Totally insane
to be normal in these times of
turmoil you say with a lisp as
crisp as a cut-glass vase.

Bringing life to the graveside of
horizontal fools, where
I take your hand, dance upon the
twice dead, content to be
unsettled, while settling for
unnatural immortality.

editors note: The perfect mate with whom to navigate this graveyard life. – mh clay

For Lily In The Garden by Guest Poet Jack D. Harvey

If one apple
were eaten

how a skin
has a sweet life

how a depth reached
leaves a hole.

Coffee is pooling under the coffee maker
with little bits of grind like ants swimming
around. It’s been leaking for weeks while

I ignored it as I’m trying to do you.
My life, too, is spilling out around the edges.
I try to contain its dark liquid, try to maintain

my balance on the high wire in my head
whirring with chirping birds flying
in a frenzy, wings batting and tiny bones snapping.

Every day a little bit more of something seeps out,
every night I wipe it into my sleep,
holding it behind tightly closed eyes, willing

it down deep where light is swallowed.
But every sunrise it’s back, pushing through
cracks, birds swooping and ants crawling

in the seepage. Another day, another potful
of crazy, another push of the lava swell of lies
down my throat swimming
in a bellyful of you.

He is up each morning
the real-estate developer
building sandcastles on the beach below
with a purple pail and a yellow plastic shovel
his work tools, the tools of his trade
and halfway out the front door
on his way to work
he stops to kiss a hat rack with a styrofoam head
on the cheek
(his wife of many years)
before taking the elevator
down.

editors note: Maybe he will run for president… or king. – mh clay

He comes home and she circles around him
Rubbing the pain into the wound
Have you eaten, was it nice
Did the car drive well
Monosyllables or no syllables
The stare straight ahead
The slight nod
And she stops talking.
Flow of air
Motes of sun
The snap and hiss of the open beer cap.
The evening begins.
The tv crackles on, it’s the bottom of the fifth
Bases loaded but lots of time to play
As he slowly eases down
And pries off his shoes.
The couch
The beer
The game
goes on.

I throw money at the slots,
The casinos,
Trying to make an honest income
But it doesn’t stick
Nothing does
I say to the machine,
“Come on, give me something,
I need it, for my wife and kids”
I savour my beer
And smoke my cigarettes
I put one out
And light another
And try some more
But it doesn’t budge
Some irritating man
Parks his behind
In the chair next to me
And starts watching me
Trying to gauge
If I’m winning or not
And he ruins my buzz
Altogether
I don’t like people
And now there’s a person
Right next to me
Too close for comfort
I hear him breathing
And I’m put off
I go from winning to losing
Going down
And going up again
To feeding money
And getting nothing back
Eventually I get up
And leave
The irritating man
Immediately sits at my machine,
Shoves some notes in
And boom
He wins
The jackpot
Either way
The penny drops
It’s my loss…

SWIFTS ARE MAD BIRDS by Guest Poet David A. Thompson

But – humans are even madder
Who eat swift spit, mud and insect carcass

And call it birds nest soup

Who Needs-a-Read? You, that’s who! And we here at Mad Swirl have got quite the read to fit your need… “Who’s Who” by Contributing Writer John Lewis!

“The world’s a small town and you never know who’s on top of who no matter how well you think you’re on top of them.”

Here’s a few lines from “Who’s Who” for you you’s: 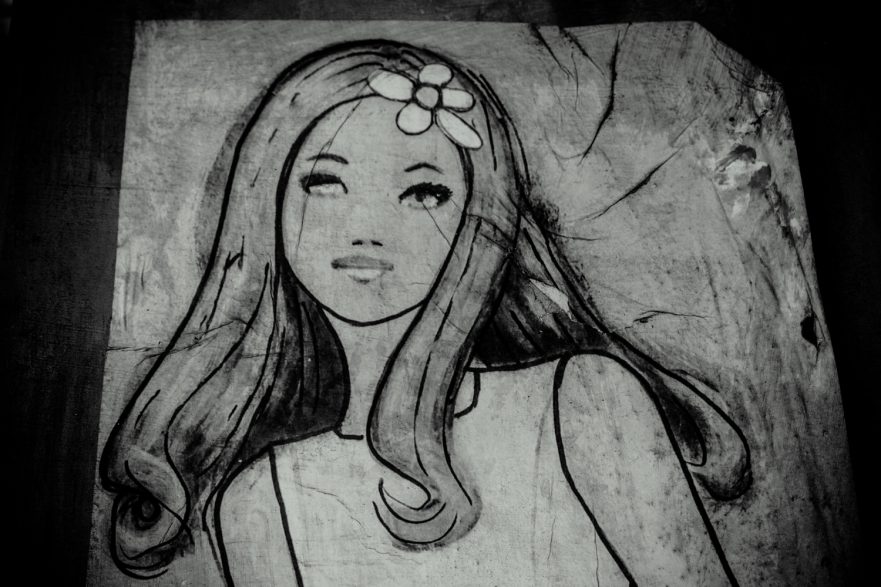 (photo “A Nobody” (below) by Tyler Malone aka The Second Shooter)

Mr L.K.J. Portland was in shock. He couldn’t put his finger of what he’d done wrong. Well, to be truthful, he had done wrong—he’d taken an illegal turn and collided with an old car driven by a young woman. A nobody. That was what troubled Mr. Portland. The nobody was but a fly yet she stood her ground when he swatted her. Who did this Akeela Banks think she was?

L.K.J. Portland or Port as he was popularly known to the rich who dwelled above the law knew this little incident seemed to be getting out of hand.

Miss Banks had challenged the accuracy of the accident report given by the police which transferred the fault from Mr Portland to Miss Banks—from the affluent to the working class. The absence of a lawyer at her side was further cause for Port’s disgust. He felt that his credentials deserved much better. In the past had he not won in the face of greater odds? Port knew he did.

He had his lawyers mail his demand for repair costs to his top model car but the nobody Akeela Banks insisted that it was he who must repair her car because he was at fault in every respect. The next thing that angered Port was a call from the magistrate who asked in a feminine but assertive voice him to drop the case. The magistrate, in her off-the-record conversation, knew that Port was using the law as a ship to satisfy his ego. What does this bitch know? thought Port…

Who wants some more of “Who’s Who”? You do, that’s who! Get the rest of your read on here!