“Nobody is ordinary if you know where to look.” ~ Maeve Binchy 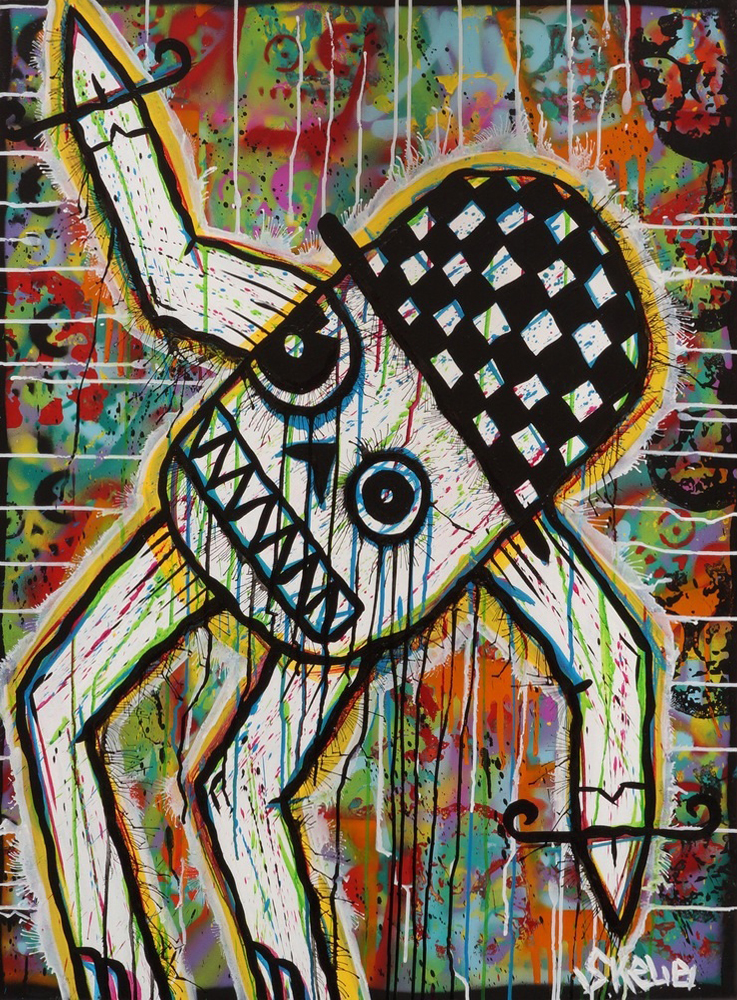 “battle beast” (above) by featured artist Jeff Skele Sheely. To view more of Jeff’s twisted beatific images, as well as our other featured artists, visit our Gallery at MadSwirl.com!

This last week in Mad Swirl’s Poetry Forum… we raised a bud from remembered mud; we struggled to rise above the ranks of those who run on shallow tanks; we sought to curb what anger grows with tips o’ the brims of our chapeaux; we listened to what one had to say about the good ole American (Everywhere) Way; we sliced a thin salvation with sharp instruments for sale; we danced aloft with kissing bees in a tree, leaf & nub tickling, riffing breeze; we climbed a staircase, skyward hung, strained to hold on – ring, rang, rung; we embraced a hallucination, clinically not allowed, tranquility found in blood from clouds. Just another week’s work in the Swirl… ~ MH Clay

Time to Reflect by Tom Hall

My first hallucination was the perfect one for me.
I had walked deep into the woods when rain began to fall
It fell so softly bending trees and rustling through the trees
The rain drops shone like blood red beads, descending on us all.

These colored drops turned colorless, following their falling.
The most relieving thing was that it painted nothing red.
To bathe the forest and myself in blood would be appalling.
The colored of the world remained, only the clouds had bled.

It was a warm and welcome thing, the rain had been to me.
I laid upon a massive rock, to let it wet me down.
And then it stopped, as rain will do, the sky had set it free.
I’d had my fill of ambrosia, there was no need to drown.

My Psych took back the pills next day, he had no way of knowing
That sanity is subjective, he’d got my engines going.

The Fish Ladder at Diamond Hill by D. Russel Micnhimer

Late morning breezes riff the vines and
branches, playing hide and seek with small
promises tucked beneath wide open
leaves. Beside weathered fence slats, yellow
winks along cucumbers and squash vines that
trail down from well-composted mounds. Their
open sweetness imbibes the bees’ probes
and kisses. Pale green and pencil thin,
pears dangle beneath perky leaves set
to start long itineraries toward
ripeness. Fig nubs stand, beneath dark green
umbrellas, erect and hard. Neither
rhyming nor reasoning, breezes riff
streaks of movement down and up each tree.

I
I can’t stop buying scissors. I walk into Home Depot for red geraniums, leave with gardening shears, green ergonomic handles. Piggly Wiggly for a roasting hen. Shiny poultry shears. At a garage sale I find a pair of hedge clippers. By December paper cutters, pinking shears, hair trimmers — any blades you want are boxed in the kitchen pantry.

II
Saturday he takes his 14 clubs & disappears. In hot water, I clean scissors. Prop them on the counter before drying with muslin. Each blade I shine with baking soda. In high school I hung with cutters. They used whatever worked — broken glass, coat hangers, paper. Arms tracked with violet scars like stretch marks hidden under long-sleeve shirts.

III
Reflections in a Golden Eye: Mrs. Langdon uses garden shears to clip her nipples when she loses her baby. Snip snip — easy as pinching off deadheads. Sunday in January, I hold my left nipple between the blades of barber shears. Warm steel triggers goose bumps. Is a nipple like a finger? Can they sew it back on?

IV
Recurrent dream: blades-down, scissors drop from the ceiling, rattling & hissing. Impale the cherry nightstand, down comforter, my Land’s End bathrobe. I crouch in the tub, rocking to the sound of hail. Open my thigh — blood a rusty penny melting on my tongue.

V
I get an Alabama divorce. He signs the papers & hauls his Titliest clubs, La-Z-Boy & mahogany desk down to Florida. Parting words: The cat stays with you. I keep Moot, the crystal & the condo. Start selling the scissors on E-Bay, box by box.

men in suits,
and ties,
tribal warriors,
battling for turf,
believed their own,
naïve ignorant bastards,
boundaries shift,
and borders in dispute,
fears flamed,
culture assigned,
along with taxes.

editors note: This is how we roll in the land o’ the free. How about your country? – mh clay

How to pale a red hot anger
When rods of pain stroke
And all day long it grows stranger
Beholden to stronger folk.
An anger that knows no voice
Born nor bred by choice
Leave me die in a quiet corner
Seize the day and all of that
Close your eyes insipid mourner
Remove your mask and raise your hat.

editors note: Open face, cool head; take on the after instead with laughter. – mh clay

The Struggle by Michael Marrotti

editors note: We can get’em to look, but we can’t make’em see. Alone, indeed. – mh clay

If This Finds You, I Tried by Daniel Lattimore

My sin wasn’t bigger than your sin, yet your name was driven into the mud.
We watered that seed together, and our rose, forever with its thorns, began to bud.
Why? I’m sure your friends wanted to know. I didn’t have that magazine cover smile
or that endorsed glow.
But for you it wasn’t about that. It was about the passion left to the dance floor.
That kind of raw passion that left you craving more.
I couldn’t keep a secret because I wanted them to understand
that the heart resembles blood surrounding a clenched hand.
In an alternate universe, you and I could converse.
They write ballads about criminal couples, and you and I share a verse.
Haha there I am, caught captive in my own home
Plagued by a picture of my youth hanging in the catacomb.

We’re only as good as those we wish to hold up in high regard. We’re only as safe when we worship predators and apologize for being opened and our insides explored, pulled out.

And here’s a short testimony of this tale to get you started: 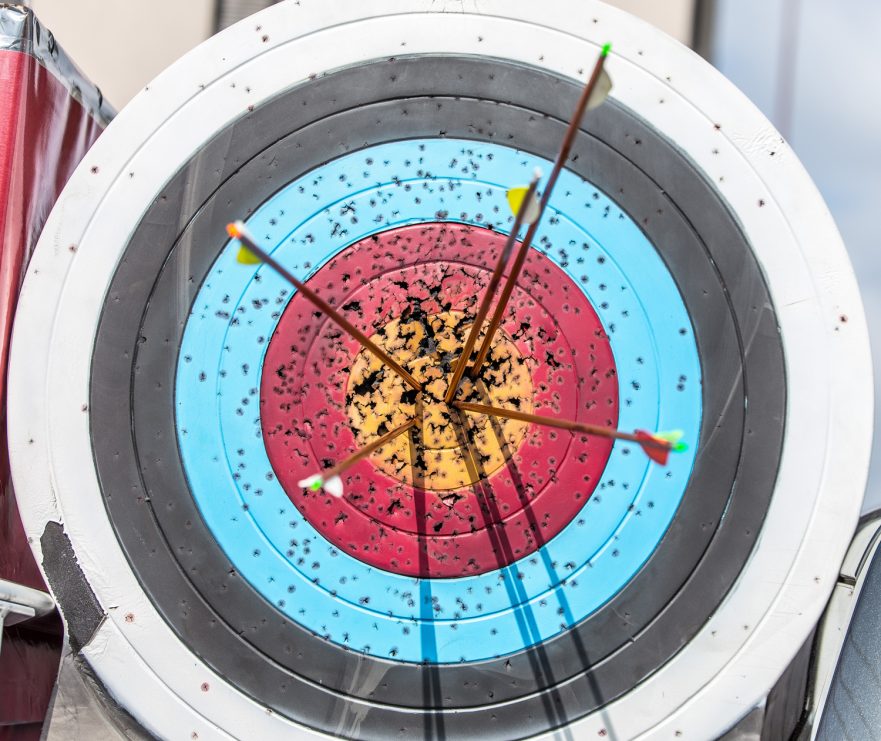 (photo by Tyler Malone aka The Second Shooter)

His business card between his fingers, he thanked her for coming down to the station, call if you think of anything, we’ll be in touch. It was like some bizzaro-world cop show where the bad guy won. The NWA song “Fuck Tha Police” started playing like a soundtrack in her mind as she walked out of the police station, shaking her head…

Gotta keep reading, don’cha? Well what are you waiting for? Get the rest of your read on here. 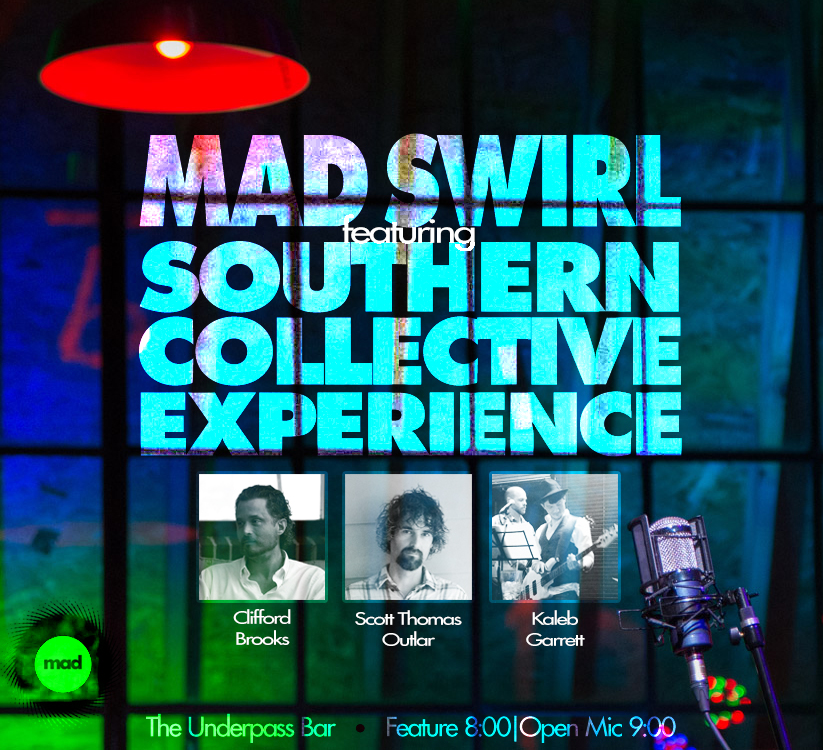 Join Mad Swirl & Swirve this 1st Wednesday of June (aka 06.01.16) at 8:00 SHARP as we continue to swirl up our mic madness at our mad mic-ness home, Dallas’ badass The Underpass!

The Southern Collective Experience is a cooperative born from all genre of life, and from every part on the nation. It is not simply a collection trapped below the Mason-Dixon Line. / Our band of virtuous heathens fly the philosophy that “everyone is south of somewhere.” All of those who share a bloodline infused with blues, feel our gravitational pull. It is life lived real. / A side-passion the SCE invests itself into breaking the stereotypes artists earned, and earn, in regards to lack of dependability, rampant emotional immaturity, and people incapable of working selflessly with other creators. / The SCE is not out to change the world. The Southern Collective Experience is a tactful force. Every genius deserves to digest the truth: You are a genius.

Come on out, one & all. Get a brainful of Swirve, share in the Mad Swirl’n festivities, & if the spirit is movin’ ya get yourself a spot on our list. Come to be a part of this collective creative love child we affectionately call Mad Swirl Open Mic. Come to participate. Come to appreciate. Come to swirl-a-brate!

P.S. If you’re on Facebook, get on the pre-list at our event page.