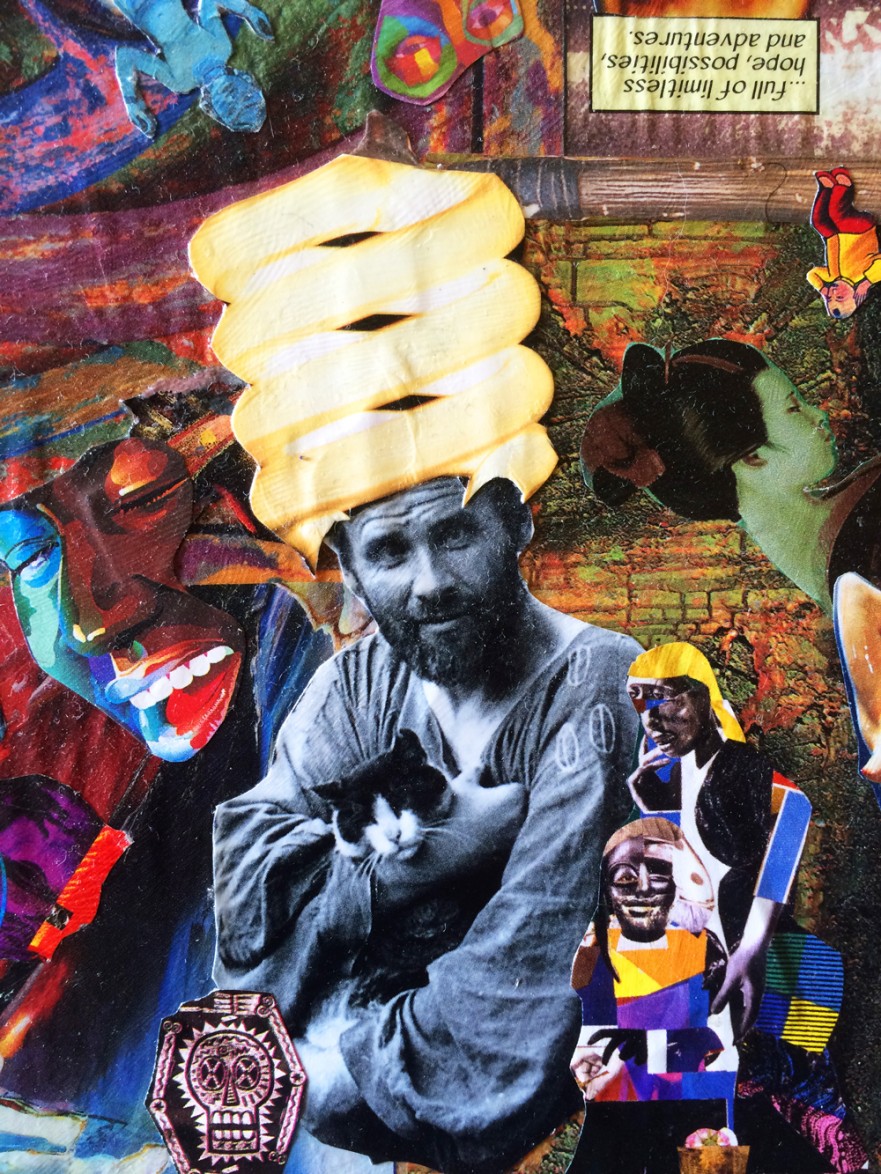 “In Lightened” (above) by featured artist Brett “BA” Ardoin. To see more Mad works from Brett, and our other contributing artists, please visit our Mad Gallery.

“Creativity is piercing the mundane to find the marvelous.” ~ Bill Moyers

This last week in Mad Swirl’s Poetry Forum… we nipped never in its blundered bud; we arrested the processional of an immigrant professional; we upheld the perdition of self-definition; we ordered universal ambivalence alphabetically; we raged at the injustice of meter winks and the drone who enforces, but never thinks; we bypassed enough to have more, then nothing; we tried to snatch now from the ultimate snatcher. Time is what we have, what we spend and what will tell in the end. ~ MH Clay

For winter’s twisted trees there is no escape.
The Earth turns, no longer at the centre,
A mere speck in the sandstorm,
The sun knowing what power is, unlike
Those under a warm comfort of snow.
Trees writhe, oblivion short lived
As the agony begins and roots stretch.
Icicles slowly die, drip by drip.
The distorted trees squirm, the thrash
Of each bud, the struggle to stay asleep.
The sun, relentless, hammers the heat
Into shape, jerks the worm from its bed,
Pulls flowers apart, rips the clouds
Wide open, summer’s tears weeping
Over leaves and sheaves of wheat
By the shade of spent trees
Buying time until autumn.

editors note: Time wrests Now from our grasps. Hold tightly or relax grip; this predator devours all. (Read another mad missive from Del on his page; a bit o’ star gazing – check it out.) – mh clay

Rapier (In Protest of Fracking)

in soft folds of belly
Womb scraped
then scrapped

tainted and splintered
take all her honey
drain her of lifeblood

Still, thrust deeper
Frack her and fuck her
Mine her and maim her

editors note: We just won’t stop until enough is all gone. (Read another mad missive from Sharon on her page about the OKC Bombing – check it out.) – mh clay

One Man cries I Am I Am
in ecstasy and terror
as the Lord cried
to Moses. Three men
decline to listen
ignoring a sensibility
behind prophesy. A nearby
parking meter winks
metallically on a lightless
street corner. Witnessing
nothing. Glittering
after dark. Stands
like a watch
-tower going senile
totteringly decadent
on duty to collect
poised to pinch
the nickels and dimes
the irrevocable fines
the regular tariffs
blind to the charges of citizenship.

editors note: Nice! Dylan said this, too, “Don’t follow leaders – Watch the parkin’ meters” (We welcome Darryl to our crazy conclave of Contributing Poets with this submission. Read more of his madness on his new page – check it out.) – mh clay

editors note: We don’t count in the universal tally? That celestial opinion amounts to zero by mine! – mh clay

I am simple
aye, I am simple
and the half of everything
can remit my ardour
I am a boat made of paper
half sunk and half lofty
and I have dreamt and dreamt
not once
of existing
and not existing
purgatorial essence
is the essence that defines me
an arch-angel
an arch-fiend
nay I am not avoiding thee
O thee who are besieging me
thee who defines faithfulness
By mere presence
and thou who shout
“what a crime
What a crime”
When someone sees beauty
In a marvel
that is half lame
and half sublime
What a nonsense!
My philosophy is not thine
I am my own definition
I am mine
I am mine

woman in her parlor.
legs pressed together,
arms folded

framed document on the wall,
a degree in dentistry

speaks with a thick accent,
reads newspapers in Croatian

she wants to practice but can’t get certified,
so she cleans hotel rooms,
up before dawn,
tired by midday

her eyes are red with bloody dust,
her hands are gravel rough

any more sitting, thinking,
and she’d be tight and thin
and hard as a drill-bit

so sometimes,
she sits before the mirror,
tilts her head back,
tells herself to open wide

editors note: We don’t make it easy here. Getting that job pulling teeth can be harder than pulling teeth. – mh clay

Your need
Is my need
Is not
Our need
Or not need now
If ever
No
I can’t say never
Was it you
I thought I knew?
All that murk
We blundered through –
Youth, inexperience, no common language,
Adrift in seas of unplumbable depth –
And now, on the shore,
I take step after step.
Don’t look back, I think.
What was, is not.
And yet,
I can’t forget
What might never have been.

Need-a-Read? Do you need a read really baa-aa-aa-d? As long as you’re not kidding us right now, we got just the one that will get your goat!

Here is what Short Story Editor Tyler Malone had to say about this pick-of-the-week tale ”Getting My Goat” by Contributing Writer & Poet, Harley White: “Sometimes, love is b-a-a-a-a-a-a-d, but sometimes the mess is just what we need.”

Here’s a taste to tease you with: 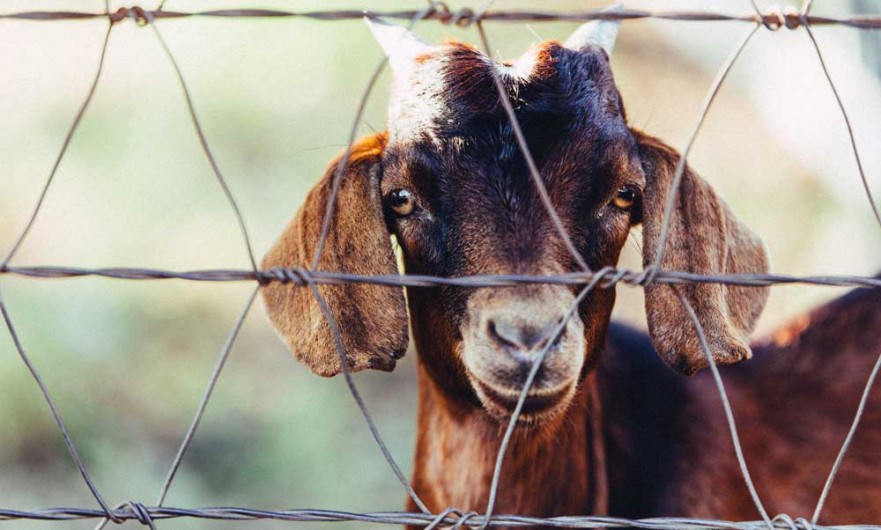 Long ago I had the bittersweet pleasure of briefly sharing my domicile with an unforgettable being. I had cohabited with cats all my life, yet I never would have envisioned myself the owner of a goat. The word owner doesn’t exactly apply. Not regarding these recalcitrant ruminants. Nor perhaps is it valid for any living creature, unruly or otherwise. Whatever the case, no one really owned Gilbert, apart from himself.

“The Americanism ‘to get one’s goat’ means to reduce a person to frustration and rage,” as well as “to annoy to the point of provoking an action or outburst.” How true that appropriate proverb was to prove!

Getting back to Gilbert, he had smooth sleek hair of a lovely shade of brown that took on a copper tone when shone on in the sun. There were discreet white markings extending over his lean body all the way to his short perky tail. His angular countenance often bore a dewy, contemplative, deceptively docile expression. Thus his appearance could lull one into a dangerous state of relaxed trust, an attitude that turned out time and again to be disastrous. Ah, with such a persuasive visage as Gilbert’s a human could quite likely conquer the universe!

Crowning this noble demeanor were delicately curved horns, alas and alack, for like all members of his particular mammal family he had indomitable impulses to butt with them from behind, not to mention in front— there would be the warning, if one knew him, of that espiègle look in his eyes and the set of his posture, after which, following in speedy succession, would come the charge.

As for his distinctive smell, apropos of its mephitic reputation, I did not find this pungent odor offensive. In all honesty, I came to love Gilbert. And his aroma was part and parcel of his nature— a nature bedevilingly full of contradictions— both beautiful and beastly, endearing and infuriating, also wise, quick-witted, shrewd (a genius at getting his way), as well as exhibiting obtuseness to the point of absurdity (or did he just play dumb, as I always suspected?)— all at the same time.

Anyhow, I shall leave such half-grokked analyses for scholars of these matters and proceed to relate some of his peculiarities and the incidents that marked that epoch of his and my shared history.

Did that taste grab ewe by your scruff? Get the rest of your read on here!

Oh what a night it was in the land of Swirl’n mic Mad-ness! We were Skype’n, UStream’n, and word around the Lounge, Periscopin’ too! Why all this video streamin’? We needed to get the Emerald Isle closer to Dallas because we featured Irish Poet Brendan McCormack! And what a feature it was…

As Swirve started their jazzy madness, the crowd found their way into and filled the VIP lounge with their heads boppin’ and their fingers snappin’. As the last notes were fading away, hosts Johnny O & MH Clay dropped the movie screen (aka a white sheet hung over a pipe), turned on the camera & projector, and opened up the stage to the mad man across the pond, Brendan Mc Cormack. As his image swayed in the A/C breeze, it was quite reminiscent of the Wizard of Oz. Brendan’s booming voice and Irish brogue, those who witnessed this electric and eclectictic show were mesmorized. If you were there, you know what we mean. If not, well… your loss. But no worries, you can still view it on our Mad Swirl UStream channel.

After a brief intermission, the mic got opened up to the mad ones who filled the Lounge and what a night of the beat-utifullest poetry and music ensued! Here’s a shout out to all who graced us with their words, their songs, their divine madnesses… 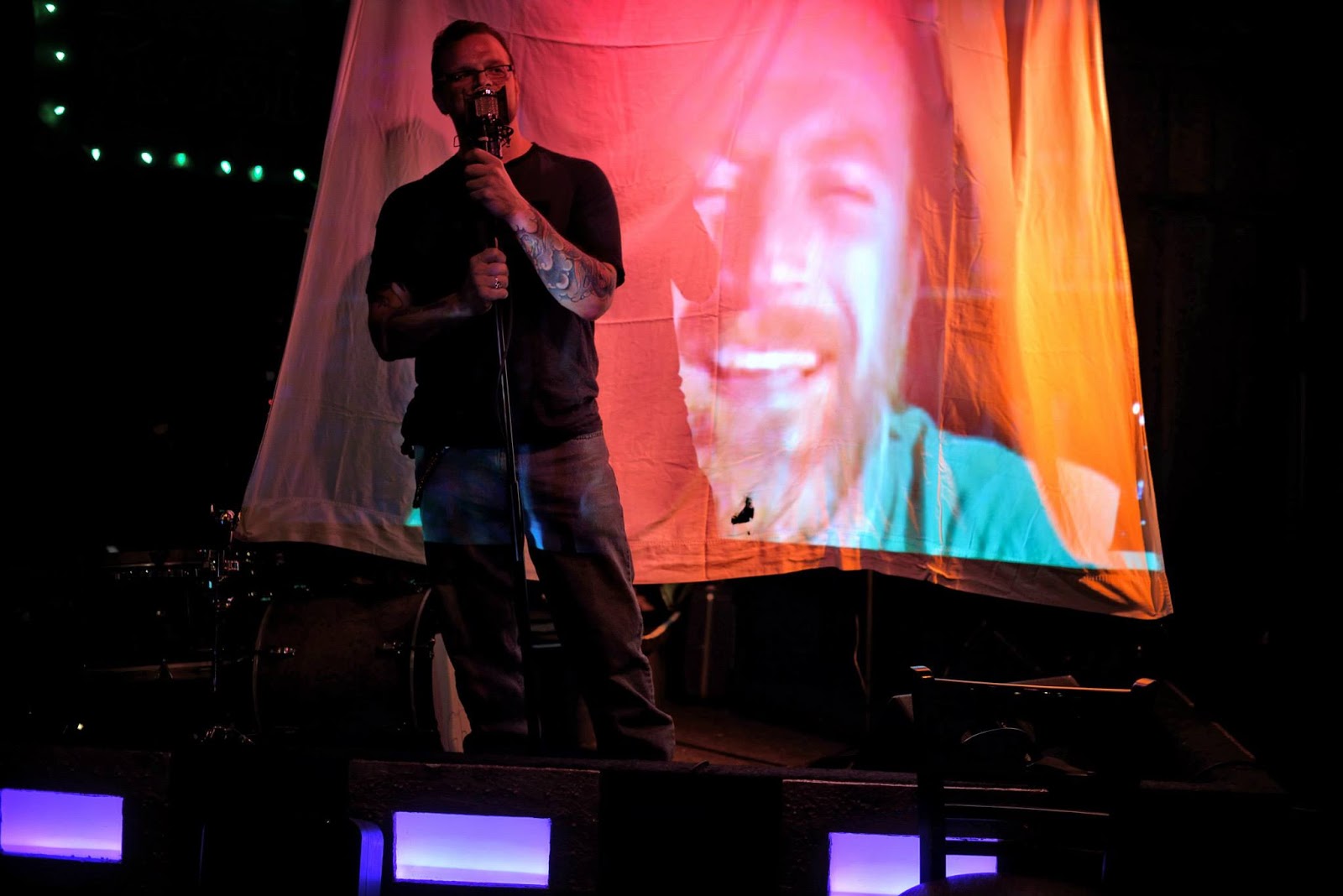 HUGE thanks to Swirve (Chris Curiel, Gerard Bendiks, and Tamitha Curiel) for keeping the beat til the wee hours of the night. We got taken to another dimension of time and space on the wings of their jazzy madness!

And as always, big THANKS to the patron saint of the loco local mad ones, Kevin Christensen, owner of Absinthe Lounge, who has given 125 reasons to give him all the mad props and love that we do!

We look forward to ALL the m-adventures to come! Stay tuned for…