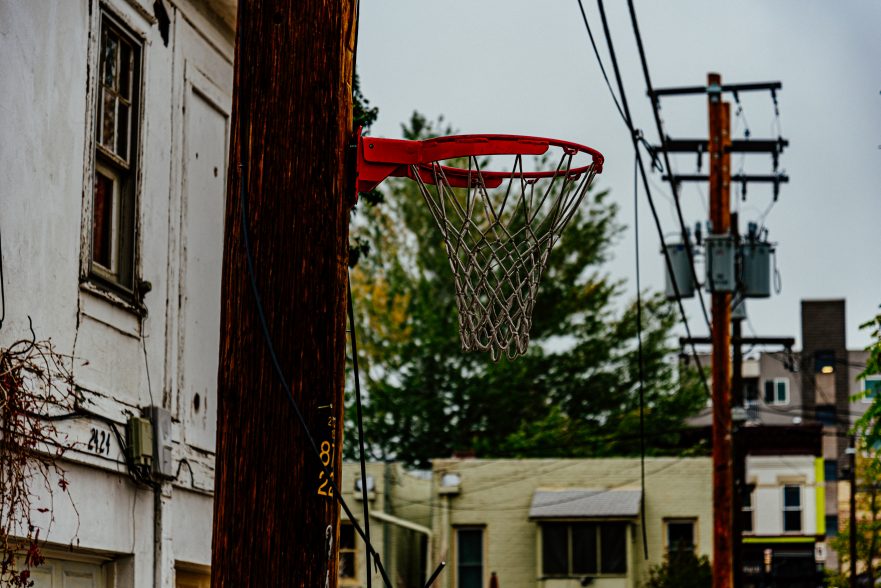 People from Newark have a beautiful quality of saying exactly what’s on their mind.

From the ages of eleven to thirteen, I played on an AAU basketball team from there－The Newark Rams. A basketball director from a summer clinic in South Orange, New Jersey must have had a wicked sense of humor when she told my mother that my older brother and I oughtta try out for the team. We drove all the way down South Orange Boulevard and into the heart of the hood－St. Rocco’s Church.

At St. Rocco’s Church, there were no out-of-bounds. The ball went beyond the lines and three kids would dive into the chairs and knock ‘em over to retrieve it.

Our coach had an effective motivational tactic to prevent our center from putting the ball on the ground and dribbling after getting a rebound rather than going right up to the hoop with it:

“Yo, Acton－put that ball on the ground one more time’n I’m gonna put you in a box and send you back to Trinidad!”

Both my older brother and I made our respective age group teams. My impression was the coaches felt too sorry for us white kids for coming to cut us from the team. Though the other kids didn’t believe I was white. They thought I was Puerto Rican (kinky Jew fros can go that way) and called me their nigger. I never knew how to respond. Thanks?

I became useful on the team as a decoy. Word got out that we had one really great kid on our team and the scouting report was to stop him. That was white Mike. Except the other teams didn’t know anything about him other than he was the white kid on the black team from Newark. So the strategy became that I started the games in the starting five. The teams thought I was white Mike, and when it became apparent I was no world-beater, they relaxed. Then the coach substituted Mike in for me after 4 or 5 minutes and the other team never knew what hit ‘em.

I was helpful to the team in another way. There was a geographical argument going on. They couldn’t agree on if Africa was a country or a state, and what the capital of it was. I had to set them straight. The looks I received indicated that they’d never heard the term continent before. I think of this when I hear black Americans stress how important it is to them to be called African-American. My experience taught me that there are many out there who probably can’t pick out Africa on a map. What am I Russian-American? Iraqi-American? Because of where my grandparents were born? I’ve never been to either country and have no more relation to them than the kids I played ball with had to Africa, aside from some of their first names. You’re born here－you’re American.

What is it anyway with this desire our species has to assert how different we are from one another? And based on something as superficial as skin pigmentation or where you were geographically born－which you have no control over? It’s been proven scientifically that there is more genetic diversity within the species of a chimpanzee than there is between humans. If there is one defining characteristic of humans it is what we ourselves refer to as inhumanity. No other species commits genocide, torture, or acts of abuse for the sheer heck of it. A shark, for example, kills for food, survival, or out of self-preservation. If it ever takes a nibble at a human it’s either because they’ve mistaken it for something else or out of curiosity as to what we might taste like.

Anyway, we won a New Jersey state championship on the back of white Mike. That sent us to the nationals in Salt Lake City, Utah that would be won by the number one ranked team from Akron, OH. The year I was born would’ve put me in the same age group as LeBron James. Make your own deduction.

We lost our first three games and got sent to the loser’s bracket. Here’s where the Newark thing kicked in.

Mike’s grandmother came out to see us. We were one game away from elimination. If we lost, we were going home. It was the middle of the first half, we were getting our asses kicked, the coach had gotten drunk and overslept and my father, bless his heart, was doing his best as a substitute fill-in coach. A timeout was called. And Mike’s grandmother, the only person in attendance for our team and one of three people total in the stands in what was basically an empty and otherwise silent gym up until that point, just ripped into us:

“I thought you guys were supposed to be good. I flew all the way out here because of that. You stink! I came all the way for this? You’re terrible. What’s wrong with you? Mike－you stink! I’m gonna tell your father…”

This was our cheering section. She told us like it was, which in a world full of people who lie and bullshit as much to themselves as to others is rare. With a little kick in the behind from grandma, we won seven games in a row, made it out of the loser’s bracket, and all the way to the semi-finals of the whole tournament where we lost in overtime by one point－one game and one jump shot at the buzzer away from facing and likely losing to the team from Akron, OH in the finals.

Except to go to Lopes, the Portuguese sausage joint on Walnut Avenue, I’m in no hurry to go back and visit Newark. Forget the roller coaster rides, take a stroll down to the corner of Broad and Market streets. That’ll get your adrenaline going.

The game of life is just this: it’s no game. Both winners and losers crawl towards the cold ground, but both have stories of a few victories along the way. ~ Tyler Malone