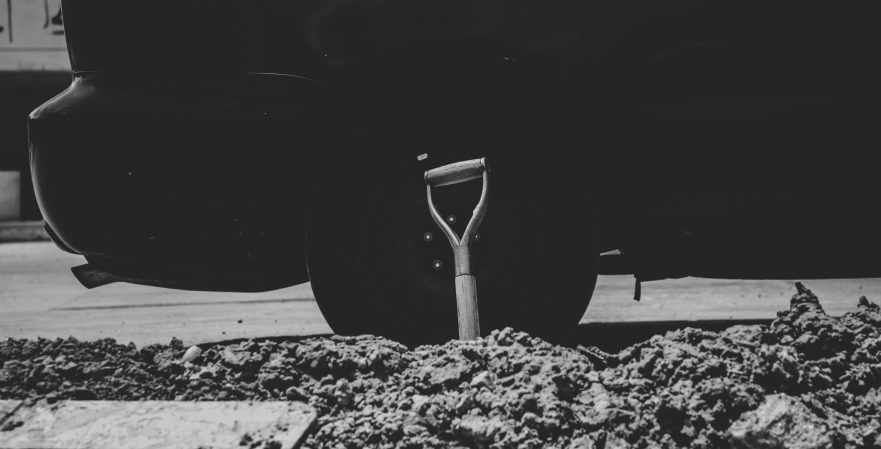 “You should thank me. I’m trying to keep robots from taking your job.”

A girl named Tracye scanned my items and I shoved them haphazardly into my reusable bags. I was drunk and only partially aware that I had crushed my bread under a massive jar of dill pickles.

“What’s that guy doing?” I gestured to her colleague. “He should be over here bagging my groceries. Hy-Vee used to be all about customer service but nowadays you treat us like prisoners in a Soviet gulag.”

“Did you say something?”

I paid with cash. Tracye did that trick where she counted back change starting with the amount tendered. I was drunkenly mesmerized by her mastery of simple mathematics.

“You’re great at your job.”

I pushed the cart down another ramp and through the automatic doors to the car park. Rocky was overjoyed to see me. Bulldogs aren’t the smartest members of the animal kingdom. If I went somewhere without Rocky, he yelped incessantly, convinced I would never come back, even though I always did.

Rocky’s nubby tail waggled back and forth in response. I wrapped the groceries like a burrito in a wool blanket (to protect them from bulldog slobber) and got behind the wheel.

I was drunkenly overconfident in my driving abilities. The car drifted through the car park like it had its own ideas about where to go, almost striking two pedestrians and a rogue shopping cart before approaching Highway 74.

I saw a gap in traffic and pulled out. I looked both ways but didn’t notice the rollerblader until it was almost too late. I mashed the gas. The tire squealed as the Subaru accelerated, missing the rollerblader by just a few feet.

I recognized him immediately. It was Oscar winner Matthew McConaughey, cruising down Highway 74 at 35 miles an hour with a tricolour sweatband around his glistening forehead. The whole situation was bizarre, but I was drunk and accepted it at face value, without attaching additional symbolism or questioning how he could attain such blazing speed on inline skates.

People always told me I did a good Matthew McConaughey impression.

He bladed effortlessly behind the Subaru. I watched in the rear view mirror as he glided with the elegant grace of a leading man. I waved my hand sheepishly, a makeshift apology for almost killing him. If he noticed my gesture, he didn’t show it.

I realized in this moment, after almost splattering Matthew McConaughey’s guts across the highway, that I was way too drunk to drive. My misguided inner monologue convinced me I could control the Subaru through brute physical force. I gripped the wheel so tight my knuckles turned white. The car weaved unpredictably, oscillating between the hard shoulder and oncoming traffic. What was I thinking, going out for groceries after a spirited afternoon of day-drinking on the patio? Had I lost my mind completely?

Then I noticed the flashing blue lights in the rear view mirror. A police car was behind me and gaining ground. That Blue Swede song “Hooked on a Feeling” came on the radio. I turned up the volume to drown out the wailing sirens and popped a stick of gum into my mouth, hoping the minty freshness would obfuscate the smell of malted hops and barley on my breath.

My palms began to sweat, and a feeling of dread washed over me. There was nothing I could do, the cops were closing in. I was undeniably drunk and they would have no other choice but to take me to jail. Rocky would have a panic attack at the animal shelter and my tub of Ben & Jerry’s would melt in the back of the Subaru.

The road grew narrow as I forged ahead. I felt like I was driving on a tightrope without a net to catch me if the wheels lost their grip. I focused on a set of traffic lights up ahead, entering the intersection just as the signal switched to yellow.

The Subaru hit a gravel patch and fishtailed erratically. I regained control just in time to keep the car on the roadway. Three police cars were now in pursuit, and I realized there was no point trying to outrun them. I pulled to the shoulder and activated my hazard lights.

Disoriented by the flashing lights and sirens, I climbed out of the car and put my hands on my head. I was ready to accept my punishment like a man. An atheist’s prayer passed my lips, please don’t let me go to jail, and as it turned out, some sort of higher power was looking out for me. The three cop cars took a hard left at the stoplight and sped away towards something else.

Still to this day, I’ve never been caught, knock on wood.

We’re all guilty of something. Breathe in knowing that, breathe out knowing every breath is one step closer to being found guilty by someone other than yourself. ~ Tyler Malone

J. Archer Avary (he/him) came of age in the palpitating heart of the American midwest. He rode the magic carpet of television journalism across the US and to the Caribbean, where became a lionfish hunting champion. He quit TV and now lives in Guernsey with his wife, where he is a furloughed aviation worker. His poetry/prose has appeared in Bright Flash Literary Review, Ariel Chart, Daily Drunk, and Rye Whiskey Review.