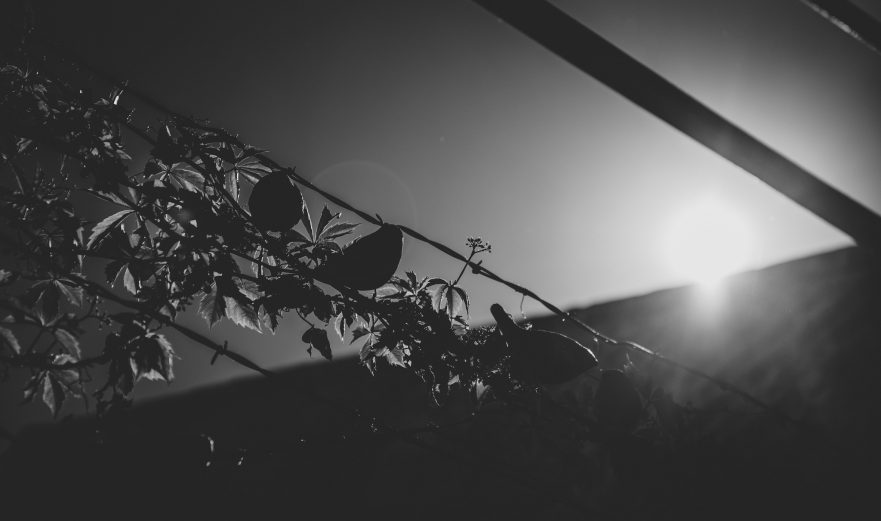 “I’m in love with that moment when I go to sleep, when my head sinks in the pillow and my body goes deep in my bed.” It’s a moment of giving one’s self up to the world of dreams. What a misty enigmatic magical world in which we may interact with our subconscious mind! It seems that all the thoughts hidden in our subconscious mind wait for us to give in to sleep to break free. It seems like you’re watching your life, backwards and forwards, in a more chaotic manner than life itself.

Although the disease was never his biggest concern, he wouldn’t think of leaving the house if it wasn’t for the big brother. All that he needed is a small room where the big brother isn’t there, for he was always watching, criticizing, and giving orders.

“Are you crazy!” She exclaimed in fear.

“It’s not the end of the world.” He said, although he didn’t mean it.

The disease in the air forced everybody to stay home. The streets were almost empty. He gave his mother a strange look and left. Words stopped at the edge of articulation and disappeared into thin air. Lately, there was a war inside him, his thoughts were too dark to be declared so that they would either put him in a straitjacket or get him behind bars.

Standing on the threshold of his house, he lit his cigarette and moved forward. It has been lately a habit for him to go for a walk in the early evening. The sound of poplar trees has always astonished him. How is it possible for a sound to be so much soothing and terrifying at the same time? Perhaps the wind is responsible for that coexistence of good and bad sounds as it is responsible for the nature of smell. He has always had a mysterious feeling when night comes, the absolute silence that gives birth to such nocturnal obscurity has always captivated his inner thoughts. He lifted his head and looked at the moon that made his shadow so clear behind him and wondered: How can I be free when my shadow takes every step I take! However, shadows are the gloomy children of light. Every light casts a shadow, hiding what should be hidden, creating that sense of wonder and ambiguity, for ambiguity is the ultimate lucidity, and clarity is nothing but that fake sense of knowledge that gives stupid people a sense of relief.

He kept accumulating these pieces and fragments in his mind. At least I can leave my house, he thought, for me, it means more than it seems to be. Perhaps it’s that exotic yearning for escape, to be free, to unite with the external surrounding, who knows! Everybody is busy indulging themselves in their own daily rituals. The private world that people make for themselves is such a blessing and a curse at the same time. There you would be a prisoner of your own world but free from others.

He used to spend some evenings with his friends, but after the war, he accustomed himself for his lonely nights. Roaming the empty streets was all he had. The ghost of his dead father always accompanied him. He sometimes spoke with him, for he wasn’t able to do so when his father was alive.

“What can you do when you’re alone?” The father exclaimed.

“What cannot you do?” He replied.

“You used to read books,” said the father.

“Books,” he said, “the fruit of poor souls, the treasure of lost spirits in this vast whole of human life.”

“What is sanity, Dad? What should I do to win the medal of sanity? Oh, Father! I must be bound by rules that make no sense for me. I must be always under control and keep my mind inside its rusty shell and shut the door.”

“A thin line lies between sanity and madness. You must cross that line if you have the courage to face your true self. If you’re brave enough to cross it, perhaps you’ll find answers.”

“But who does?” Those who did have touched the true nature of the human mind that has dismantled all restrictions and boundaries. However, very few survived the shock; it was so heavy; it was more than they could bear. “Oh, Father!” He exclaimed with a sigh.

“What troubles you more, son?” Asked the father.

“My big brother.” He replied.

The big brother rules the house like an angry god. People work, and he gets paid. He eats the best food and leaves them what keeps them alive. They pray to God and he gets God’s kindness. He curses God and they get God’s punishment.

“What is God, Dad? Why is he always against people like us?”

“God is a notion, an idea, or perhaps just a myth.” Painfully, the father replied. “You cannot put the blame on an idea.”

“Is it different from the dusty ideas that humanity have been churning out for centuries?” Heart-ached, the son replied. “Every civilization comes to an end and vomits its ideas in the dishes of a new-born one, repeating the same dull process taking what is left.”

“Men like you will always be alone, Son.” The father’s ghost whispered before he disappeared.

All the strange thoughts that have come to his mind throughout his miserable life gathered and made his head so heavy. He gave up when he realized that the shadow wasn’t his own but his big brother’s. He went back home confused, rolling down the road in such a moonlit night.