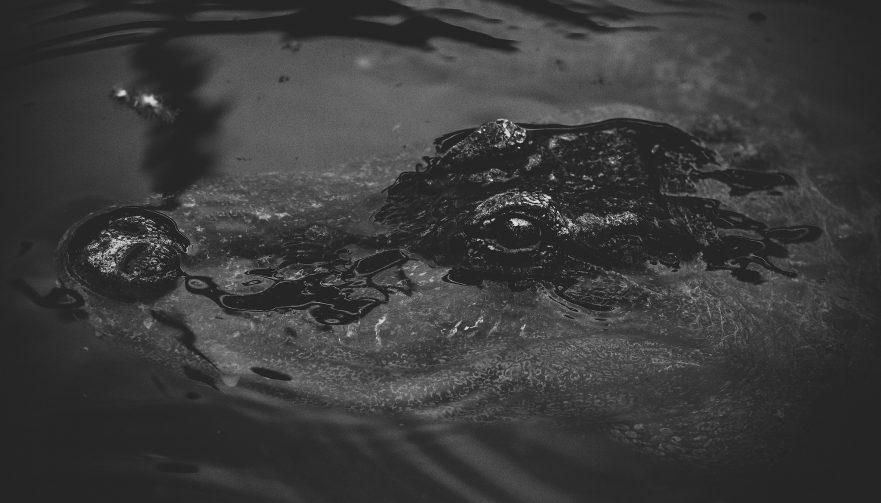 When shimmering they came, he was hanging over the railing of his second-story balcony. He loved to stand on the balcony watching the sun’s comprehensible inertial descent behind the skyline of Agung Darussalam to the east and Masjid Agung Darussalam to the west. He would smoke his only clove cigarette of the day while he watched that happen. He bought Marlboros by the carton. He never considered smoking less than three of the processed American classics each day.

It was only because the penalties connected to drugs were far too great, that he’d quit smoking his single marijuana cigarette each day. And, so, he had substituted it with a clove one. It was one of the most disappointing substitutions he had ever known. He wondered, each time he went to the toko, why he maintained it. When he was alone here on the balcony with a sunset like this one, he never questioned the choice.

The smell was spiced. It hung when there was no breeze, which was seldom. But instead of the tarry-yellow and the musty linger of his Marlboros, these, even in a breeze, left his hand and the air around his head fresh in a seasoned way that approached cinnamon but was not quite any solitary, common spice.

It was between breezes, a thin, bluish haze just beginning to spread, that they came, shimmering.

The image was such, it was processed in his mind in a way so unique that it seemed foreign to him despite being his own cognitions. One line of thought may have been prompted by the image passing into his left eye. The four of them walking in the middle of the street. This eye was, though by a minute degree, higher, and, so further above them. If they weren’t shimmering, this street would have killed them. I can hardly cross it without being bumped.

The other line of thought began an imperceptible time later, this being one of the facts supporting the idea that this line of thought was prompted by the image passing into his right eye. This eye, being farther from the shimmering source of the image, and, though also by a minute degree, it is significant that this eye was more parallel with them, as a result of his head’s slight angle. The four of them are walking in the middle of the street. If they weren’t in the street, maybe they wouldn’t be shimmering. It’s probably the heat.

He was at a disadvantage. His mind tried to compensate, tried to consider geometry and physics it had partial knowledge of while tempering itself with rational thought and personal experience, as to prevent panic. The fitting response was more-or-less on par with what strict mental hygienists might term a psychotic break, such was the image.

Jonathan Kayman wanted, at a level of desperation, for them to arrive. He felt anxious. He had an intense conviction that, once they had arrived and passed by, he would again feel okay about going on with the life he and the world had shaped for him. Then he was seeing, with the intense clarity implied by the phrase “the back of one’s hand,” yet without the explicit visualizations associated with the word “hallucination,” one of his childhood toothbrushes. It held in his mind, and a small part of his consciousness began down a track something like this. I loved that toothbrush. It fit in my hand so perfect. I’m so glad it was green. It was shaped like a big lizard—wait crocodiles are reptiles, but they aren’t lizards.

Meanwhile, that other part of him, in active monitoring, desperate and waiting for the agonizingly slow parade to arrive, began attempting to rationalize how the vivid thought of a long-ago discarded toothbrush had captured so much of his mind.

But—was it a crocodile or an alligator? What did everyone always say? How can you tell them apart?

He fingered the railing. The paint was a slick new coat; nothing like scales.

It was the eyes—no. It was the shape of the snout. Jonathan rubbed his hands together. They are warm—not cold-blooded. Alligators have short, thick U-shaped heads. He rubbed his tongue around his mouth. Crocodiles have long, thinner V-shaped heads. He prodded the gum-line along the upper left. But the tooth-brush was in profile. Ahh, I need to brush my teeth. Fuckit; that snout seemed short. It was an alligator.

Most people have not learned, when these reptiles are raised in captivity, it is far less uncommon for their head and snout to be misshapen. If Jonathan had known this, he would have considered it was highly likely any large reptile which modeled for a toothbrush would have been raised in captivity; and, so, the shape of that particular snout would have been a questionable basis for determining the taxonomic family of the reptile. Another, perhaps more pertinent method of distinction unknown to Mr. Jonathan, is the fourth tooth of the lower jaw. While the upper jaw of the alligator is larger than its lower, both jaws of the crocodile are the same size. As a result, it is near-certain that the large, lower fourth-tooth of the crocodile will protrude. Interesting, in regard to dental paraphernalia. However, captive specimens may have worse teeth than wild counterparts; while other specimens, captive and wild, may be missing teeth, for instance, a large, lower fourth-tooth.

None of this occurred to Jonathan who instead of brushing his teeth, had lit a second clove cigarette, which had, throughout his sixteen months of living here, been unheard of, and now he ached for them to arrive, as shimmering they came in a harrowingly slow parade.

How lucky we have words to partially explain the madness in our minds! ~ tyler Malone