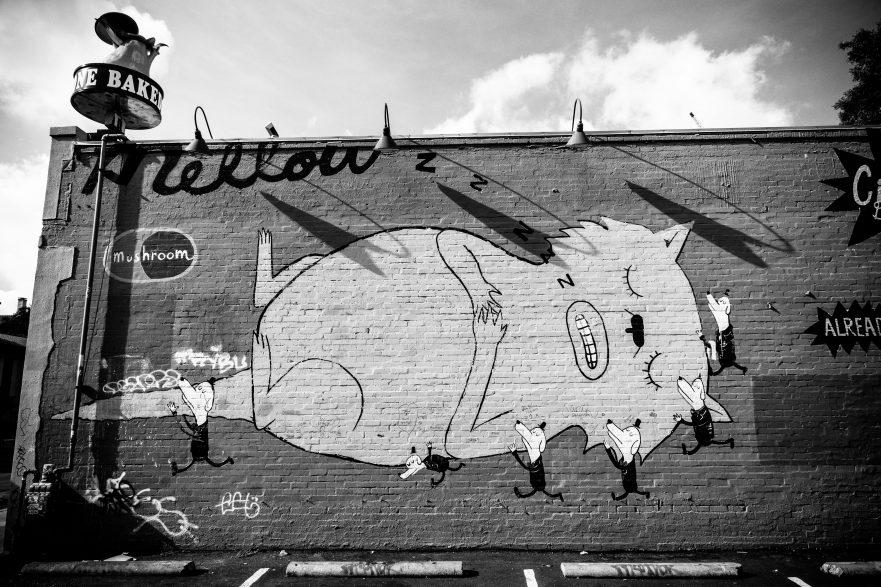 photo "Phoning It In" by Tyler Malone

“You know my company. We’ve been around since the beginning. Before us, it was men on horses carrying envelopes, they say. There was no telephone, no telegraph. We made both, but we didn’t make them out of nothing. There was a creature, a monster, I guess, living in the ocean. From what I was told, it was huge, about the size and shape of the continental United States. But it wasn’t easy to perceive, they say. It was telepathic, meaning it could get in your head, make you not see it. The problem, for it anyway, was that part of it got stuck in the New Jersey salt swamps off the Hudson River. And some enterprising asshole with too much time on his hands got to know it.”

“The guy made friends with a telepathic sea monster. That’s what happened. This was the eighteen hundreds, and people had all kinds of time on their hands, especially this guy, trying to make a buck with nothing but acres of stinking salt marsh.”

“When in the eighteen hundreds?” Bryan asked, just to slow Van Harappan down.

“Well, they say the company was founded in 1882, right after the Civil War. So, this guy learns about the beast, learns how to talk to it. But that’s not enough for him. He learns how to hurt it with fire. Later on, he uses electricity and copper wires. He learns how to scare it, control it. Five years later, you have a communications system stretching twenty miles in all directions from that swamp, then a hundred, and a thousand, all on the tortured back of this magical, one-of-a-kind telepathic beast.”

“But what about Morse Code and all of that?”

“Just revisionist history. They had no idea about how to do that, not at first. Of course, the company had word limits, pay-by-the-letter schemes, but that was just to get better prices, and to get people to focus, to feed clearer thoughts into the monster.”

“You know how you get paid, and yet you doubt …” the CEO said, suddenly seeming much older.

“Okay, so the beast—is it still there?”

“Anyway, by the 1950s, it was clear that the beast wasn’t doing so well. It was giving off distortions, mass hallucinations, interrupting phone calls, all kinds of problems. But by then, we and a few other companies had figured out ways to produce a crude replica of the creature’s abilities. Still, we kept the poor creature plugged in until she died in a shower of UFO sightings. We had an adequate phone system, but the damage had been done.”

“Damage? This is the first I’ve ever heard of any of this.”

“Imagine an ancient, telepathic beast, enslaved and tortured to death with a hundred thousand copper wires over the course of seventy years—never mind what was done to her during the wars. You have this hyper-intelligent creature who knows what’s being done to it, knows who’s doing it, and knows the petty, grubby reasons why. And it can get in their heads. As it dies, in terrible pain, who do you think it will lash out at?”

“Yes, for starters—followed by the executives, management, employees, shareholders. Once in a while, some of our new shareholders will question the pension plans we offer our now-obsolete operators, our retired linemen. I came on board right out of business school, and I was shocked at the scale of the human ruin, the dead-eyed husks that made up most of our workforce. If you ever wondered about fates worse than death, I could’ve produced three dozen before lunch in our headquarters alone. I was an executive vice president before anyone would explain what that dying creature had inflicted on our workforce in its death throes. And for the people who held the stock, well, let’s just say they learned the true meaning of the word ‘shareholder,’” Van Harappan said.

This Lovecraftian monster was never known to phone it in, it was just tongue-tied when it came to humanity. ~ tyler malone