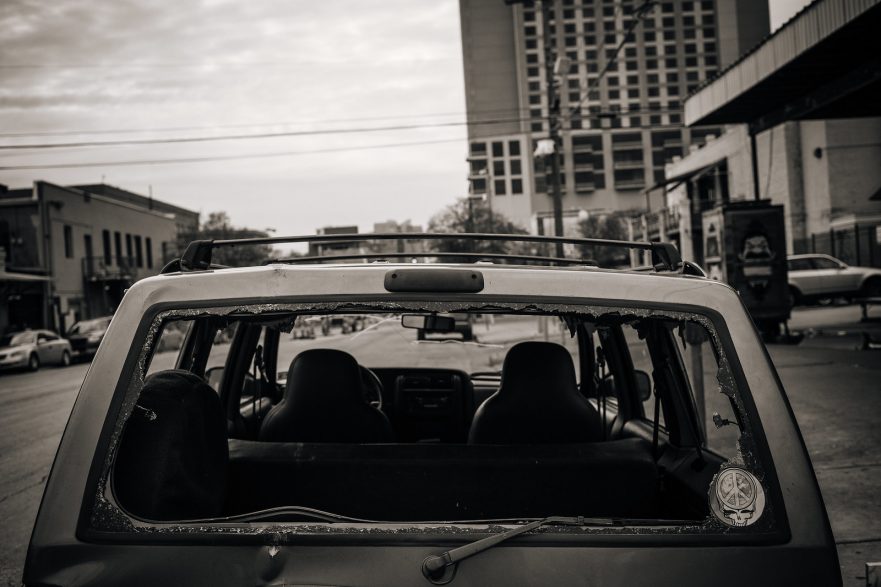 photo "Heart Like A Broken Window" by Tyler Malone

“I went up those stairs at my next door neighbor’s party after midnight on New Year’s night to fetch our winter coats. I turned on the light and all the coats were on the floor and Gail was naked under the blankets making it with my next-door neighbor, this guy that ran a bunch of tanning salons. I flicked the light off. It was on no more than two seconds, just enough for me to catch her naked shoulders as she moved up and down on top of him. I felt dizzy and sat at the top of the stairs for a couple of minutes, and then walked back across their driveway to our house. I wondered how I, who used to live downtown in a tiny space that no one wanted to rent for a store, had ended up married to a woman in suburbia that worked for the state and had two kids. We had nothing in common. I figure I wanted to see what life was like on the other side. Gail was desperate to replace the husband who’d divorced her, but a woman with two teenage kids in her forties ain’t going to have many to choose from, so she’d settled on me. I always sensed she was still looking. She didn’t want to be married forever to a guy who drove a cab, even if I romanticizing our beginnings, telling people how we first met when I picked her up drunk at the airport, how I helped her with the luggage and we’d fucked right on her living room floor. I was working for Roy’s then. I was making efforts to get the drivers organized and unionized, but this is Texas and the drivers wanted nothing to do with “socialist” unions. They wanted to be independent.”

Latch sat down his beer and made the motion of quotation marks in the air for the word “socialist.” We huddled in a dim booth at the Chili Parlor drinking inexpensive beers on a Friday afternoon. People call me Jimmy. I carry a kind face and am a good listener. Many writers seem to forget I’m a fellow scribbler and will share amazing personal details.

We were escaping a cold January day in 1981. A gulley washer was pounding outside. Rain brings people together and brings out stories.

“Well, anyway, Gail came home about an hour later, and I was sitting at the top of our stairs, thinking she must be having a good roll in the hay with the neighbor. He did have the weight lifter look. I was in shock, immobilized. Gail came up the stairs in the black dress she’d worn to the party. Her head was down. She tried to slip by and mumbled she’d left her winter coat behind. I don’t know why but that made me furious. I reached up and grabbed one of her arms. I stood and got both of my hands on her and threw her down the stairs. I could have killed Gail, but I turned and went into our bedroom, took off my clothes, put on my pajamas and climbed in bed. She came in about thirty minutes later. She got undressed and slipped in next to me. Did she think I was asleep? Or did she think I’d be turned on by what I’d seen and would want to do it with her now that my neighbor had warmed her up? Nothing was said. We never talked about it. She knew she’d sinned and accepted the punishment. I felt terrible about throwing her down the stairs, but I don’t think that was what killed our relationship. What did the marriage in was I’d never had kids and couldn’t deal with her rebellious daughters. She wanted me to be an authoritarian father. I tried when they wouldn’t come home till two in the morning, or when we found drugs in their rooms. The way they acted made me want to slap them around but I never touched then. I worried about my anger I started driving more hours, not coming home till after twelve. Working on the weekends. After Gail and I split, those girls–I used to call them my kids–would come over to my place. They’d tell me their troubles. They’d left home and were trying to make it on their own but Austin rents were climbing. They pleaded their need for money and I gave them two hundred each. I haven’t seen Gail or the kids in two years, but remember when I sponsored that poetry reading at the Arts Center after we split? She came dressed to kill to get me back. She wore that same sleeveless black dress. Can you believe it?”

“I remember the two of you talking after the reading,” I said. “You were talking loudly.“

“Yeah, I wanted to make sure she knew we were done.”

“You want another beer, Latch?” I asked.

“Do you mind if I ask you something?”

“Was Gail good in bed? Do you think maybe Gail’s available for a fling?”

“She’s all yours, man. She’s in the same house. She’s not remarried. I still got her number memorized. Here, let me write it down for you.”