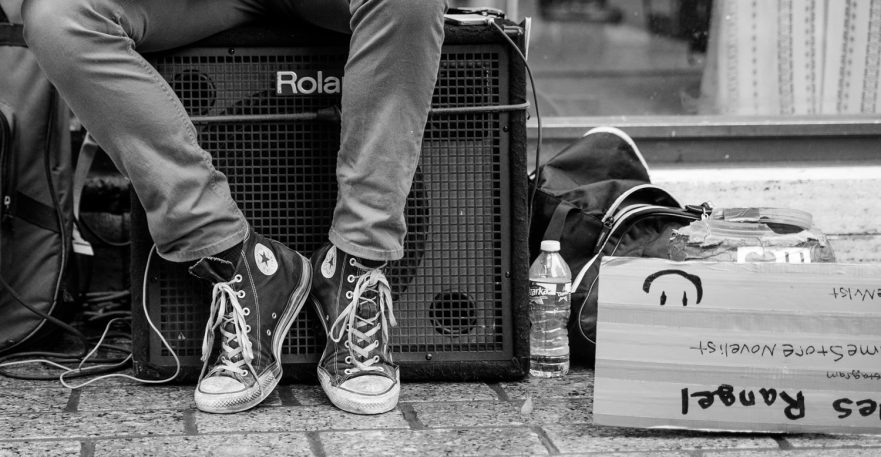 photo "Speaker Fuzz" (above) by Tyler Malone aka The Second Shooter

Come in! came a voice.

Hurley went in and confronted a bald well-built man in a wife beater undershirt with an electric guitar strapped on, playing scales slowly with no amplifier to the tick tock of a tall red metronome. He didn’t stop when he saw Hurley. He just nodded What do you need?

I need your name.

The ticking of the metronome and the tiny sound of the unamplified notes set the pace for the conversation.

My name’s John. Why? What’s your name?

So what do you want, Hurley? What can I do for you? Why do you want my name is that all you want?

Pretty much—but how can you play those scales without a break and talk to me at the same time?

Because I’m the best guitar player in town. Maybe in the county. Maybe even in the state. Mostly because I spend four hours a day playing these scales like this.

Do you have a job, John?

Sure. I work at the Big Town School of Music.

Sure. I know Willie. He’s a jackass.

Do you do anything as well as I can play these scales?

Not that I’m aware of.

Then you’re a jackass too. Leave then, and let me be, unless you need something else.

Hurley cocked his head and screwed up his mouth—he should have taken offense at being called a jackass, but, for some reason he did not. The up and down of the scales filled all the space inside him. It actually began to be painful, and, the instant it became unbearable, it forced words out of him.

Play me a song on the guitar before I leave.

Because I want to see how good you are.

That’s easy to say. Maybe the best at playing scales—but what about songs?

I get paid for playing songs. I play all over. I get paid a lot.

Okay then—I’ll give you ten dollars to play me one song.

Nonsense, I am worth far more than ten dollars. But wait one minute. Just one.

John stopped playing the scales, unstrapped himself from the guitar, and went to a sink against the wall and washed his hands with steaming hot water.

Why are you doing that?

But you said nonsense, ten dollars is not enough.

Never mind what I say—by the time I am ready to play, you will have decided to pay more.

Oh yeah? How do you know that?

After toweling dry his hands, John strapped the guitar back on, and faced Hurley. There were no scales. Time passed. One, two, three, and more minutes—not much time could really have passed because John never blinked the whole time, but all at once Hurley knew, this was some kind of trap. A trap that covered them like a glass dome, in which their entire futures would be determined, if it went on this way long enough, standing and staring, with one not paying, and the other not playing. If let go too long, it would solidify, and it that would be the end. As this hit him, Hurley turned and rushed out into the hall, and the scales began again, but the door slamming shut cut them to nothing. Hurley rushed away down the hall, past door after door after door after door, each one taller darker and heavier than the last, as though the place had become some endless castle you’d see in some crazy old book. It had not been this way coming in. It was now this way coming out—in, out; in, out. What has happened? Something had happened. No end at all. No end. Inout. Inout. Updown. Just like scales.

The worst music ever heard, ever made, ever loved, won’t accidentally be the soundtrack to the end of everything. It’ll be as intentional as the fires that burn down everything we’ve built. ~ tyler malone

My short work has appeared in many literary magazines and journals, including Alaska Quarterly Review, New Orleans Review, South Carolina Review, and Witness.

A chapbook of my short stories will be released in October 2010 by Burning River.

My work has been nominated for the Pushcart Prize, and the Shirley Jackson Award. One of my stories was cited in the O. Henry awards anthology.