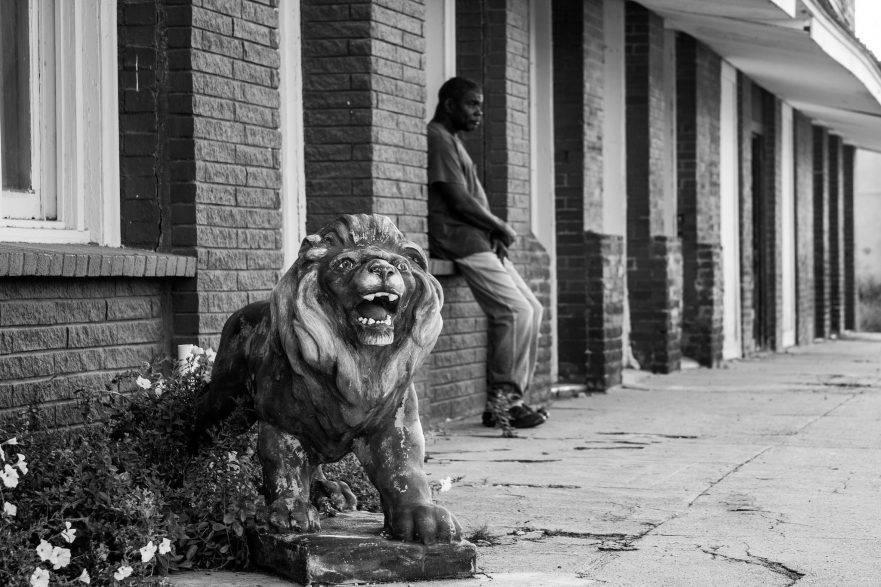 photo "Lion Tamer" (above) by Tyler Malone aka The Second Shooter

The young cat’s abduction was a major loss for both Granddaughter and Grandma. Montgomery’s wife had taken to mashing food for Kitten as soon as Kitten had sprouted teeth. Every morning, after prayers, but before scrambling eggs for Montgomery, Grandma pulverized hard cooked eggs and giblets, added a bit of oatmeal and then mixed that goop with canned tuna water.

Montgomery was repulsed by the concoction, but Kitten was charmed. Daily, Kitten jumped to Grandma’s shoulder and meowed until his special mix was placed in his food bowl. No one questioned whether or not Kitten would eat his entire portion; the family members only gawped over his speed. Mornings when Granddaughter was ready early, she used Montgomery’s stopwatch to time her baby cat.

For a while, neither Grandma nor Granddaughter knew that Grandpa made a different mix for Kitten midafternoons. Only Montgomery was privy to those sunny, round-tummy hours full of purrs and snuggles. After all, as an officer of the Penny Pinching Septuagenarians of the USA, he oughtn’t to waste the licks left on cream cheese wrappers or the “extra” sardines found in tins.

Actually, just before the cat was shanghaied, Grandma caught Montgomery napping with their fuzzy. The library she was visiting had closed early because of a federal holiday, so Grandma had rushed home to prepare a surprise bar-be-que of tofu brushed with black bean paste, Montgomery was getting a bit pudgy.

However, the family wound up eating their usual Sunday bologna and mayonnaise on Wonder Bread since Grandma wasn’t able to access the fridge without waking up Montgomery and their wee kitty. The pair had fallen asleep across the threshold separating the kitchen and living room. Likely, given that Kitten’s food bowl was near that doorway, he had leapt onto Montgomery’s lap after eating and had purred the two of them to sleep.

Montgomery returned to his toolshed for additional munitions. He was confronted by Grandma. She showed him smartphone images, shot by the bully’s mom, of Montgomery approaching with a rake and clippings bags. Grandma was determined that he not add hedge clippers to his arsenal- he could get hurt.

“Stand down. You’re in cahoots with the enemy.”

I stored my rock collection in the milk bottle carton in front of my house. Yours was in your milk carton. One day, you crossed the street and stole my favorite rock, a fawn-colored, slate-like wedge speckled with white spots.”

“Then why did you steal it?”

“What did your mother say when you stole my rock?”

“‘Apologize and ask nicely.’ I apologized. You anyway refused to speak to me again until we were in high school. I guess you were mad.”

“Daddy gave me that rock. He took it from the bag of stones he bought to border our garden. He never gave me things. That rock was precious.”

“But his parents are good people.”

“Daddy wasn’t? He encouraged me to marry you even when Mama didn’t approve.”

“Fifty years ago. She would have liked you, now, but she’s long dead.”

“You can still be Granddaughter’s hero. Just no toolshed weapons, okay?”

That night, Grandma locked her husband’s toolshed and hid the key under the dried seaweed in their pantry. If she had hid it under the chocolate chip cookies, Montgomery might have found it. He was an obdurate son-of-a-gun.

Over breakfast, with droopy lids and watery eyes, Montgomery appealed to Grandma. “Please help me get Kitten back. It’s been two days!”

“That’s nice, but Kitten’s not home.”

“Then go get him. But remember to ask nicely. Better yet, take Granddaughter with you.”

Grandma shook her head while watching the bald man and little girl gambol down the sidewalk. Montgomery could get zealous, yet he remained the good, solid man she had always loved.

Less than ten minutes later, her husband, Granddaughter, a shoeboxed Kitten, and the neighbor boy, Tonnie, skipped back to Grandma. Except for Kitten, she gave each of them a waffle cone full of chocolate chip ice cream. Her planned offering of kale and chicken liver chips could wait.

There’s nothing we want to get into that’s no another war. Neighbors, television commercials, specialized doctors, perpetual childhood, it’s all an enemy. ~ tyler malone