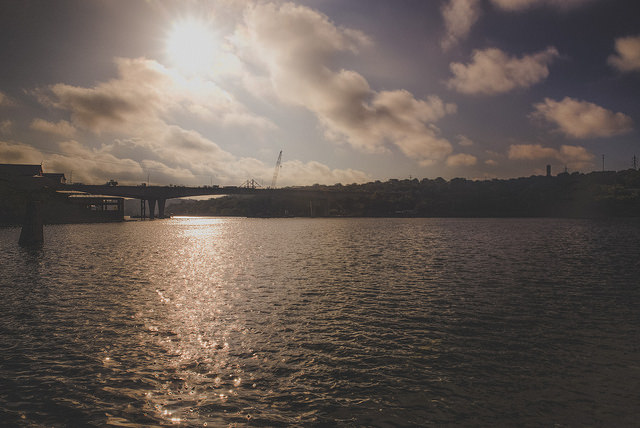 photo "The Plunge" (above) by Tyler Malone aka The Second Shooter

Denzel couldn’t conceive of anything but jail time in his future. Even if his trial was completed before he turned eighteen, he might be sentenced as an adult despite the fact he hadn’t cause Zoe’s death.

They had been skimming rocks across Kinzua Lake. Denzel had proposed a fishing date, figuring they’d find a spot along the twenty plus mile manmade waterway. It was not yet time for pike, but walleye was in late season and the bass run had just begun. They’d rent a walkaround from Wolf Run Marina. Denzel had been saving up for the occasion.

But by the time they got out to the dock, there were no boats, not even a simple canoe. They parked their fishing gear in a locker, patronized the concession stand, and bought enough Thirst-Quencher to hike the Rimrock Overlook Trail. Denzel kept his small, velvet box in his jacket.

He had wanted to present the diamond to Zoe at Docksider’s. Unfortunately, as was true of the boats, the restaurants’ tables were all bespoken. So, for a second time, the two filled up on corndogs and oversweet juice.

Denzel had next suggested that they skip stones. He would find a way to hand Zoe a particularly sparkly one.

She never received it.

At dusk, simultaneous with Denzel reaching into his pocket, Zoe spied a family of mink. After typing into her smartphone, Zoe recited that those shoreline feeders were likely eating frogs. She weighed whether or not to tell Denzel that mink bite prey’s necks to kill them, but lost the power of speech when she fell into the water.

Zoe had turned her back to the lake to set up a selfie incorporating the rodents. Her phone’s zoom captured images up to one quarter of a mile away. She had wanted to place her profile among those of the stoat-like critters.

Denzel’s girl had never told him she couldn’t swim or was afraid of water. She had agreed to an Allegheny National Forest date because she had had a hunch that she and her beau would be sharing a momentous day.

In no time, Zoe sunk below the surface. The edges of the Kinzua run forty-five feet deep. The center runs one hundred and thirty.

Denzel dove for her. Her engagement ring dropped out of his pocket when he submerged. It was that piece of jewelry, dredged by the park’s rangers, that Zoe’s hysterical parents used to indict him.

That there ought to have been a waterfront lifeguard on duty and that the substitute for a missing, regular staff member had been only shallow water certified, ultimately, exonerated Denzel. Nonetheless, although their would-be son-in-law was legally absolved, Zoe’s parents refused to communicate with him.

Gifts that go ungiven, those are the tragic artifacts that no amount of dust can cover. ~ tyler malone