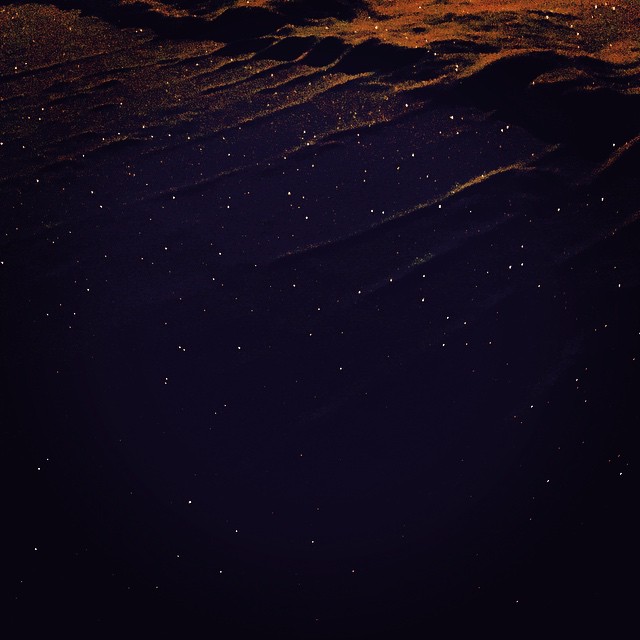 At last, at last, Wendell rests his skis at the other side of the lake in sunset, exhausted, satiated. He senses the water conscious and raucous down under the lake, glaring, straining upward, knocking against the depths of the ice again and again, enraged at his escape. He’s unwilling to look away, but does not want to cross the lake again. He’s done that, and doesn’t want to undo it. In twilight, he turns to see what lay behind him to see what lay ahead. The old horizon is here, silhouettes anchored in cold and quiet curiosity. He slides into the clear moon’s orbit, drifts into the white woodlands with silent, unrehearsed control. There is no hurry, no destination.

He journeys on and on for a long time or short time whereupon he encounters two small mounds of snow. He picks one up and holds it out in his palm. It moves. Startled, his hand jerks and it slips back onto the snow. He bends down, gently pokes it with wonder. He turns to the other mound, but it scampers out of reach.

“What are you?” Wendell asks.

The one he had held answers: “Snowlink”.

“That’s Snowslippery,” it says. “We’re twins, but you can tell us apart.”

“Right,” he says, and again reaches for Snowslippery.

“Why won’t this one stay still?” Wendell turns to Snowlink, who doesn’t answer.

He places Snowlink on the tip of one ski, and then glances at Snowslippery, who doesn’t move. The two of them begin, leaving Snowslippery behind.

They happen on the rhythm soon. They share the scenery, the splendor of the white trees and white rocks and every thing white resting whitely in whiteness.

After awhile, Wendell notices a deceleration, their pace rhythmic still, yet increasingly slower. Snowlink mumbles. The ski with Snowlink sitting atop begins to sink into the snow with each shuffle forward. Wendell’s intrigued. The phenomenon causes no sensation of imbalance. The farther he goes, though, the harder he has to push. The harder he pushes, the deeper the ski burrows into the snow until progress becomes impossible.

Snowlink turns, evidently having been aware of the situation all the while. He patiently, almost apologetically, advises that they keep moving.

“How?” Wendell asks. “I can’t go any further. Maybe if you jump over to the other ski…”

Wendell reaches down, lifts Snowlink and places him onto the other ski, then tentatively inches the ski forward. It promptly buries itself in the snow.

“What is going on here?!” Exasperated, he watches the moonlight shrivel, causing the mountains to whimper. He looks to Snowlink, but darkness now hides the tiny form.

“Hey! You still here? Where are you?”

“I’m here, where you put me. Maybe we should keep moving.”

Wendell shudders. Snowlink doesn’t seem able to help. Or won’t. He should have coaxed Snowslippery onto the other ski before they left. But never mind that now. He is lost. The adventure focuses on nothing more than loss of direction. He searches for signs of guidance. There are none. He tests the ski again. It doesn’t budge. He’ll be sculpted into frozen failure and never thaw, never, never thaw! His lack of destination seems irrecoverable.

“No!” He cries to the dark, dark night, “We have to find Snowslippery!”

Using the poles as crutches, Wendell throws himself forward, dragging the skis. His face contorts with the strain of single-minded strength. Inches, yards, and more, fall to the wayside, until he plunges into the thunderstorm bursting downward, yanking impatient fury from above, forming a thousand slingshots heaving all of winter against the frozen mountainsides, slamming into the trees and rocks, deliberately ricocheting straight through Wendell’s advance. The rampage rips the poles from his hands, grabs his legs, flings him upside-down and around like a yo-yo, then lets him fly. He hurtles, discarded, deep in the snow. Rock-ice pellets rat-tat his body, cutting, hurting. Tears icicle, melt just as fast. Salt drips down to his lips, soothing in the warmth. Deadening flakes of snow irreverently cover his body, offering him abandonment of thought. But where had he been going? Why is he struggling to remember where he was going?

Snowlink stirs, and his muffled voice says, “Maybe we should keep moving”

“There is more!” Wendell screams to the winds, and hears his voice cut through thunder, demanding room to drift. He clambers out of the frozen tomb. He crawls, working methodically, groping his way through the blizzard.

At last, at last, he crawls into rhythm.

The morning sun shines bright upon Snowslippery. They say nothing, passion in their meeting. Wendell lies prone on the snow, and eye to eye he spills accounts of cowardice and distrust in hushed communication with the animal who then exchanges all of his anguish for tales of enchanting strength.

He puts Snowslippery onto the tip of the other ski and the three of them turn toward the frozen lake down in the valley.

One ski slides forward. The other follows and passes. A gentle snow-softened sound tarries; momentum carries them toward the end of the game.

They swoosh through the valley, laughing, gallantly riding their speeding shadows back to the thrower-of-the-snowballs, chasing it back across the lake. They saw it waiting, saw its jowl drop in a moment’s confusion before it turned, before its howls commenced to spread through the winter in imminent defeat, before it stopped and squared off in desperation.

Arms, legs, massive bones of snow, and tiny balls of snow-fur collide in a timeless frame of synchronous rhythm as Wendell speeds out of the game into freedom, howling triumphantly on his way to the other side of the lake.

Tis the season for magic and myths, the deepest, whitest parts of us as people. – tyler malone

Beth was born and raised in Modesto, CA in 1945, moved ever northward to Sacramento, Roseville, Lincoln, landing near Chico in the foothills of Northern California in 2004, where her three siblings had already migrated, surprisingly, one by one . She took early retirement from Hewlett Packard after working there 21 years. Prior to HP, she was sole proprietor of a typing service in Sacramento (remember Selectric typewriters?). She is a Christian and attends Chico Grace Brethren Church.

Her passions have been fast-pitch softball, and writing. Her favorite football teams are the San Francisco 49ers, and the Cleveland Browns (for their uniforms). Beth enjoys photography (‘point-and-shoot’), reading, communing with her cats, first summer warmth and first winter rain. Her poetry focus has leaned toward the journey from, and to, God; also, watch what you say--a word, a phrase, are flies for the flycatcher.