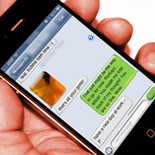 I wished I’d never picked up the phone. But obeying drunken friends was a familiar formality so they wouldn’t swing or cry. Listening to inebriated chicks I’d never met turned out to be a different situation altogether. Unfortunately, it was second nature for me to follow instructions.

I ended up driving to meet her, that drunken girl in my phone. Somehow, when the texting spree began, my morals caved in. I forgot about Rinko, the girl waiting for me across the Pacific. I had to seize the day by the skirt. And my friends would not let me forget it. Sometimes, I couldn’t tell the difference between advice and threats.

The radio blasted Fun on my stereo. Whenever I sang, it pissed off my friend Daniel because he thought he was the best singer in our circle of friends. I hated singing, but I didn’t want to hear talking.

This all began a few nights before, when I was with Daniel and his friend whose name I didn’t get. Daniel bitched about this fat girl he barely knew who bugged him all night to come over. Then her friend got involved in the call. Daniel’s friend whispered, “Fat girls have hot friends.” We all took swigs of Sam Adams.

Daniel handed me the phone. Within the first fifteen-minutes, I got PG, PG-13, then R-rated pictures. She surely was sexy, we agreed. His friend said she was probably a hoe. Being a 23-year-old flirting with an 18-year-old made me feel like a scumbag and a big shot at the same time.

The next night, Daniel badgered me about why I wouldn’t hook up with her.

“You need to look out for yourself, bro. You need to be the number one in your life. You only live once…” and more shit I wanted to go in one ear and out the other, but it got stuck in the first ear, like hardened ear wax.

On the car ride finally to pick up the girl, Daniel changed the radio station. She said she was going to be with two girls, so I brought two guys, Daniel and Kerry, a stoner. Like me, Daniel had a girl, but he tagged along “to keep us out of trouble.”

Nothing went like I hoped. I could only watch for the rest of the night. If I tried to say something, one of them cut me off. Their hands were on each other’s thighs like they belonged there. When she departed, he got a hug and I got a wave. The other two girls said it was late. To them, 10 pm was late. But then, she and Kerry had a heated conversation in private.

As I drove the guys home, I received a text from her. She asked how many people saw the pictures she sent me. In the next text, she told me to delete them.

“I just wanted to tell her I thought she was attractive.” Kerry played on his cell phone.

Neither of us spoke after that.

I got to my parents’ home and tried cheering myself up since I was down. After finishing two-thirds of a Captain Morgan bottle by myself—it was demandingly difficult to find in the East—I woke up the next morning with a raging headache. My Smartphone alarm rang as annoying as a smoke detector low on batteries.

He said he had been up all night, lost in her messaging mania, just like I did before we met. The night before, I texted her that I was only in town for one month, and she texted me back about how we should make this a “memorable month.” Endearments began her statements. “Babe, this.
Sugar, that.” At times it felt as impersonal as porn-stars’ cupid talk.

I told Kerry to stop texting her.

“Why would you even want to hook up with her when you have a girl back in Japan?”

“You should be at home writing poetry for your girl.” He inhaled something.

“Bros before hoes. And she is a ho.” Kerry sucked in air again.

I figured I’d give him some pointers, since he hadn’t been on a date in a while. The thing about hoes was that they didn’t care what you looked like, nor did they care about how funny or nice you were. In fact, guys shouldn’t be nice, probably the one attribute that matters. No wonder
a five-foot-six hot brunette would be rapid-texting an ugly asshole like Kerry.

“Have fun wacking off.” He laughed. That was the last we spoke.

But my thinking changed after jerking off. I deleted her number, tempting texts and those lascivious pictures, even the nude of her leaning over. After that, I followed suit with Rinko. One less person to report to meant one less reason to get stressed.

I decided to make a sandwich. A sandwich would definitely hit the spot. I couldn’t care less about the g-spot. The I-spot is most important: I am number one.

Chris is a young scribe from Chicago who teaches English as a Second Language in Korea. After graduating college amidst a recession, he stopped stalking the American dream of a white-collar career and began writing fiction. His work has appeared in The Stone Hobo, Curbstone Collective, The Path, Linguistic Erosion, and Pulp Metal Magazine, among others. He is hard at work on a manuscript.