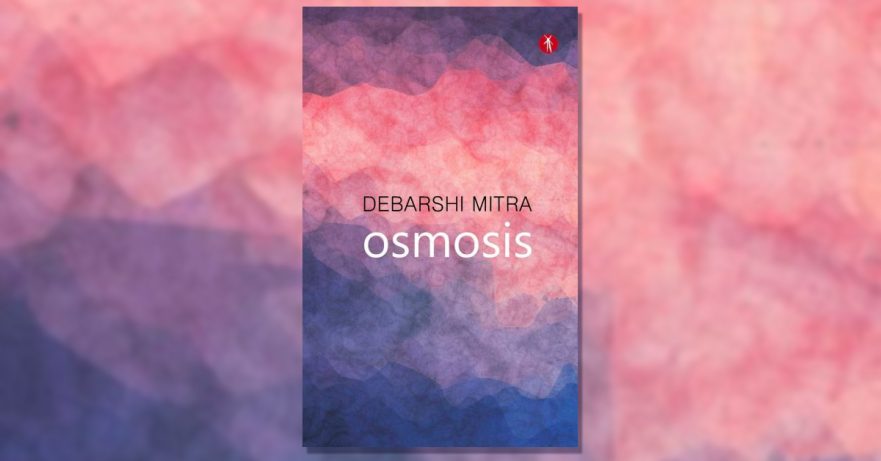 In the introduction of Debarshi Mitra’s poetry collection, Osmosis, the author tells us that this book represents his attempt to crystallize the “moment,” and that this impulse stems directly from his interest in Zen Buddhism and physics. Being interested in how science and spirituality connect and intersect, I wanted to read this collection.

In one of the opening poems, “On Arrival,” Mitra writes:

The air is stiff,
the walls have gathered
cobwebs and dust,
as is expected of course.
The floors have
shoe stains on them.
The bedsheets have developed
signs of neglect.
My books and other things
are exactly where
I last saw them
where they always were,
only my mind

There is a certain isness to this poem, as if the author is trying to get out of the way and present things simply as they are. Despite the attempt, we as writers, as beings with minds, always get in the way. For example, the bedsheets aren’t just bedsheets; they show signs of neglect. Without getting too philosophical, I can see Mitra struggling with Kant’s notion of Ding an sich, or the thing-in-itself. We never see things as they inherently are; we see them through the lens of our minds. What would things look like as they are? An infinite series of portals nested in an infinitely sided polyhedron spinning in an interdimensional tesseract. Or perhaps things would look scary and weird like a fly’s head magnified a thousand times.

Is there anything more we can ask of poetry but to make us ask questions? I think not.

The poem “Ephemera,” describes the kind of moment the author sets out to capture. Ephemera is defined as “any transitory written or printed matters that are not meant to be retained or preserved. The word derives from the Greek ephemeros, meaning “lasting only one day, short-lived.” There’s nothing more to be said other than the snapshot of a captured moment. A moment that will largely go unnoticed in the vastness of the universe. A moment that will vanish as soon as it passes, as if it never happened.

In the dead of the night
a raven returns
to her fledglings.
Trapped in her beak
a worm
wriggles in the moonlight
like an unformed dream.

Are our moments like this? Are our struggles like the wriggling worms? Here one moment, then snatched away by the jaws of death. Sometimes we are the raven, stomping on the life of an innocent ant, or whacking an inconvenient roach that startles us running across the floor. Or we cook a slaughtered chicken, garnishing it with herbs and spices; its delightful aromas wafting from the oven as it cooks. Even I’m not really sure where I’m going with this. I’m just following the footsteps of the poet. Walking down the mental paths he has created with his words. It’s all fleeting. It’s all a matter of perspective.

In “Gestures,” Mitra takes us on a journey of rays of light that have traveled through the universe. I imagine he means the first rays from the Big Bang that exploded from the singularity creating this incarnation of the cosmos. The rays morph as they move through space, time, and being. Extending across space and time, the rays eventually materialize in human touch, in sudden foggy moments that spark in our minds. The rays, like the filaments of string theory, connect the quaking thunder that spawned the universe to the melting glaciers and even to our own outstretched hand. All phenomena are connected, sentient and non-sentient. There is an invisible web that ties all together. Perhaps human touch existed in that first moment of creation. Is time like a lake where everything happens all at once?

and a sense returns
of having forgotten
what was once
treasured, walking
each night through
memory’s foggy streets
as the years roll by tracing
the globe’s trajectory
in space,
coming undone
by these stray moments
of inertia
while the gears
sputter to life,
while glaciers
gradually melt,
while sleep
visits the eyelids,
while a filament
glows in the dark
like an outstretched hand.

This reminds me of the notion of action at a distance in physics. Action at a distance is defined as the concept that an object can be moved, changed, or otherwise affected without being physically touched by another object. That is the nonlocal interaction of objects that are separated in space. Getting into the thorny details of Quantum Mechanics may be above my pay grade, but I’m the one writing this review. I think it’s fair to say that we exist in a cosmos that defies our understanding. We are like ants crawling in the dirt, unaware of the vast world around us. Perhaps the ants are geniuses and humans are here to serve their interests. The point is we mostly concern ourselves with what’s in front of us; with what we have to deal with in the relatively short term. We don’t live most of our lives contemplating the vastness of the stars, the depth of oceans, the lives of salamanders – all at once. We mostly inhabit a thin sliver of reality. Do my shoes match? Does that pimple make me look funny? Does my mother-in-law like me?

Mitra continues to tackle the interconnectedness of phenomena in his poem “Melancholy.”

I love the notion that time mixes with the vaporous steam of coffee. And as we mere humans grapple to comprehend this magnificence, all we can do is fall short of its profundity. As soon as we try to articulate these misty inchoate connections, our words can only crumble into silence. Silence, in other words, better conveys the thing-in-itself than we ever can. It just is.

In the poem “Into the Dusk Charged Air,” the poet reminds us of the fleeting nature of reality. While poets are concerned with words, the sunsets pass, shadows come and go. The here and now is all that matters. The moment. A single breath.

let the poets go.
let their words too pass
from your lips to oblivion.
From sunset to sunset
watch the shadows gather
and speak in muted verse,
these invisible legislators
with their silent acknowledgment
of us right now
being here.

When I first read the poem title “Pensieve” I thought that perhaps my eyes weren’t seeing the word correctly, or could it be that the poet misspelled the title of the poem? But then I looked up the word. The Pensieve is a magical object used to review memories. It has the appearance of a shallow stone or metal basin, into which runes and strange symbols are carved and precious stones are fitted. It is filled with a silvery substance that appears to be a cloudy liquid/gas; the collected memories of people who have siphoned their recollections into it. I don’t know if the word Pensieve comes from Harry Potter, but it’s used in the stories. Pensieve is a portmanteau, combining the words ‘pensive’ and ‘sieve.’

On some mornings
you think of rain and
the sky opens up,
turns dark grey,
rain begins with
a single teardrop forming
at a corner of your eye
while your mind wanders
from here to elsewhere
where land ends
and the sea begins,
you watch a raindrop
falling on a puddle
and call it time.

After reading the poem a few times, I asked myself: Is the poet suggesting that the sky is a Pensieve? Is it the teardrop forming in the corner of your eye? Perhaps there are multiple Pensieves occurring in our experience. Like a house of mirrors, there is an infinite number of magical windows offering portals to other realities. To discover them, we have to open our third eye. Our lack of vision is our own responsibility.

Perhaps more than most years previously, we need courage and vision to look forward to 2021. We need inspiration. If you want to be inspired, to lift your imagination, get a copy of Osmosis. The poems are short and delightful. They capture the fleeting moments in human life that swirl in the wind past our eyes.