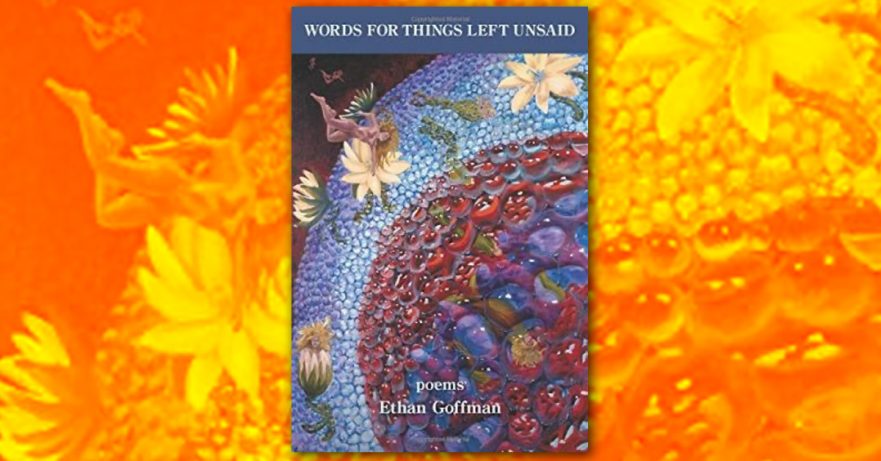 What stands out almost immediately about Ethan Goffman’s poetry collection Words for Things Left Unsaid, is that his poems often read like speculative fiction, asking what-if questions about reality, science, and history.

In one of the opening poems, “Taxonomy of History,” Goffman writes:

There are three main branches in the study of History:

The last, less respected than the others,
is sometimes known as The History of One Damned Thing After Another.

There are three even less reputable branches of history:

Most historians don’t recognize these branches. Even some of the more refined poets scorn them.

I am in the less reputable camp I suppose. I’m interested in the history of the future, of what might have happened and of what never happened. In fact, if you ask me, a student of Buddhism and Philip K. Dick, I will venture to say that time isn’t linear, but is cyclical. That the future has already happened. And as the seasons cycle, Fall only appears to come after Summer, just like night only appears to follow day. It all goes round again, like the carousel of life.
Not to mention that, from a quantum mechanics perspective, as some have proposed, there is an infinite number of multiverses where everything happens. Heavy stuff, right?

This notion of the perceived distinctions of natural phenomena is human imposed, I can imagine Goffman saying. Perhaps I’m putting words in his mouth. But I’m willing to take that risk.

The poem “The Oblivion,” continues the theme of no opposites, adding the notion of human destructiveness, perhaps implying that our lack of awareness of cosmic cycles contributes to our short-sightedness. Maybe if we saw ourselves as continuous with winter, with the forests, with the universe, in general, we wouldn’t focus on the brevity of our human form. After all, everything in the Milky Way, on the earth, and in our bodies is made from stardust. And our physical bodies, though of course real enough to us (just try stepping on my toe), are only perceived as being solid. At the subatomic level, we are loosely connected; there is more empty space between our sub-atomic particles than there are particles. We are practically ghosts.

North is the opposite of south
yet also the same
if you go far enough
you get where you came.

We arrive at winter every year
the primeval frost
the frozen soul within us
and without.

Without us the planet still revolves
around itself
an infinite journey to oblivion.

Our own journey is much shorter.

Whether we face
nuclear winter
or climate change summer
how capable we humans are at finding
ways to destroy ourselves.

Fire and ice
Summer and winter
swallowing each other.
Yin is yang is yang is yin
Ping is pong is kong is king.

There are no opposites
Just a continuous line
North
to a blurring, frigid white.

Indeed, there are no opposites. There is continuance. But our minds get in the way. Our minds timestamp every moment. Most of us regret much of the past, worry ourselves to death in the present, and fear the future. Do you? I know I do. I’m not above this shit either. I too am caught up in Maya, the magician’s illusion of reality. We’re all chasing phantoms. Even more interestingly, even though we’re chasing phantoms, most scientific materialists think that believing in the paranormal, in ghosts, aliens, time-travel is silly. Yet, our source for the illusory nature of time and space comes from science. Curious.

In the ominously titled poem “The End,” Goffman asks the questions we’d all like to ask. How do we know if we’re dead? Perhaps we are already dead, or perhaps we never die. Maybe we are all one mind. Maybe we’re bacteria in the guts of another being. And if so, why the fuck do I have to get up for work tomorrow?

Life goes by so fast
before you know it you’re long dead.

But how do you know it if you’re dead?

I’d like to stick around to see how it all ends
for the poor perplexed human race
but don’t want to take the trouble
to slog my way through
history’s interminable march.

It would be nice to be an omni-consciousness
watching life like a movie
The grand sweep of it
The drama, the passion
the cast of billions!

One thing I’d ask Goffman, since he’s throwing out speculations like rice at a wedding, is, aren’t we already omni-consciousnesses? I am he as you are me and we are all together. Aren’t we the universe made conscious? Is it possible that only until we, as a species, come to the collective realization that when I hurt you, I hurt me, that when I chop down trees, I cut my own limbs off – only when the entire human race experiences this realization in one thunder clapping moment will we evolve spiritually? Then we may know our true selves. Until then, we are swine in a pig’s trough, pissing and shitting in the water we drink, poisoning the air we breathe.

Perhaps we’ll survive into unimaginable futures
spawn vast galactic empires
evolve beyond our imagination
become the omni-consciousness.
It would be nice to see it all,
but who wants to live it day by excruciating day?
Like a kid who can’t stand to read through the whole goddamn book
I’d just like a peek at the ending, please

In the second part of the book are a few anti-Trump poems. Let me just say that I think Trump is a piece of shit and is the embodiment of selfishness and materialism that will destroy the planet and humans. I’m with you on this Goffman.

Resuming his philosophical questioning in the form of poetry, Goffman continues his exploration of cycles and his philosophy of benevolence and love, as is exemplified in “Laughter Makes the World Go ‘Round.”

I can’t spread love
because I just don’t have enough,
but I’d love to spread laughter
carry it like cash
spilling from my pockets,

hand it out to strangers, friends, colleagues,
even enemies
as tips
as advice
as succulent nibbles.

Laughter is double edged.
Anger is its father
a blade that slices
leaving raw wounds in tender flesh.

So I won’t spread anger
and I can’t spread love,
I’m no cupid with a quiver full of arrows;
my love quiver is straight out empty.

What arrows I do have are more ambiguous
with spikes and perforated edges;
I’d love to shoot them about randomly
aiming straight and true.

Laughter in my quiver
laughter in my pocket
an ointment rich and creamy
cool and invigorating,
a salve that transmutes
water into wine
pigshit into gold.

all the anger and bitterness in the world transformed into
an arrow tip, a sticky barbed mass that twists itself
straight into the bleeding gut
yet somehow heals.

This poem might have been written by the Buddha. But here’s the paradox: when we think we have finally been able to love the universe, when we think we have achieved nirvana, maybe then we are fooling ourselves. Is it possible for us to truly turn the other cheek without eating our hearts out? Maybe the best we can do is laugh at ourselves and our pettiness. And the second we think we’ve got it all figured out, we’re then revealed to be shallow shitheads. Or possibly, when we can absolutely love all things, truly and honestly, we will have achieved something worthy. Laughter might very well turn out to be the secret to high knowledge. And when we laugh, we are one with the pig shit and the gold.

Get a copy of Word for Things Left Unsaid. Laugh your ass off. Get some wisdom in a bottle. When you find yourself watching the wheels go round and round and when you’re no longer riding on the merry go round, maybe, just maybe, you will let it all go.