Darren Demaree’s poetry collection, Lady, You Shot Me, is about the life of Sam Cooke. Before reading these poems, I knew very little about Sam Cooke, other than his music. But, after reading this collection, I was inspired to learn more about him. You should know that this collection doesn’t just praise Cooke, or attempt to paint a pretty picture of the man. 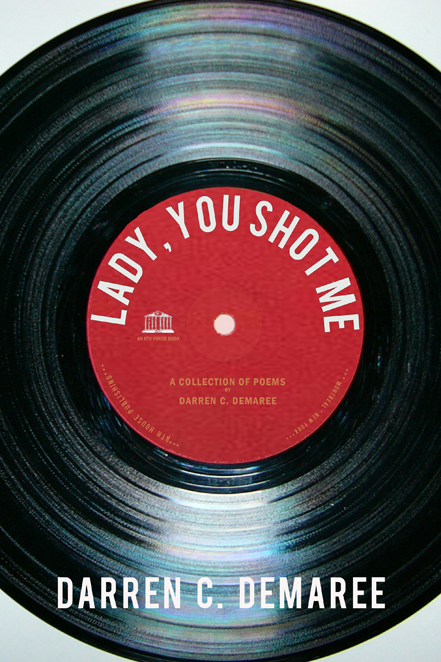 Not only does Lady, You Shot Me address the unique genius of the man, the writings tackle difficult subject matters about Sam Cooke’s life, as well. His impact on African-American history. On American history. The dubious nature of his death. His womanizing.

Inspired by the collection, I watched the Sam Cooke documentary, ReMastered: The Two Killings of Sam Cooke, released in 2019 by Netflix. From the documentary, I learned that Sam Cooke was deeply involved in Civil Rights. It then became clear to me that the song A Change is Gonna Come was just one example of Cooke’s lifelong dedication to Civil Rights.

Lady, You Shot Me got me excited to learn more about Sam Cooke and to listen again to his music. In fact, I put on his music while I wrote this review.

But back to the poems.

Damaree commences his collection with the poem January 22, 1931, where Sam Cooke and so much of the story of American music begins: in the Mississippi Delta.

Even the Mississippi Delta
possesses a caped heart
& everything that is used to
flooding, floods in joy
& deconstructs in joy
as well. Some floods, though,
simply wash the legs
of a child clean
& that is the opposite
of a shipwreck.
That constant
ebb spreads to cape
another heart,
spreads to protect joy,
to let the man find song

Yes, the Delta is one of the beating hearts of America. In the Delta, where blood, misery, water and art all meet. The American Heart of Darkness. In that mix of mud and death, both hideous and wondrous phenomenon emerged. The American song tradition, from Scott Joplin, to Louis Armstrong to The Roots all find their beginnings in the Delta. The horror of slavery, of segregation, of plantations, of Jim Crow, boil and fuse. And yet, despite this, or maybe because of this, the Delta has given birth to so much American art: the blues, jazz, and the Harlem Renaissance of James Baldwin, Nella Larsen and Langston Hughes. America would not be the same country without the gruesome history of the Delta.

In Crop, Demaree writes about Cooke’s unique ability to launch his majestic vocal style. And while I’m listening to Cooke, I’m taken on a ride into the sky. But now, as a result of these poems, I am also reminded of how his life was cut back down into the earth. “Crop” can mean “a cultivated plant that is grown as good.” It can also mean “a group or amount of related people or things occurring at one time.” As a verb, crop can mean to “cut something short.”

Some shouting
leaves the song
before the stalk
has been granted
any weight at all
& that loop washes
nothing in the dirt
& rises, rise
with freedom.
Some songs
begin with a tether,
but they never end
that way
& if they try to
they become hymn
for a God
that might allow
such harness
to be attached
to the rockets
of one man
opening
the back of his throat
to charge the heavens.

And so while I sit on my couch listening to Cooke’s You Send Me, I am thinking of all of the flight in his voice. That Cooke’s voice could charge the heavens, could scoop some bit of the firmament with his smooth delivery. And yet there was pain in his voice. A pain wrought in the shouts and hollers of the Delta. Cooke could make “mercy sound good.” How can a sound forged with so much suffering bring forth such joy? A voice cut short in life. Cut down. Shot down.

But Cooke was no easy character. You couldn’t fit him into a cozy box. All of the gifts that were bestowed upon him came with their cost, too. As Demaree writes in The Gorgeous Sam Cooke:

The light can cluster
& collect the hotlings
& lead any god out
of the room. That is
how he took over
all of those small chapels
& those daughters
of the traveling preachers.
He was gorgeous

Sam Cooke’s story is complex. However, you don’t have to be a historian to get the message of these poems. I am reading and listening to Sam Cooke’s life and death story in poems. I know this story. You know this story. In Lady, You Shot Me #7, I hear the echo of Black Lives Matter.

He wanted to give away
his heart
& the police
in Los Angeles
wanted to catalog his heart.
They did the least
they could.
the absolute least

Demaree’s poems orbit around the moments and incidents of Cooke’s death. We’re not really sure what to believe. Was it a setup? Was he robbed for flashing his money around? Was the killer exploiting Cooke’s womanizing tendencies, hoping that would help in the cover up of the story? Or did the establishment want to stifle the protest in his voice? The poems leave me with more speculations than answers. I can only say that Martin Luther King, John F. Kennedy and Bobby Kennedy were murdered in full view. Their assassinations were as visible as the moon landing. And purposely so. The idea was to kill a voice in broad daylight for all to see. It’s not hard to imagine Cooke was cut down for similar reasons.

The air, thick
with gun smoke
from three bullets
fired into
the violent, spoken
words of a man,
hung the man,
hung the words
as a ghost
that found
no cloth to soak
or light to catch
& yet, he said
these words to touch
the disturbance.

You should read these poems. They are thoughtful and multi-sided. I can assure you that you will be left with different feelings about Sam Cooke. Sam Cooke was a human being with faults like you or me. When all of us are perfect, none of us will be human. Demaree’s poems bring to life the songs and story of Sam Cooke that will endure forever.